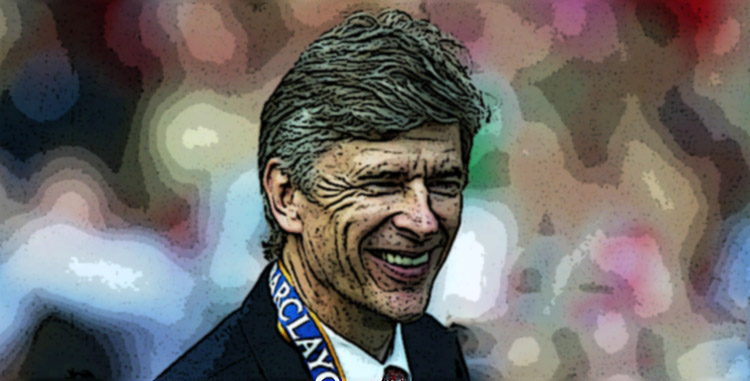 When Martin Keown played a long ball from inside his own half. Dennis Bergkamp headed it up in the air, Nicola Anelka flicked it on and Marc Overmars nodded it forward, drove into the United area and fizzed a shot between Peter Schmeichel’s legs.

When Christopher Wreh smashed one in against Bolton. When Steve Bould fed Tony Adams on that sunny day in May against Everton and the captain buried it with his left foot. When Overmars and Anelka scored the goals at Wembley to win the FA Cup and the double, and Alan Shearer was sad.

When we used to play Manchester United and all day you could feel the nerves build and when the games were on you didn’t have just butterflies in your stomach you had bats, and moths, and possibly some small singing birds. It was a rivalry that meant so much and provided so much and it was absolutely brilliant.

When the players did ‘we’re not worthy‘ to Pires. When Ray Parlour reminded everyone ‘Its only Ray Parlour‘ and Freddie Ljungberg left a young John Terry flat on his face before curling home a brilliant shot to make it 2-0 in an FA Cup final that took place before winning the league at Old Trafford when ‘WILTOOOOOOOOOOOORD’. Lee Dixon warming up behind the goal celebrating as the ball hit the net and another double was sealed.

When Pires scrapped home a goal in an FA Cup final in 2003 when our central defensive pairing of Martin Keown – who required injections in every bit of him to play – and Oleg Luzhny played a blinder. Oleg and Seaman high-fiving after the game.

When we beat Everton 2-1 on the opening day of the next season and you weren’t even that worried after Sol Campbell got a 25th minute red card because you knew we could cope.

When Vieira kicked out at van Nistelrooy at Old Trafford and got sent off and afterwards everyone called him a cheat. When it was made all the more sweet by the fact he missed that penalty and then Keown did Angry Starjump man and Lauren throttled a terrified Phil Neville and James Lawton said Arsenal were ‘sickening, brutish and disgusting’, but we loved it.

When we went to the San Siro and Thierry Henry roasted the brilliant Javier Zanetti to score Arsenal’s third in a 5-1 win.

When Henry made what was potentially a very bad Good Friday in a great Good Friday with a hat-trick against Liverpool. Jamie Carragher still has a bruise on his arse from the way Henry left on him it to score the third to put us ahead and if Highbury had a roof it would have come off but it didn’t and noise spread across North London like a blanket of celebration and joy.

When even their players thought the draw was enough. When Thierry Henry remembered:

“I remember Tarrico, jumping around and he got a cramp out of it. Celebrating a draw! And I looked at him and said ‘Are you kidding me?’ And he went, ‘Yeeaaaaaaah!’ jumping in front of me.

“I said to him: ‘You do realise we just needed a point at your place to be champions at your place.’ And he was talking, talking, so I said ‘Watch me after the game.’

“I remember, people were saying do not celebrate. I said ‘WHAT?’ I will celebrate. And you will see how much it’s going to hurt them. “I had to celebrate. They were coming up to me, jumping around like they had won something, so I said, ‘Ok. We were not supposed to celebrate, but now I’m going to celebrate with my fans!”

When, on the final day of the season, having fallen behind to Leicester, Dennis Bergkamp unlocked their defence and Patrick Vieira rounded the keeper in nonchalant style to make it 2-1 and ensure that we ended P26, D12, L0. A feat that remains unmatched to this day, when Arsenal became Invincible.

When we won the FA Cup in the most un-Arsenal way possible. A dour, defensive, somewhat lucky day against United, when they did everything but score, and Reyes got sent off and Jens Lehmann saved from Paul Scholes and then Vieira’s last kick off the ball as an Arsenal player was to win to win the cup.

When Fabregas came of age as we won at Real Madrid. When Reyes got ‘injured’, rolled off the pitch then rolled back on to ensure the game got stopped. When Henry scored that goal at the Bernebeu.

When we got to the Champions League final with a back four of Eboue, Toure, Senderos and Flamini. When Jens was hero in Villarreal and even when he might have been villain in Paris, we stood and sang at the end of a game we lost and the hairs stood up on the back of your neck before the rain that night washed the tears away.

When time passed and things became more difficult but we all knew we were just two players away from being great again.

When Per Mertesacker stooped to head home against Wigan with just 8 minutes to go. When Lukasz Fabianski made up for many things with his penalty shoot-out saves.

When Santi Cazorla cracked home a 30 yard free kick in the final after we’d conceded twice in the opening 7 minutes. When Laurent Koscielny hooked home an equaliser. When Giroud back-heeled to Aaron Ramsey and he prodded home the goal that won the first trophy in an unspecified number of years. When we celebrated that Together, at Wembley, in London, all over the world.

When we enjoyed another beautiful day at Wembley and made Tim Sherwood implausibly sad. Walcott, Alexis from 25 yards, Mertesacker and Giroud, and when we remembered that we were so worried about Cristian Benteke and we laughed.

When we remembered that for all the disappointments and frustrations, that even if change feels inevitable and necessary, there was one man whose teams gave us all those moments and memories and feelings that live on even today.

When Arsenal announced their new manager in 1996 and everybody went ‘Who?’ and Tony Adams said ‘What does this Frenchman know about football?’.

And here we are.