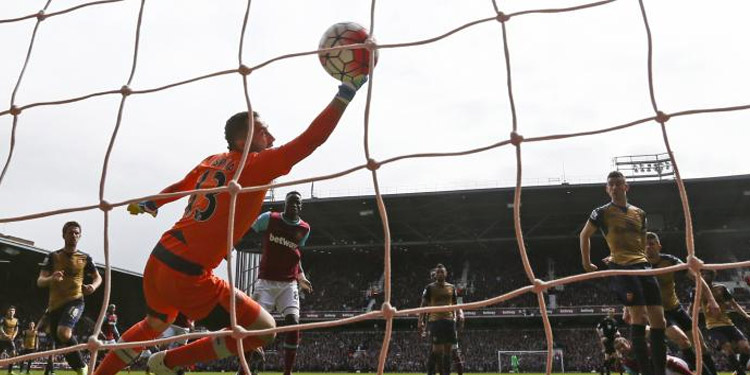 The early kick-off yesterday means that plenty of time has passed, but the frustration felt at yesterday’s result is no less acute.

From 2-0 up and playing well, we hit that big old self-destruct button once more, allowed Andy Carroll to look like Zlatan crossed with Alan Smith, and only a Laurent Koscielny goal salvaged a point from a game we needed to win, and one that we really should have won.

For many it was a microcosm of our season – and not just this season. To me it was a masterclass in stupidity and showed that this team, despite its talent, clearly lacks common sense and leadership. At 2-0 up, minutes before the break, you don’t go hell for leather for a third. You don’t push up and leave yourself exposed.

You consolidate, you stay organised and compact, and you take that two goal lead into half-time. From there, you can set your stall out accordingly for the second period, and frankly it should have suited us down to the ground. Do what we’ve done quite well at times, sit off, don’t get stretched, and as the team that must score takes more risks, then you use those spaces to hit them on the break. We had the pace, the power, and the creativity to do that, but instead we went in rattled by conceding twice.

We ought to have been behind, a Lanzini goal was chalked off for offside when Hector Bellerin played them on. But having taken the lead in the 18th minute through Mesut Ozil, after a lovely pass from Alex Iwobi, we doubled it in the 35th when Iwobi again was provider, clipping a ball over the defence for Alexis. His touch and finish made it 2-0 and from there we had the platform to go and win the game.

Look at this situation which West Ham fashioned after Iwobi had rather carelessly given the ball away in midfield.

Firstly, there’s no pressure at all on Cresswell, and for a guy who rightly wins plaudits for how hard he works, the lack of tracking back from Alexis all game was notable. Afterwards, Laurent Koscielny was critical of the lack of defensive cover, saying:

You can’t let them get a cross in easy because they have some good players on the wings. It is a job for everyone, not just the defenders. The guys on the flanks need to help their team-mates with defending.

Quite pointed, and quite correct, but you can also defend better. It cannot be a case that Koscielny and Gabriel aren’t aware of what Carroll likes to do and how he likes to do it, Koscielny in particular. So why you stand off him and allow him a run at a cross is beyond me. He should have been much tighter to Carroll, Gabriel was there to cover, Monreal had the other guy. Instead he stood off, Carroll outmuscled Monreal who at least tried, and he planted a header into the bottom corner.

It’s basic. Arsene Wenger saying afterwards that we’ve had a weakness in the air all season doesn’t make it any easier to take. You don’t even need to be a grizzled old centre-half, or 6’10 to deal with this kind of situation. It’s just awareness of what your opponent is going to do, and then making it more difficult for him to do it. The ball hit the net at 43’49.

Shortly afterwards West Ham won a corner. Ospina chose to punch, the ball came back in and not a single Arsenal defender – especially the two centre-halves, had any idea where Carroll was. The ball came back in, not one of them took a look behind them. He got a bit lucky when the ball rebounded back to him off Gabriel, but he then fired in a shot off the Brazilian and past Ospina for 2-2 at 46’30.

The second half began with another West Ham goal disallowed, this one rightly for a foul by Carroll on Koscielny, but the indecision between the defender and goalkeeper was obvious. They didn’t have to wait too long to go ahead though. Antonio roasted Monreal to loft in a cross to the back post where OBVIOUSLY 5’9 Hector Bellerin is the man to mark 6’4 Andy Carroll.

The header was headed into his own net by Gabriel when it looked as if Ospina had it covered. The Brazilian is a tidy footballer, but an unconvincing defender. His partnership with Koscielny reminds me a bit too much of when the Frenchman played alongside Thomas Vermaelen. Two rather similar players who lack balance as a pair.

The captain did get a goal back as we threw on Ramsey, Giroud and Walcott, leaving us with a central midfield duo of Iwobi and Ramsey, but in the end we couldn’t find a winner. In the last 8 minutes Arsenal had no shots to West Ham’s three (via By the numbers). At full-time Andy Carroll, a man whose last start in the Premier League was on March 13th, had 10 attempts on goal and a hat-trick to his name.

Good old Arsenal, making bog-standard players look like world beaters time and time again. Although you might also draw some conclusions about the level of our own men because of that. Having put ourselves in such a strong position to then only come away with a point is immensely frustrating.

There are some who would suggest Carroll shouldn’t have been on the pitch, I thought his hack at Koscielny was borderline red, but that makes no difference. He was on the pitch, and we failed to deal with him properly. Nor did we react when it became clear he was such a threat.

The decision to select David Ospina over Petr Cech was also a talking point. The Colombian has done well in recent games, but unless there are still fitness doubts over Cech, playing a keeper who rarely comes off his line played into the hands of a team who played like West Ham did yesterday. I wouldn’t fault him for any the goals, but I do wonder how different it might have been if we had a keeper who can dominate his area the way Cech can.

The manager’s post-game comments seemed to suggest it was a decision based on recent performances rather than necessity, although he often keeps that kind of information to himself. Another week of training should leave us in no doubt that Cech is back to 100% and he should come back into the team for the next game. You might also question if the decisions are being made based on performance, why Joel Campbell didn’t even make the bench, but that’s a different thing, I guess.

Ultimately, this is a film we’ve watched before. Familiar failings, defensive weaknesses exposed, a brittle mentality that has been the hallmark of Arsene Wenger’s teams over the last decade. We, or he, can’t seem to do things any differently. Elsewhere the realisation that if the manager can’t change you have to change the manager would precipitate a reshuffle.

But this is Arsenal where that kind of thing just isn’t going to happen. What vague hope there was of a miracle has well and truly gone now, and what we have left to play for this season is to finish as high as we can … hopefully above Sp*rs.

And that really says something about where we are and how we’ve got here. Sorry if it’s all a bit gloomy, but I’m only human.

Till tomorrow when James and I will have an Arsecast Extra for you. Have a good Sunday.