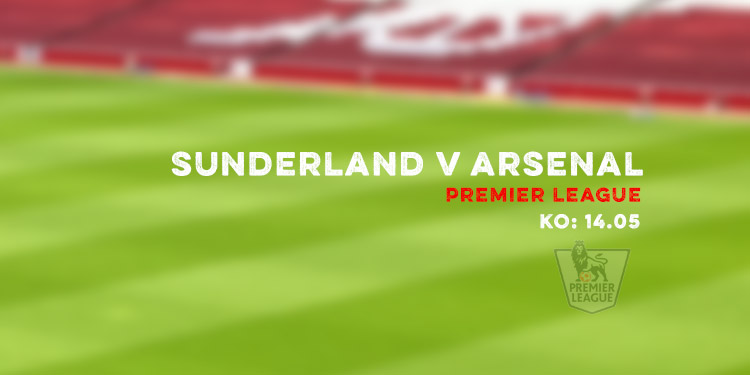 We have Premier League action today as we travel to the Stadium of Light to face Sunderland.

As ever when you face a Sam Allardyce side at home you know you’re going to face a physical test, and that will be especially true today as they look for points to help them out of the relegation zone. It’s never easy facing a team who are fighting for survival, but there’s a real need for us to get something out this game. Man City won comfortably yesterday against a Stoke side that couldn’t give a fish’s tit about the rest of this season, so we need the win to go above them.

It will be interesting to see what the manager does with the team. I suspect the defence will remain the same, with Mertesacker keeping his place alongside Koscielny, but will he, away from home, re-introduce the Coqeneny partnership, or stick Ramsey and Elneny. I thought it worked pretty well the other night, especially as the Welshman was much more disciplined than he had been at times this season.

Up top Danny Welbeck should come back in for Olivier Giroud. Giroud had a chance to give Wenger something to think about the other night against West Brom, and while he had a good second half and held it up well, the lack of end product is a real worry. It’s January since he scored in the Premier League and Welbeck has looked sharper and brighter up top. I expect him to come back to face a club where he spent a season on loan in his Man Utd days.

There’s not a lot to say about it really, other than we need the points, as do they. They might be a bit more desperate for them than us, but in terms of overall quality if we perform we should have too much for them. This is Arsenal, however, so you just never know.

We played on Thursday, of course, so there might be worries about fatigue. Those concerns have been downplayed by the manager though, who said:

It’s no problem. In fact, there’s a very interesting study that has come out from Uefa that shows that the points taken by the teams three days later are not less than after four or five days. It’s the opposite and that is quite interesting. The study has been made in all the five best leagues in Europe. Nobody has proven that it is a disadvantage to have only three days rest. The points on average are better than after four or five days.

So, there you go. We have literally no excuse.

If you’re out and about today, remember you can keep up with the game on the Arseblog live blog. Works on your phone, tablet or whatever else, so you don’t have to miss a kick.

Meanwhile, Arsene Wenger has thrown Theo Walcott’s Arsenal future into some doubt. Asked if he’d be at the club next season, he said:

I don’t know yet. I’m not in transfer mode at the moment but I think he has gone through a bad spell. He has responded very well, because he said: ‘OK, I will work harder and more.’ When he comes on now, you see he is motivated and focused. Let’s see how well he finishes the season.

Well it’s definitely not an ‘I want to keep him here’, is it? It was also quite amusing that he suggested Walcott’s frustration at not playing was shared by other players. He cited Santi Cazorla (not fit yet), Mikel Arteta (stepped on Lego), Mathieu Flamini (saving the world), Jack Wilshere (not fit enough yet), and Alex Oxlade-Chamberlain (unfit and out of favour) as players who would also be aggrieved at not playing much recently.

Only Joel Campbell from that list could have any reasonable grounds for dismay at not being picked, and given the respective contributions this season the Costa Rican would be right to be cheesed off if Walcott got the nod ahead of him. Walcott is fit and available, but not being picked, and that tells its own story. The manager’s frustration with him has been evident in recent times, and I do think we’d be open to letting him go this summer.

The £140,000 a week wages might be seen a stumbling block to any sale, but the Premier League is awash with cash, and filled with clubs and managers who routinely spend ludicrous amounts of money on players of all shapes, sizes and abilities. I don’t think we’d have too much trouble finding a buyer if we decided to sell.

Finally for this morning, here’s Ian Wright giving ‘The Arseblog’ a shout on BT yesterday. I mean, that’s great enough in itself, but the ‘The’ made my day.

Right, I’m gonna make some breakfast, walk a large dog until his tongue is hanging down the ground, then football. Catch you later for the game.