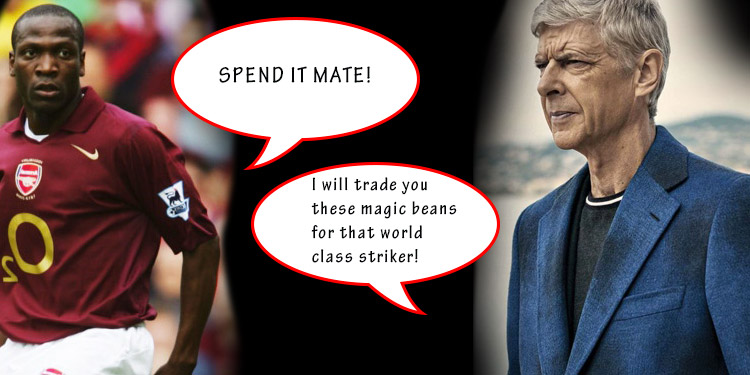 Good morning to you, let’s have a quick Saturday round-up. Our game isn’t until tomorrow, so we can wait until then to preview it.

With the European Championships taking place this summer, as well as a Copa America, Arsene Wenger wants to ensure his team avoids a Champions League qualifier by finishing in at least third position. Speaking yesterday, he said:

Top four is not Champions League, top three, yes. That’s why it is important. What has changed over the years is that the impact of the finances in the Champions League is not as big any more. For a period in the past the money was vital.

But the sporting impact, the planning of the next season, of course it changes completely, especially when you have a big summer tournament like the Euros which is now like a World Cup. When you have to play Champions League qualifiers the European Championship is still going on.

All common sense, of course, and it goes without saying that there would have been a much nicer way to avoid having to deal with this kind of scenario. What will be interesting, however, is what kind of squad building we do this summer, and how that impacts the early part of the season.

Take Alexis Sanchez as an example. If one of the big mistakes of last summer was not buying enough players, so too was not giving him the rest he needed after a long season and going the distance in a summer tournament as Chile won the Copa America. Such was our dependence on him as a player that we threw him on in the first game of the season, and it’s clear that fatigue played a significant part in his loss of form, as well as eventually seeing him succumb to injury.

Only now are we seeing him approaching his best, and given that it’s mid-April and the league is not winnable, that’s rather too late. We’ll have plenty of players on international duty this summer, and you’d have to think that some of the players we have our eyes on will also be playing throughout the summer, so how does than affect the beginning of our new domestic campaign?

You’d like to think we’ll have learned a lesson. That the demands on players are almost relentless these days and expecting them to play to their optimum level when they’re absolutely knackered is both foolish and damaging – to them and to the team. Prepare properly, and build a squad which has the quality to cope. Even ‘struggling’ through a few weeks at the start of the season is far preferable to slumping for three months in the middle of a title challenge.

We can bemoan the impact of internationals all we like, but it’s not as if they’re a surprise. We know they’re happening, and when, so it’s up to us to deal with that, like every other team has to.

In terms of the summer, what we need to do seems obvious. Add quality, replace the squad players who are leaving with good players too, and bring in that bit extra. Speaking about what might happen, and referencing links to N’Gola Kante and Riyad Mahrez, Thierry Henry says Arsene Wenger needs to go big:

It’s going to be a very busy summer for Arsene because you need to get that excitement back and the fans to look forward to something for next season.

While Lauren, he of Neville throttling and perpetrator of one of my favourite tackles ever, says adding some more physicality to the team will be key:

We need to have a combination of players who are good with the ball, intelligent and quality with players who have a physical presence in some parts of the field – especially at centre-back and in the middle of the park. We need to make those sort of signings. It would help the team to achieve what they are looking for. If they put that together with the other factors, then the team will improve.

Big fan of a guy who left the club in 2006 and who isn’t involved in any coaching or anything using ‘we’. Of course, it’s easy to say the right things about transfers, but there’s no question that this is a summer in which Arsene Wenger is going to be judged more closely than ever before in terms of what he does.

For some there’s little he can do to win back their favour. Others lack belief that he’ll do what’s necessary to make his team contenders again. But if, and I know it’s a big if, we had a storming summer in the transfer market, it would at least provide some hope that next season’s journey will be different in some way. We might find a few path or something.

Unless something goes terribly wrong between now and the end of the season, he is going to be the man in charge next year, so a summer when we spend like Croesus is what it comes down to. That’s still some time away though.

Briefly, Hector Bellerin made the PFA Team of the Season, and Mesut Ozil didn’t to the surprise of the manager. And whatever way you are about the manager, Wenger in, Wenger out, or Wenger Shake It All About, this is nicely done by the Arsenal Gent.

Don’t forget this week’s Arsecast which includes discussion of the manager and everything that’s going on with Philippe Auclair, and some post-West Brom stuff too. Download or stream on site, get it on Acast, or via iTunes where you can subscribe as ever.

Finally, if you’re in the UK and fancy winning a car, Citroen are doing a competition in which you can do just that by predicting Arsenal results. You can sign up here using your Facebook account, predict some results, and you could win a brand new C4 Cactus.

Pretty easy. Again, it is only open to UK residents, and good luck if you decide to enter.

Till tomorrow, have a good Saturday.