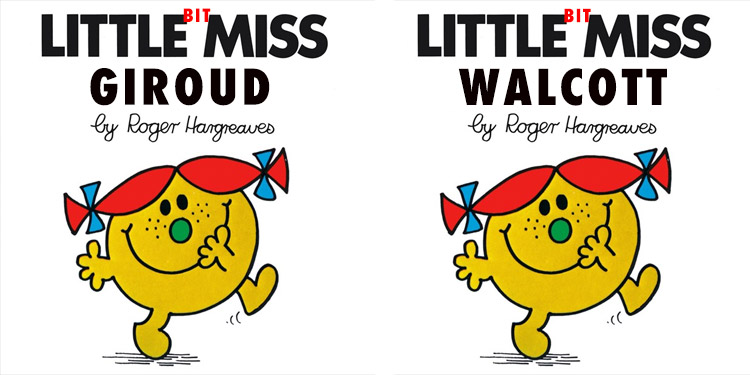 Well, I didn’t bother turning on Monday night football last night because I figured a Sp*rs side that were actually playing well against West Brom side that, on Thursday night against us looked like they couldn’t care less, would only end one way.

I was not inclined to watch such a thing so I watched the new episode of Game of Thrones. Spoiler alert: there were boobs and some people got killed in hideous ways. At one of the ad breaks I noticed it was 1-0 to Sp*rs and I thought ‘Oh here we go’, so I watched more killing and boobs, and when it had finished I played a game of FIFA online.

There are very many weird people on the Internet, but this particular chap was very strange because he had a mic or headset and I could hear him racially abusing all the Arsenal players as the game went on, regardless of their ethnicity. I don’t need to go into details but it was really odd. I also did not realise that all of our players were gay, both with each other and with random people they met in the street. The things you learn, eh?

I did consider quitting because it was quite unpleasant to listen to but then I thought the best way to annoy him would be to beat him. So Santi Cazorla scored from a corner and after that I did that really annoying thing where you pass the ball around the back for ages and they can’t get near it, and sometimes when the keeper has it you do keepy-ups. This did nothing for his mood, it must be said, but it all worked out in the end and a 1-0 victory kept me in Division 7 (I am shit).

By the time that game finished West Brom had equalised, and there were 15 minutes left. I didn’t want to play another game in case I encountered another vile racist homophobe, so I played the skill game where you try and score as many goals as possible. This was mostly done with Alexis and Olivier Giroud and if the Frenchman wants to give me a shout at any point today, I’ve found his shooting boots. Unfortunately for him they’re trapped inside my PS4 in Dublin. Still, at least we know where they are.

Eventually the final whistle went – in real life – and Sp*rs could only draw against West Brom. I mean, even we beat them. Blimey. And what it means is that Leicester just need one win from their final three league games to win the Premier League.

It really is pretty amazing. It reflects badly on us, of course, but then it also reflects badly on all the established sides who, if you’d told them all they had to do to win the title this season was finish ahead of Leicester, would all have bitten your hand off for that chance. But mostly it reflects badly on us because we were the ones best placed to take advantage of their poor seasons.

Still, it also makes the nightmarish scenario of Sp*rs winning the league less likely. I have some Sp*rs friends, but they’ll understand the partisanship. It would have been just unthinkable for that to happen. As it is, they can reflect on that famous Jay Z song: ‘I’ve got 1961 problems but the Premier League title ain’t one’. I think that’s how it goes.

Away from all that top of the table madness, there were some interesting stats yesterday regarding Mesut Ozil. Having created 5 chances in the Sunderland game, it brought his total of chances created in the season to 137, a new record, eclipsing the old one held by Frank Lampard in 2008-09.

He’s currently on 18 Premier League assists, but 16 of those came between August and December. Since the turn of the year just 2 of the 57 chances he’s made have been finished by teammates:

In the first half of the season, for every five chances Ozil created one was converted, a rate that, had it been maintained in 2016, would have earned Ozil 27 assists.

Which would also have given Arsenal 9 more goals and spread over the various games, who knows what impact that might have had on our season. It’s hard not to draw a correlation between that 2016 dwindle and the striking slump endured by Olivier Giroud and Theo Walcott.

By January 13th Giroud had 18 goals in all competitions, and he was well on his way to his best ever goal haul by a long distance. Here we are on April 26th and he’s added just 2 goals to that tally, neither of them in the Premier League. He’s scored in just 1 of his last 20 appearances.

Similarly, Theo Walcott, ahead of Giroud in the striking pecking order at the start of the season, has managed just score in just 4 of his last 30 appearances. We’ve had the return of Danny Welbeck and Alexis Sanchez rediscovering some form to offset that slightly, but for all the gripes about midfield and the defence, it’s clear that spurning goalscoring opportunities is what really put a spoke in the wheel of our title challenge.

By the way, I’m not pointing the finger of blame at those players in particular – I think there’s a collective responsibility and when the team plays poorly in general individuals suffer, but if we don’t have a great big long list of potential striking targets already made up for this summer, then we’re quite mad. Or Arsenal. One or the other. Or both, actually.

Finally, if you haven’t had a chance to listen to this week’s Arsecast Extra James and I discuss Sunderland, whether the manager has ‘lost the dressing room’, Giroud, Walcott, and other stuff like bread, transport tubes and invisible evil flightless birds that could kill us all.

Listen or download on site here, subscribe in iTunes, and listen via Acast. Thanks as ever for doing so and for all the questions and feedback you provide. It’s greatly appreciated.

That’s yer lot for this morning, till tomorrow.