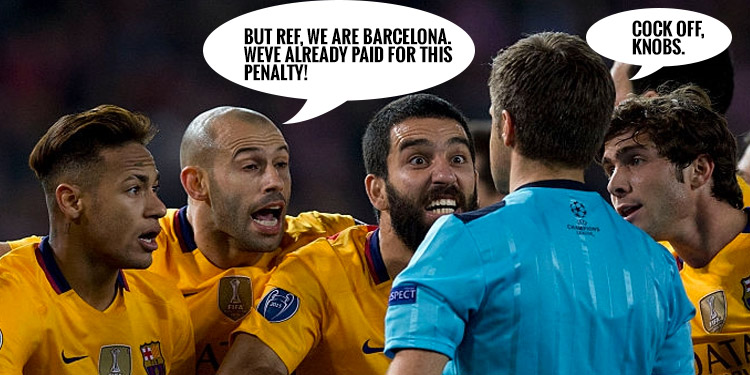 I walked a lot yesterday. If you were in Dublin you’d have seen me because I walked everywhere. Here and there, hither and thither, I was all over town like a hot rash.

All the walking meant I only got home for the second half of Atlético Madrid v Barcelona in the Champions League. Firstly, can someone please tell professional commentators who are paid actual money to speak on the telly that there’s no H. It’s not ATHletico. But then people who say the word ‘pelanty’ get jobs, and Michael Owen – purveyor of wisdom that will live through the ages – hasn’t yet been chucked out of a helicopter circling Dubai (on that, by the way, you should definitely read this).

So, I missed the goal by Antoine ‘Can we sign him please?’ Griezmann in the first half. Still, I had a whole second half to look forward to, and I have to say I enjoyed it a lot. Barcelona huffed and they puffed but they could not blow the Atlético house down. Some will say it’s because they’ve gone off the boil, and their recent form has definitely been poor by their standards, but mostly it was down to fantastic defending from the home side.

They were organised, disciplined, and they worked so, so hard. The speed at which they closed the Barcelona players down was something else. The numbers show 22 tackles, 16 of which were in their own half; 21 interceptions; 6 blocks; 23 clearances; 2 blocked crosses; 16 headed clearances; and they completed just 122 of 200 attempted passes (61% success rate).

Barcelona had 13 attempts on goal, but just 4 on target, and made 595 passes. Atlético defended deeply, because they had to, but also because they knew they could. And for me there’s as much to like about a team who can defend properly as there is about a team that can attack in a swashbuckling style.

Every team at every level has the players who can do the tricks and have the pace and who can score the goals, but watching Simeone’s team defend so well was hugely enjoyable. A not simply because it frustrated Barcelona, but because it’s a testament to hard work, organisation and the quality of the defenders and the team that backed them up.

So, Barcelona are frustrated, and late on Andres Iniesta handles the ball in his own area. It was practically a save, and certainly a red card, but of course we can’t have that. Red cards are saved for the opposition, but the referee gave the penalty. Antoine ‘Can we sign him please? We’ll give you Walcott, he’s really good, honest!’ Griezmann stepped up to put Atlético 2-0 up on the night.

Then, at the other end, Barcelona should have had a penalty themselves for a handball which was clearly inside the area. The referee gave a free kick outside the box, much to their consternation. I particularly liked the bit where Iniesta, who shouldn’t have been on the pitch, remonstrated with the referee, but Messi took it, it went wide and Atlético went through.

Having been on the receiving end of one of the most ludicrous refereeing decisions in Champions League history – when van Persie was sent off at the Camp Nou for taking a shot a millisecond after the whistle went – it’s impossible not to love the sweet, sweet injustice of that late penalty decision. It felt almost decadent. Like I was a Roman emperor being fed delicious grapes of inequity, washed down with a goblet of wine made from their tears, which were plentiful and many.

I feel like a kid who has just seen a great movie. You know when you come out and ask your pals ‘What was your favourite bit?’. Well my other favourite bit, apart from the baddie losing in the end, was when Diego Godin came striding out of defence with the ball late on, before losing it around the centre-circle, chasing after the bloke with the ball and making the most perfect yellow card foul you’ll ever see before before striding back into defence, all in one movement. Superbly cynical. Perhaps too cynical for some who prefer football to be pure and magical, but you really can’t beat a nice bit of good old fashioned cuntery, especially when you’re not on the other end of it.

So, Barcelona go out, Atlético go through and it’s Man City, Real Madrid and Bayern Munich for the semi-finals. I’m all in on Simeone’s team now. A choice which will probably doom them to profound, crushing disappointment, but you never know!

From an Arsenal point of view, Mesut Ozil has been nominated for the PFA Players Players Players Players Player of the Year Award by Players for Players and by Players. He’s in there with Jamie Vardy, Riyad Mahrez, N’Golo Kante, Dmitri Payet and Harry Kane. Pretty sure that one of the Leicester lot will win it because FAIRYTALE and shit, but basically individual awards in football are nonsense, so I don’t suppose it matters one way or the other who does. We know how good Ozil has been.

We should get some team news today ahead of the Crystal Palace game on Sunday. The quietness of this week to be replaced by some actual news and what have you. We’ll cover all that on Arseblog News throughout the day.

I’m back tomorrow with an Arsecast, and all the rest. Until then, try not to laugh too hard at our Catalan chums.