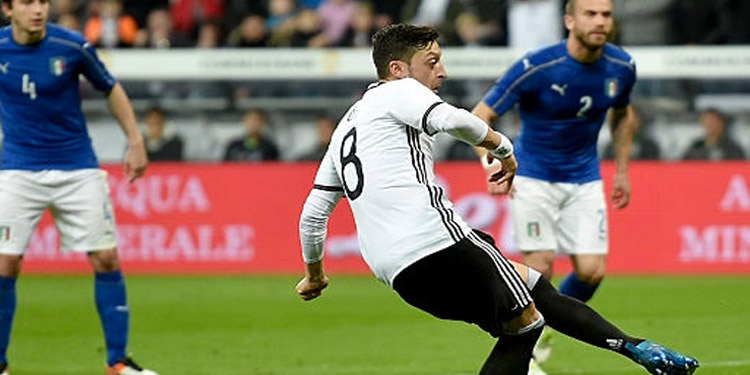 I have been looking around this morning and as yet I’ve found no reports of any of our players suffering aches, strain, niggles, whacks, or cracks while on international duty.

I’m not saying this information is definitive so don’t come rushing at me with your pitchforks and flaming flamers if it turns out somebody has returned to London completely banjaxed. I’ve had a look around though, and this is what the Arsenal players did.

Mesut Ozil: Scored a penalty against Italy as Germany ran out 4-1 winners. It’s the first penalty he’s scored since the last one he successfully took. You might remember he took one against Bayern Munich but missed it, and then I think Szczesny got sent off when Arjen Robben did a dive and they went on to win the game.

It’s good to see him score one again, because let’s face it, penalties are pretty easy all things considered. You’re a professional footballer, it’s 12 yards, the keeper is just guessing and you should be able to score them 99 times out of 100. Pressure? Pah.

Alexis Sanchez: He got an assist as Chile beat Paraguay 4-1. His goalscoring form is clearly not what it was, but he has been racking up some assists lately. He got one against Barcelona, a lovely one against Everton, and that one last night.

Hopefully he can find his range in front of goal in these final eight games of the season.

Theo Walcott: He came on during England’s 2-1 defeat to the Netherlands. The BBC says he showed the ‘Odd flash of pace and one rising shot over the bar but otherwise quiet’.

Danny Welbeck: Did not play. Nice and fresh for the weekend now provided his knee is still in one piece and the ice-pack the other day was a mere precaution.

David Ospina: He played as Colombia beat Ecuador 3-1. Someone on Twitter said to me “Ospina with another knock. Shocking.”

I have sought evidence of this knock but found none. I searched Twitter and saw a lot of people doing love heart emoticons over some interview he did, but I haven’t had the time to watch it. Anyway, it seems like he got through the 90 minutes, and didn’t drop a bottle of aftershave on his foot in the dressing room afterwards, always a good thing for a goalkeeper.

Joel Campbell: Did some skill as Costa Rica beat Jamaica 2-0. Will return to watch Alex Iwobi get picked ahead of him. Probably.

Alex Iwobi: Came on as a sub, and completesportsnigeria said this, “Brought some life into the Super Eagles attack when he replaced Aminu Umar in the 72 minute.”

Perhaps a bright spark for Nigeria as defeat to Egypt means they won’t qualify for the 2017 African Cup of Nations. That’s good for Arsenal, but not good for Nigeria. I know there are a lot of Arsenal fans in Nigeria too, so bad luck chaps.

Mohamed Elneny: As far as I can tell he played the full 90 as Egypt beat Nigeria. That means they do qualify for the 2017 AFCON, and that’s something that needs to be part of our summer thinking. We know that midfield is an area that has to be addressed anyway. With Mikel Arteta, Tomas Rosicky and Mathieu Flamini all set to leave, and Jack Wilshere as reliable as a 1970s Skoda, we have to add depth and quality in that area of the squad.

Elneny has been impressive lately, but a 6-8 week absence next January is something that we’ll have to reckon with. And we can’t say it’s something that took us by surprise. Planning please.

Olivier Giroud: Came on with 11 minutes left in France’s 4-2 win over Russia. I have no other information but I’m guessing that:

Laurent Koscielny: Did not play. I don’t know if this was tactical or if he’s in the early stages of consumption brought on by suffering a massive dropsy. Hopefully just the former.

So, as far as I can tell that’s everyone. The rest of them have been training at London Colney during the week, but mostly recharging those batteries. Hopefully the international exertions of the Leicester and Sp*rs players will have knackered them sufficiently to collapse completely while we go on a winning streak that … nah … I can’t do it to myself.

Anyway, all’s well that ends well. It’s been a long old Interlull this one, and I’m looking forward to the return of the Arsenal this weekend. Sort of.

Just a quickie for you finally, if you’re in the UK and fancy winning a car, Citroen are doing a competition in which you can do just that by predicting Arsenal results. You can sign up here using your Facebook account, predict some results, and you could win a brand new C4 Cactus.

Pretty easy. Again, it is only open to UK residents, and good luck if you decide to enter.