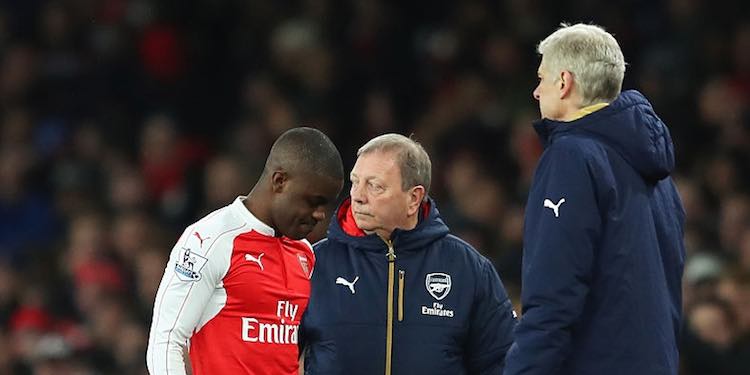 I really don’t even know where to start this morning. If Sunday was the catalyst for an outburst of anger, last night was … I don’t know … I don’t know what the hell that was. You remember the scene from The Simpsons where they’re at Krusty Burger, and there’s the ‘Hamburglar’ character?

Having started the game brightly, and gone ahead through a very smart Joel Campbell goal in the 15th minute, it was all set up for Arsenal to take control of the game. That finish, wonderfully improvised on the slide, should have sparked this side into life against opposition struggling against relegation, who had made 6 changes to their team (3 of them in the back four), and whose head coach was taken to hospital on the day of the game.

Instead we let them back into it. Yes, it was a foul on Ozil. Yes, I’m a bit tired of us not being awarded what appear to be blatant fouls. But we switched off. Basic. Fundamental. Lack of focus and concentration. Routledge ran off Bellerin, behind Mertesacker, and scored his first goal in a year. A YEAR.

Before half-time a fantastic Ramsey ball allowed Mertesacker to nod the ball perfectly into the path of Olivier Giroud. With just the keeper to beat he smashed at the ball with his right foot and saw it cannon back off the bar. Unlucky, as Arsene Wenger suggested afterwards? No, far from it. Bad finishing, simple as that. From that position, you have to score, and when you don’t the chances are it will prove costly.

There were chances in the second half too. Alexis firing just wide; Alexis failing to make contact with a brilliant Ozil delivery just yards from goal again and with just the keeper to beat; and Arsene Wenger felt that the team needed something new to get the goal.

So, he took off Joel Campbell, unquestionably our best and most effective player on the night and put on Danny Welbeck. The reaction to that change was vociferous to say the least. Anyone with eyes could see he’d been our outstanding performer on the night, while Alexis, much as I love him, continued his struggles. It was a decision based on seniority, rather than merit. It was, by any standards, a bad decision, one steeped in caution rather than valour and that, I think, transmitted itself to the team.

Almost immediately Sigurdsson had a chance to put them ahead. Ghosting away from Gabriel with a bog-standard give and go, he rounded Cech and somehow missed the target from a tight angle. The frustration with the team, and that substitution, was palpable. Alexis was unlucky with a free kick that took the slightest touch off the wall and hit the bar, but careless when he made a poor pass in midfield which Swansea intercepted and then kept the ball alive.

Heads went down. The response was slightly better than the final 26 minutes at Old Trafford, with four attempts on goal, two on target, but none of them that required anything other than basic goalkeeping from Lukasz Fabianski. Those players wilted. They didn’t have it in themselves to respond in any significant way.

And as poor as Alexis was, when you haul him off and put Theo Walcott on, you’re basically saying ‘Stick a fork in us, we’re done.’ A player with all the mental fortitude of a shoe is not the man to drag a team up from depths of despair, and make no mistake, that’s what we saw last night. A group of players who more or less accepted defeat when that Swansea goal went in.

We’ve had situations like this in the past, and whether we’ve got a goal or goals back or not, at the very least the final stages of the game have been something of an onslaught. How many times did we hear ‘Why couldn’t they play the whole game like they did in the last 10-15 minutes?’. We didn’t see anything like that. That there was no response, nothing other than a resigned, go-through-the-motions reaction to being behind to team scrapping its way out of the relegation zone.

Whatever about character and desire, the bottom line is that this is a team without the footballing ability to be champions.

To clarify: we have good players, but a manager unable to get the best out of them.

And yes, I know we can do better in terms of certain players in certain positions, but this is the same group plus a better goalkeeper that played so well in the second half of last season. They’re capable of better, and it got me thinking: when was the last time we actually played well?

I don’t mean functionally, like a 2-0 win over Bournemouth or Aston Villa, or an FA Cup win over a second string side. But actually performed well over 90 minutes. There was the fantastic Champions League win over Olmypiacos in December, and before that maybe you’re looking at Swansea in October (three second half goals), or United back in September.

That’s three games from our last 29. We don’t have any form to speak of. There’s clearly no confidence or belief. There’s no rhythm. Tactically we seem all over the place. Basically speaking, there’s a group of players, but not much of a team. And you can call for this player to go and that player to go all you like, but it’s on the manager.

They’re his players, it’s his team, his system – whatever the hell it might be – and his inability to find any way to make them function. Sure, we miss chances, and I’ve spoken long about the need for greater efficiency in front of goal, but it’s now a rare thing, if it happens at all, that we actually control a game of football.

We buzz around, firefighting here and there, playing reactive football without any real idea what we’re supposed to do. Last night, Swansea pressed quite high knowing that stops us building any rhythm, but it’s not the first time teams have done that to us and still we don’t have any kind of solution. It’s not up the players to find that solution, by the way, it’s Arsene Wenger and his coaching staff who are responsible.

We didn’t even play *that* badly last night. On the balance of the game you’d say it was one we should have won, but that we didn’t speaks sadly to the ability of this team to play the kind of football that wins titles. It was a loss made more painful by the fact Sp*rs lost against West Ham, another chance to make a statement, or a step in the right direction, and we blew it.

I made my thoughts clear on the manager on Monday’s blog. Nothing that happened last night has changed my mind in any way. The miracle required is even less likely now. It’d be like walking on water, turning water into wine, lashing out the loaves and fishes, and healing a leper all at the same time as bringing about world peace and making pineapple on pizza acceptable.

It feels like a rot has set in, and it’s fairly numbing. The news that Petr Cech, who did his hamstring chasing back from a corner he was forced to up for because we’re so bad, and Laurent Koscielny will both miss the derby on Saturday compounded what was a truly miserable night.

The curtain has been pulled back, the Wizard exposed. Quite what we do to prepare ourselves for Saturday is anybody’s guess, and it’s hard not to fear the worst.  I can’t do much more than that this morning, but I’ll be back tomorrow with an Arsecast, and all the rest.