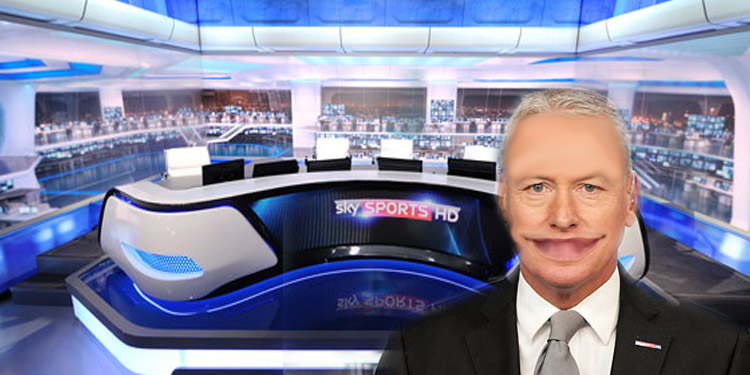 I was sitting here wondering what to write about this morning, somewhat disturbed after a dream in which I had my a right-arm sawn off by a Deadwood style doctor who gave me only cheap whiskey as an anaesthetic, I got to thinking about transfer deadline day (yesterday was deathly quiet, nothing happened at all).

It’s coming up soon, that thing which Sky, and now BT, would have us believe is a day of national importance. It’s not, of course, but I suspect won’t be long before you can get transfer deadline day greetings cards in your local newsagents.

Jim White, with his newly collagen lips, shiny Botox forehead and Kardashian arse-implants will go full Hollywood, bellowing about some player moving from some club to another as we continue to glorify the trading of human beings as commodities. And when you consider the influence that the television companies have over the game now, how long before they decide they’ve taken this element of it as far as they can and decide to change things around to suit themselves.

For the purposes of this piece, always assume Jim White is SHOUTING like a MAD INTERNET PERSON.

Jim White: “We know that Manchester United are trying to get a deal done for veteran midfielder Jack Wilshere, who has just returned from injury. That poleaxed scrotum he suffered against Aldershot in the Dr Oetker European Premier League left the England international out of action for 11 months

“His club, AlbinoLeffe have been Snapchat Serie A Champions for the last 4 years after this tiny Italian club was bought by Galway, who seceded from the Irish Republic of Ireland and bits of Northern Ireland but not all of it, when they Fracked the absolute shite out of Connemara and discovered more natural gas than on the rest of the planet put together.

“BUT, and this is the big but, will the viewers allow the deal to go through? United boss Ryan Giggs has been in the Transfer Deadline Day Big Brother House for three weeks now, but did he manage to complete that all important task?

“Let’s go over to it doesn’t matter what her name is but she looks good, and SHE’S LIVE #ripmartintyler” (people speaking in hashtags is now #super #common).

It doesn’t matter what her name is but she looks good: “Thanks Jim, it looks like it’s bad news for Man United fans as they look to boost their squad before the window closes.

“Ryan Giggs was tasked with the job of wanking off this wolverine into a cup and making an omelette from it, but so far he’s had little success, and is bleeding heavily from a number of deep lacerations to his neck and forearms. He appears to be somewhat disorientated and on the verge of passing out.”

Jim White: “PERFECT. Now is the time to offer the forfeit. The rules of transfer deadline say that if he sacrifices a digit he can leave the wolverine. For a bonus point, he has to Frenchie the exhumed body of legendary United manager Sir Matt Busby.”

It doesn’t matter what her name is but she looks good: “Ryan, it’s up to you now. You can continue with the wolverine, or take the forfeit.”

It doesn’t matter what her name is but she looks good: “You have 30 seconds to decide. Keep trying with the wild animal; forfeit, or forfeit and bonus … and you can possibly sign Jack Wilshere. What’s it to be. Ew, some of his blood spurted on me …”

Jim White: “Hahaha, that’s the way it goes it doesn’t matter what your name is but you look good. This is what people love about transfer deadline day.”

Jim White: “So there you go folks, what a great sport Ryan Giggs is. We’ve seen Chopper Joey Barton hack off his little finger, and the United manger defile a body, so now it’s up to you. Has he done enough for this transfer to go through?

“Use the red button to vote now. If you think he should be allowed sign Wilshere click YES; if you think the signing shouldn’t happen, and Ryan Giggs punishment for failing his club is to be force-fed food like a foie-gras goose in our Gavage Garage, before having to lose all that weight and then made star in a reality show which sees him marry a member of newly reformed boy-band One Direction called ‘My Big Fat Giggsy Wedding’, click NO.

“Ooooh, and it looks like the NOs are running away with it already.”

It doesn’t matter what her name is but she looks good: “Er, Jim … I think he might be dead …”

Jim White: “Super! We’re going to take a break but when we return, we have big news for Arsenal fans … haha, no we don’t, because as you know manager Arsene Wenger refuses to take part in the fun and games, meaning the Gunners haven’t signed a single player for 7 years now.

Producer: Feed him! Feed him now or he’ll devour us all!