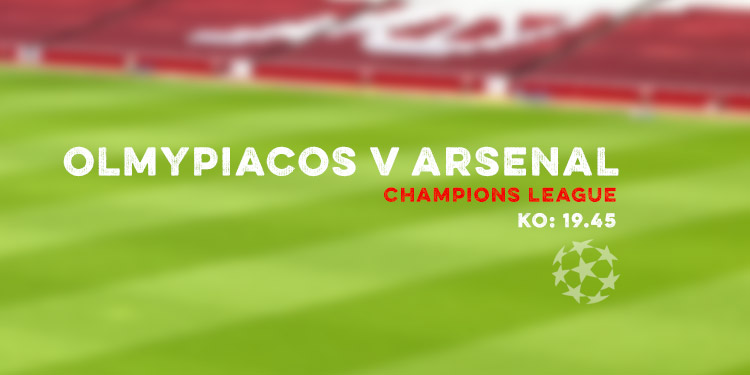 How to sum up tonight? Do or die. Make or break. Hit or miss. Deal or no deal. Maybe not that last one, but the game has an obvious effect on the rest of our season.

We know we’re going to be in Europe one way or another, it’s whether or not we’re feasting at the top table with all the big boys, or forced into the awkward buffet that is the Europa League with its overly shiny ham and coleslaw that’s got a bit of a crust on it because it’s been sitting out in the open for so long (but the stuff underneath is generally ok).

The task is simple: because the teams are separated firstly by the head to head results in the group stages, we have to win by any other scoreline than 1-0 or 2-1. 1-0 leaves it 3-3 on aggregate, and 2-1 at 4-4, with away goals seeing the Greeks through. A 3-2 Arsenal win means the teams are level on a head to head basis, but UEFA say that’s ‘good enough for Arsenal to go through on overall goal difference.’

So there you have it. We have to win and we have to win by a specific scoreline. We were actually in this situation last season against Monaco, if you remember. Having made a pig’s mickey of the first leg of the first knock-out round, I think we had to score three goals at their place, in typical Arsenal fashion we won 2-0 and went out.

Tonight’s task is made more difficult because this is a squad beset by injuries, as we know. We’ve lost our most explosive, dynamic goalscorer; our first-choice central midfield partnership are out of action for the next few months; and there’s been little depth on the bench – certainly from an attacking point of view – for much of the season.

For me the only question about tonight’s team is whether or not Theo Walcott starts. I’m really not sure what Arsene Wenger is going to do here. He is just back from an injury, and while the obvious way to do it is to play him ahead of Alex Oxlade-Chamberlain who struggled against Sunderland at the weekend, the manager has been pretty reluctant to start him on the right hand side for some time now. He hasn’t trusted him from a defensive point of view since Sp*rs away last February and in a game we’d be best advised to try and keep a clean sheet in, it’s hard to see that changing.

Would he then play him up front ahead of Olivier Giroud? The Frenchman scored at the weekend, but maybe if you were looking for a player to make an impact off the bench – assuming you were in a situation where you needed that – he’s the one who has shown most often that he can do that. He’s scored a number of times this season having entered the fray in the second half, and given that our only attacking options otherwise are youngsters (Iwobi and possibly The Jeff), or the struggling Ox, then he might consider that.

I guess it depends on what he views the best way to approach this. Talk of going for it from the start is all well and good, but we don’t want to get caught out early, as we nearly did against Sunderland on Saturday, thus making our task even more difficult. The need to score goals has got to be balanced with an improvement on the defensive performance we saw in our last game.

The manager spoke about the ‘fear factor’ that might be in the back of the Olympiacos minds, saying:

Let’s not forget Olympiacos are qualified at the moment but they can lose what they have. That can create a fear factor. We have a history of positive results, we have won everywhere in Europe and we know we can do it. We just want to focus on a top quality performance.

Certainly an early goal would add to that and may well inhibit the way they play a bit, but we have to assume that they’re going to be looking at this as nothing more than a great chance to qualify for the knock-out rounds. If we can make them nervous by playing well, so be it, but we can’t bank on that in any way.

Again much will come down to key men like Mesut Ozil and Aaron Ramsey. The pair created two last weekend and Ramsey got one himself, so there’s plenty of attacking potential there. The question is whether we’ve done enough to tighten things up when we don’t have the ball, and particularly straight after possession is turned over. That’s where Sunderland were most dangerous, and I suspect tonight’s opposition have more quality and are more likely to hurt us if we don’t pay attention.

It feels like a big task, and a 2-0 win is hardly beyond the realms of possibility, but I think we’ll have to score more than that. We’ve only kept 2 clean sheets in our last 10 games, so if we get through this one without conceding I’ll be pleasantly surprised. It’s down to the men up top to make the difference I think.

Fingers crossed we can avoid the ham with the rainbow sheen.

Elsewhere, Mathieu Debuchy has spoken once more about his willingness to leave the club in order to find first team football so he can keep his Euro 2016 hopes alive – here’s a full transcript of his interview with RMC radio.

While on the one hand I understand his frustration, having lost his place to Hector Bellerin, I can’t say I’m overly impressed with him mouthing off all the time instead of keeping his counsel, working hard and trying to win back his place. When he has played, he’s been decidedly poor for the most part. Some of that might be down to the fact he’s not playing regularly, but when his default option seems to be to moan to the press about the fact he’s not playing, you have to wonder about his application and determination.

I think we can all understand the fact he wants to play at Euro 2016 in France next summer, and he has been unfortunate with injury, but he’s long enough in the game to know that’s the way football goes. Making his grievances public, not for the first time, will do little to change his manager’s mind, and it also creates something of a problem.

It is one of the issues of having depth, an experienced international isn’t going to like it when he’s kept out of the team by a 20 year old, but that depth is also necessary. To my mind there’s no way Arsenal can allow him to leave in January just because it suits him or because he’s prioritising a summer tournament for his country. We need cover for Bellerin, and he could well find himself given a chance if the young Spaniard gets injured. If he doesn’t, suck it up, you’ve been unlucky, but that’s football.

Remember, if time zones or other things get in your way of watching today’s match, we’ve got you covered with our live blog. More details later, or bookmark our default live blog page.