I promised myself I wouldn’t do this. Munich away. I have been three times before, twice very recently, and spiralling ticket prices mean I have to (try to) be a bit more selective with European away trips nowadays. Whenever I return from away defeats, friends and colleagues always greet me with, “I bet you wish you hadn’t bothered,” but nothing could be further from the truth. When Arsenal lose a European away match I haven’t travelled to, I very much wish I had been there. Not being there makes me feel useless and detached, like a discarded appendix.

Of course I’m not daft enough to think that my presence carries the slightest impact on the game, but against my better judgement I indulge the feeling that I wasn’t there for the team during a dark hour. I imagine it’s a similar sensation that a father feels when he misses a child’s piano recital, that fierce pang of guilt that almost manifests itself physically, that gnaws at the nape of your neck and makes your skull feel hot with remorse. This is all fantastically stupid and immature of course, but then logic, rationality and fandom are incompatible bed fellows.

I was unable to make the trip to Zagreb and watching it in the pub was an uncomfortable experience. I reneged on my pact to give Munich a wide berth and booked flights the morning after that torrid defeat in Croatia. I was certain that we would lose again in Germany and my separation anxiety got the better of me. Having seen the city many times by now and in an attempt to save cost, Terry and I decided upon the nuclear travel option. Fly into Munich early on the morning of the game, fly back early the morning after, no accommodation, no sleep for close to 48 hours.

So my alarm sounds at 1am on Wednesday morning and I wearily drag myself to my feet and get dressed, knowing that, for the next two days, I will only sleep in snatches, head pressed against the windows of planes and buses. Travelling sans luggage proves to be an odd sensation, especially as my weariness grows during the trip. I constantly fret at having left a phantom bag at an airport or bus station, only to catch my thoughts before they can tumble into a full blown panic. I write this on Thursday afternoon having not been horizontal for close to 40 hours.

Having negotiated two night buses and a coach to Stansted airport before sunrise, Terry and I decide that, since time is going to be something of an abstract concept for us for the next two days, a 5am airport beer is in order. I team my two breakfast pints of lager with a fry up and regret it less than an hour later. I won’t have access to a toothbrush for a day and a half and already there’s a party in my mouth and everyone is invited but nobody is cleaning up after themselves. I take the opportunity for a turbo nap on the plane and then again for our coach transfer into Munich city centre.

It’s close to midday by the time we arrive to meet with the troops that had arrived the evening previous. The unseasonable November warmth is illustrated by the endless array of wasps that waft fecklessly into view at regular intervals. This being Germany and all, pretzels the size of car steering wheels are strewn across the table, whilst pork products are ordered and devoured. By now, the steady flow of delicious pilsner and the injection of protein has cured me of my weariness. Strikingly, there is almost no talk of the actual game for the whole afternoon. 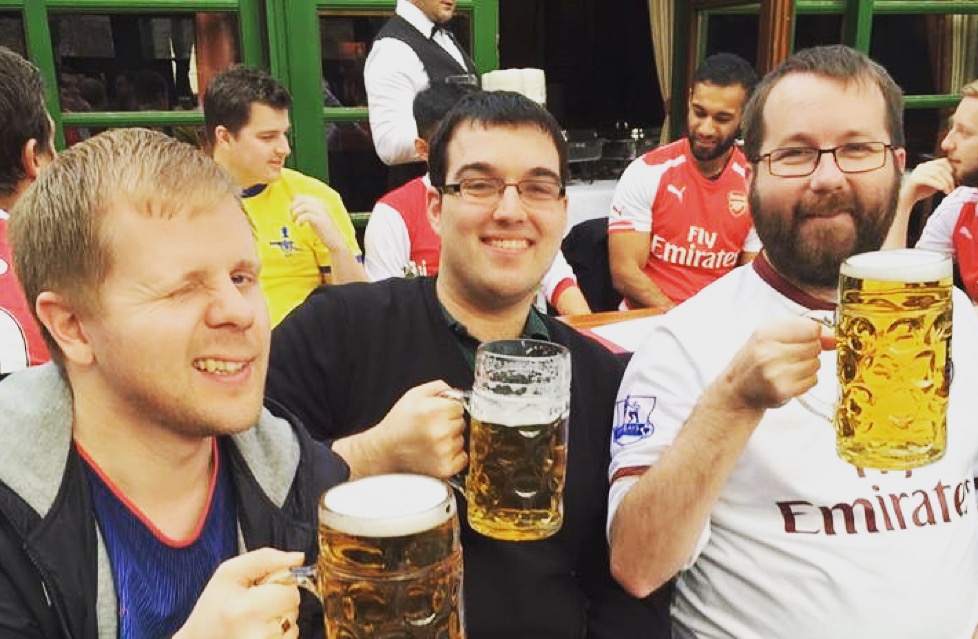 Whether this is out of resignation, I am not entirely sure. Having beaten Bayern in North London, I personally regarded this game as “house money.” I was certain that Munich would have too much for Arsenal at home, especially a Munich team stung by defeat a fortnight ago and, ergo, in need of the points to practically confirm themselves as group winners. Arsenal’s starting line-up really picked itself, with much of the squad bound in malady. The group is taking shape and the ramifications are pretty clear for the Gunners. I guess there really weren’t many talking points to that begged oratory investigation.

A few more steins were sunk as day gave way to dusk, before negotiating the rambunctious metro journey to the stadium. It was clear that our heaving carriage of Gooners were “well refreshed” and in good voice, leaving smirking locals to look on in bemusement as songs were sung and the carriage ceiling was thumped percussively in time by a cadre of young Arsenal fans. That fevered noise never really found its way into the away end once inside the stadium, however. For a start, the away enclosure is in the third tier and it’s quite difficult to make yourself heard. 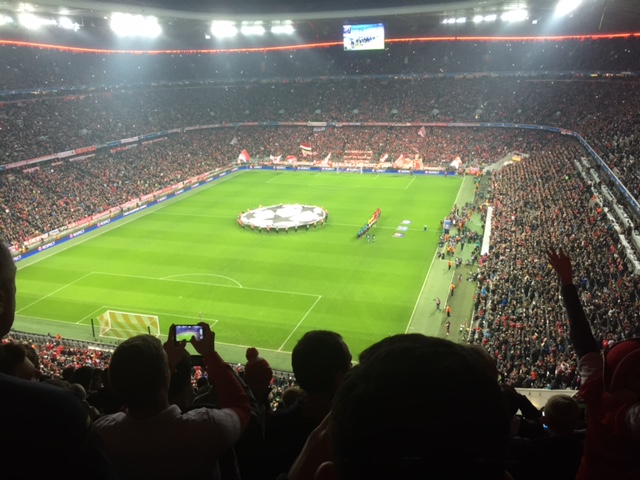 The away end sprawls around the corner of the North stand, past the corner flag and bleeds into the east stand, so the travelling support feels disparate. The approach to the stadium from the metro station is eye catching, yet exhausting. The ground sits like a humungous lava lamp next to a busy dual carriage way. There is little but gravel and the hum of traffic next to this luminous, amorphous blob of an arena. Hordes of people lurch towards it like the Children of the Corn, irretrievably hypnotised and drawn towards the bright red light bulb. It certainly felt like Arsenal were batting their heads against the stadium walls for much of the 90 minutes. 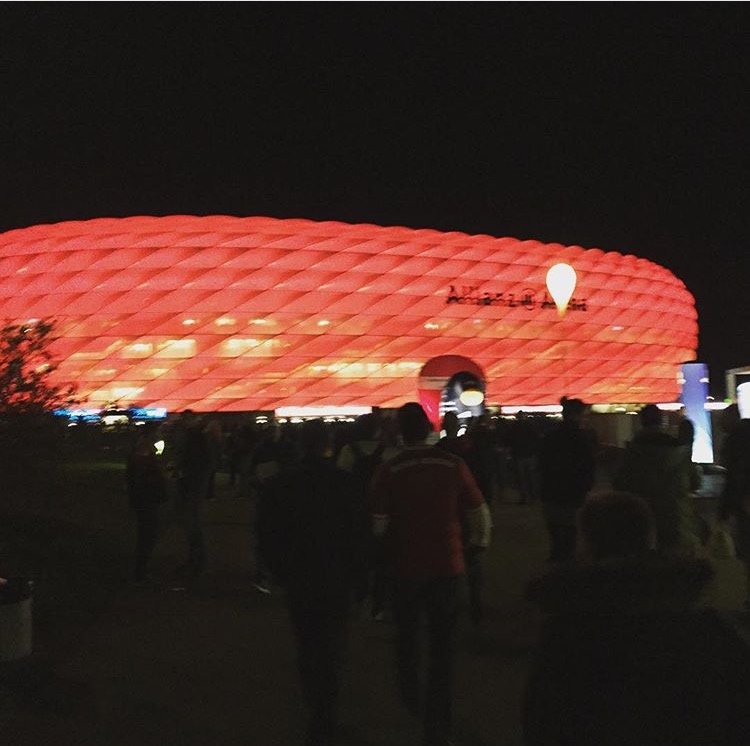 I expected Bayern to win with a degree of comfort, but really Arsenal laid out the welcome mat and put the kettle on for their Teutonic hosts. I felt that the Gunners actually looked dangerous when they broke to attack, with Cazorla able to dribble past the first line of Bayern pressure, space opened up and Arsenal looked threatening. The problem was, Bayern looked even more threatening and they monopolised the ball. It looked like a range war, with Munich packing bazookas leaving Arsenal to try and fling their bowie knives at the castle walls.

Once Özil’s equaliser was chalked off for handball, you were left with the feeling it would not be Arsenal’s night. Özil’s indiscretion took place at the other end of the field and the goal took an age to be ruled out, leaving the away fans celebrating vociferously for a prolonged period. Once the score got to 2-0, you could sense that the players would have signed up for the final whistle there and then. Each Bayern goal was greeted with an air splitting rendition of ‘Seven Nation Army’ and the typically understated patter of the German stadium announcer.

Much like the Sheffield Wednesday match, there was little anger or rancour in the away enclosure. At the final whistle, we melted away back to Marienplatz, in the centre of Munich for liquid refreshment. With no hotel, Terry and I were forced to sample the city’s nightlife well into the early hours of the morning. Annoyingly, we had been told that our bus for the airport would leave at 5am, only to find upon arrival at the bus stop, that we were set for a 6.40am departure. Our eyes burned with fatigue as we forced down another weißbier amidst the small splattering of baggy eyed night revellers and early morning commuters at Munich central station.

By the time our bus had pulled into the airport, my body was close to shutdown mode, my eyes forcibly closing and my head sagging towards my chin at regular intervals, before jolting myself awake again. I arrived home with my hair matted with window grease, my fingernails thick with black grime and my brain in that semi-conscious, sleep deprived state where everything takes on a slightly surreal sheen. It is in that mindset that I pen this missive, still having not slept, willing myself into consciousness with mug after mug of steaming hot tea. But the ordeal has been worth it, if only to have earned another decorative stripe on my fan uniform. And because I was a part of it, a small and insignificant part of an instantly forgettable evening. But a part nonetheless.