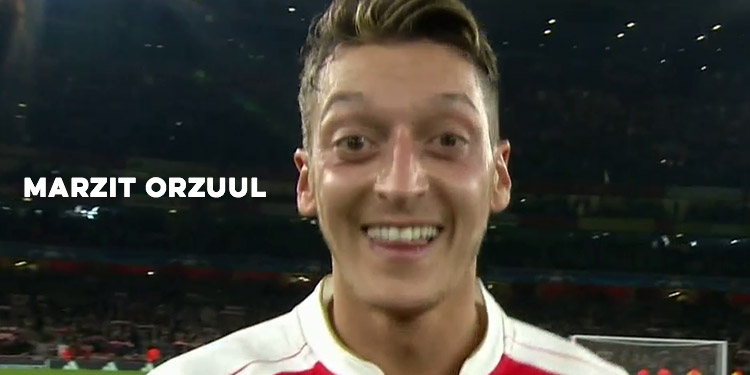 Morning. I feel like too often my work invades my subconscious. Last night I dreamed that I was writing the blog but I couldn’t spell the name of any Arsenal player correctly. There was no such thing as spellcheck and I would write something like:

No matter how hard I tried I simply couldn’t get the spellings right, even though I knew they were completely wrong. It became increasingly frustrating, especially as I was trying to teach a classroom full of children who were throwing stones at each other. Little twats.

Speaking of Marzit Orzuul, he spoke to Arsenal Player about his recent form, saying:

I’m really satisfied with my performances. I’m on a good way, I feel at ease and you can see that the team and the manager give me their trust.

We’ve been keeping our own Arseblog goals and assists spreadsheet this season to keep track of things more easily, and the 6 assists and 2 goals so far are a pretty decent return. The manager has challenged him to score more goals and while it feels a bit churlish to hope that in future his finishing from positions like the one against Bayern on Tuesday is a little more convincing, at least he was in that position in the first place.

He also spoke about the team’s desire to put right what had happened in the first two European games:

We concentrated from the first minute until the last minute. We believed in ourselves and we knew that we had made massive mistakes in the first two games. Today was our last chance – we had to win. We did that and now we’re back in the game. We’re all the happier for that.

We showed heart and the fans supported us superbly. The most important thing is the three points. We have to believe in ourselves, keep working hard and then we’ll be on a good path.

I think what this year has shown us, with wins over Man City, Liverpool, Man Utd, Chelsea (Community Shield, in fairness), and Bayern Munich, is that when this team is fully focused and switched-on they’re more than a match for anyone really. It’s the games when we’re expected to win, or when that focus is less than 100% – even by 1 or 2% (which is all it takes at this level) – that we find ourselves in trouble.

I don’t think it’s a challenge just for Arsenal, but every sports team. It’s not uncommon to look at a team further down the league or with a supposedly smaller reputation and think you should win, but being able to manage those games better than the rest is often what sets a good team apart from a great one. Digging out a win, scoring late to nick the points, all those things that we saw Arsenal do in the past, Manchester United do in the past, those are qualities we need to find.

Still, it feels like we should still be basking a bit in the win over Bayern on Tuesday. Not simply because of the magnitude of it, but if we can take from it what we did when we beat them in 2013, then it will serve us well. Even with all the talent in this team, it feels sometimes as if we doubt ourselves too often. When we went to Munich that March, we were in a bit of a mess.

We were scrapping for the top four with a Sp*rs side that had just beaten us at White Hart Lane and were urging us to ‘mind the gap’. We’d been knocked out of the FA Cup at home to Blackburn, and defensively we were a bit of a shambles. It was around then that Thomas Vermaelen’s Arsenal career really hit the skids, the manager deciding once and for all that Mertesacker and Koscielny were his main men in the centre of the defence, but after the 2-0 win we didn’t lose another game that season, pipped that lot to the top four having minded the ever-loving shit out of that gap, and it’s hard not to look at what happened in Munich as a driver for that.

The circumstances are obviously a little different this time around, but if we can channel the belief and confidence from Tuesday night into our performances in the future, it should make us a stronger side. That feeling that if you can beat Bayern you can beat anyone – coupled with the awareness that in order to beat anyone you have to be as switched-on as you were against the Germans, even if the pattern of the game is quite different.

As we know there are games when we’re going to be the Bayern, dominating possession and territory, and that’s a challenge we’ve found a little difficult at times. Hopefully though the variation in the side and the emergence of what looks to be a very effective ‘Plan B’ in Olivier Giroud will go some way to addressing that, but I think we might discuss that a bit more in tomorrow’s Arsecast.

We have to start thinking now about Everton and what the effects of such a monumental effort on Tuesday are. Spending that much time without the ball is pretty exhausting – physically and mentally – so it’ll be interesting to see if the manager changes things around. Again though, stuff we can cover on the podcast and on the blog in the days to come.

Right, that’s your lot for this morning. Tim Stillman will be here with his mighty column later, more from me tomorrow.