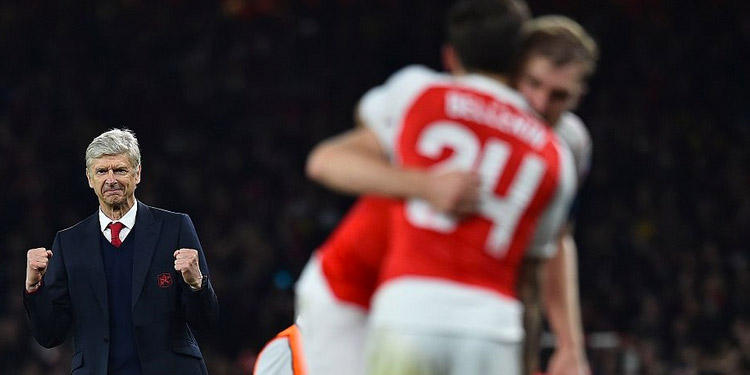 74:06′ – A slightly wayward pass from Francis Coquelin allows Bayern to spring forward and catch the Arsenal defence stretched for one of the only times in the match. Robert Lewandowski is through with just Petr Cech to beat. Laurent Koscielny strains every muscle to put him under pressure, and the Czech international makes a super ‘big’ save to deny the visitors a goal.

75:25′ – From the resulting corner and subsequent passage of play, Thomas Muller fizzes a shot just wide.

76’29 – Having won a free kick in midfield, Olivier Giroud is on hand – literally – to bundle the ball home after Manuel Neuer misjudges Santi Cazorla’s free-kick, and the Gunners are ahead.

92:07′ – In injury time, Lewandowski gets behind Koscielny with a superb turn, again he has a clear sight of goal. Perhaps the Frenchman shouts ‘jinx’, but the Polish international fails to shoot, and under pressure he puts the ball out of play for a goal kick.

93:04′ – After 93 minutes of gruelling defensive concentration and effort, Hector Bellerin finds warp speed to intercept a pass, drive into the box and cross for Mesut Ozil to wrap up the game. There are 6 seconds between his interception and the ball – just about – crossing the line. Yaaaaa, come on!

I highlight those moments not to suggest we were lucky, but just to illustrate how quickly things can change in football. Another 6 inches on that initial Lewandowski shot and it’s a goal. If he pulls the trigger late on, it could well have been an equaliser. But it also illustrates the way this Arsenal team played on the night.

As hard as you try, as disciplined and as organised as you are as a collective, you need individuals to rise above and, perhaps, have a little luck along the way. When we needed him, Cech was there to make the saves that you want from a world class goalkeeper, and I suspect Bayern will have felt a lot like Arsenal because this was a game that we’ve seen many, many times before.

In the opening 30 seconds Lewandowski hurtled towards, and into, our penalty, only a last ditch intervention by Bellerin stopped the start to the game being a disaster. In the 11th minute Cech made his first real save of the game, standing up well to Muller after superb interplay and movement gave him an opportunity from close range. A huge moment, in hindsight.

Bayern passed passed passed passed passed, and when we did get the ball we tried to make things happen too quickly, looking to use the pace of Walcott and Alexis to cause them trouble. But as the half went on, we grew into the game. Alexis should have done better when a corner landed at his feet, sitting up perfectly to be hit, but he whacked it over the bar.

A couple of minutes later we should have been ahead when a Monreal cross from the left found Walcott 6 yards out. He stooped and headed on target but Neuer made one of those most impressive of saves – a big hand scooping the ball off the line. There’s no question it was a brilliant piece of goalkeeping, but when it comes right down to it you’d expect any player to score from there, so it’s part great save, part bad miss for me.

At the other end carelessness from Alexis presented them with a chance, and after the break the game took up the pattern as the first half. Bayern passed passed passed passed passed, but looked to add end product. The exciting Douglas Costa fizzed a shot inches – if that – over the bar; Cech got fingertips to a Lewandowski effort; we lost Ramsey to a hamstring injury; Mertesacker blocked another Lewandowski effort after Alexis lost it; and the Germans had 71% possession to our 29%.

Giroud came on for Walcott and put himself about well. It didn’t quite change the complexion of the game in terms of the overall play, but he made a difference and gave us an outlet up front that proved important. He did stuff like this which helped ease the pressure, and his more typical centre-forward play won us the free kick from which we went ahead.

Bayern passed passed passed passed passed, and although there was pressure and the game was played mostly in our half, I don’t remember Cech having to make a single save between the time we went ahead and the final whistle – which is a real testament to how this team defended and stayed disciplined.

The late goal to seal it from Ozil capped what was a superb night of football. The accusations that Arsenal can only play one way were well and truly dispelled, and the best team in Europe went home with nothing.

We had an absolute necessity to win the game, and we did it in an intense and disciplined way.

And, somewhat unusually, spoke about the tactical approach to the game:

Bayern had more possession than us but we decided to make it tight in our final third and catch them on the break. I thought when we played very high up we stopped them from playing. When we were playing halfway they opened us up too much so I decided to drop Ozil a bit deeper and to make it tight around the box and catch them on the break because we have the pace to do it and to find some space with the game going on.

The best laid plans of mice and men and all that … it’s one thing talking about doing it, it’s another thing actually carrying it out, and for that the players deserve huge credit. To a man I thought the performances of every player were worthy of commendation, but on night’s like last night you need big games from your back four and goalkeeper and we got them.

Today is not the day to talk about previous decisions, but Petr Cech showed exactly why at 33 he’s worth £10m (and the rest). At important moments he made big saves, and the confidence he gives to the back four is evident. Having that experience at the base of the spine really does add something to the team.

The central defensive pairing of Mertesacker and Koscielny used all their experience to keep things tight back there; the hugely impressive Nacho Monreal continued his outstanding form with another majestic performance at left-back; while at right-back I’m almost lost for words when it comes to Hector Bellerin.

If you haven’t had a chance to read the transcript of his interview with Marca, it’s here – but what he’s doing, and how he’s playing, at 20 years of age is really a bit special. There are moments when that rawness will be exploited of course, but they’re moments, not prolonged periods of the game.

Witness the calm assurance as he tracks a long ball over the top and nods back to Cech in the 44th minute. Then watch him go go go as he digs deep to make that late interception and blister past a defender who had the edge on him in terms of his position. He’s just a fantastic talent and one who will hopefully grace our team for years to come.

Ahead of them you could probably pick out your favourites, and there’s no doubt everyone made their contribution defensively, but the game-plan was dependent on the defenders themselves providing the platform for those counter-attacks and they did that superbly.

If there’s any shine to be taken off it, the loss of Ramsey to injury isn’t ideal, but at least provides a chance for Oxlade-Chamberlain. While in the other game a late Olympiacos goal was a bit annoying, a draw there would have been better, but that was out of our hands.

The thing we did have control over we managed to perfection. It’s a performance and a result that should further boost confidence and belief inside and outside the squad, it just remains to be seen how much that took out of us ahead of Saturday’s game against Everton.

Still, that’s something we can worry about tomorrow or the next day. Today is for enjoying what was a great – rather than yet another disappointing – night in Europe.