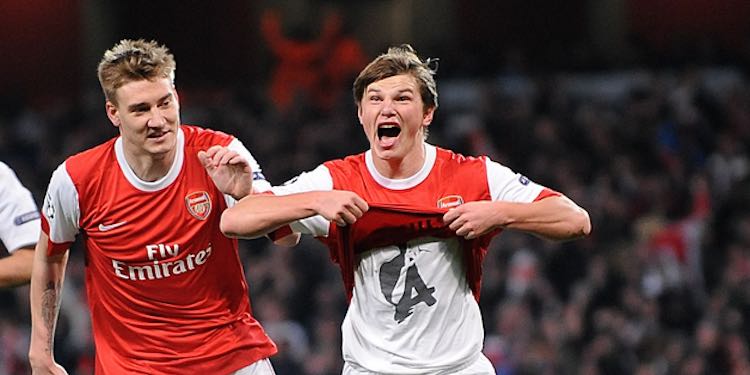 Just a word of warning, the new Mac OS – El Capitan – really ought to be called El Bandito, because having left it overnight to install on my iMac, it seems to have stolen all my apps. The only thing I have in my applications folder is System Preferences, and you can’t write a blog with that. I sense a long, long day ahead. It’s basically bricked my computer, so if you were thinking of installing it, I’d give it some careful consideration.

Maybe it’ll be good to have something to distract me from Arsenal. It’s kinda funny though, if results go our way this weekend, we could be top of the Premier League, yet in Europe the dismay is palpable after what was such a familiar result. We’ve been here before:

*this game followed by a 2-1 defeat to Borussia Dortmund and a 0-0 with PSV. This was also the era of 2 group stages.

Our best chance of winning the Champions League, bottled it at home against Wayne Bridge.

The personnel change, and I accept the circumstances of some of those games are different, but the failings remain the same all down through the years. That we actually made the final in 2006 with a back four made up from urchins and scamps remains a huge irony, but the fact remains that disappointing nights in Europe are not a new thing by any stretch of the imagination.

Of course it’s not impossible that we could still qualify, but it’s going to be very, very difficult. It means getting something substantial from one of the Bayern Munich games, and given the way they’ve been playing recently, you wouldn’t feel terribly confident about that. Maybe if we can keep 11 men on the field, and not miss penalties, we might have a chance – and it should be remembered that we did win there back in March 2013.

The prospect then looms of Europa League football. UEFA rules state: “The third-placed finishers in every group enter the UEFA Europa League round of 32.”

On the one hand it’s hard not to look down your nose a bit at the competition itself. It’s fair to say that FK Krasnodar, Slovan Liberec, Skenderbeu Korce, Belenenses, and Dnipro Dnipropetrovsk aren’t exactly the cream of the European crop, but isn’t there also an element of us getting exactly what we deserve? Do we have any right to be dismissive of a competition we actually have a better chance of winning, having fallen out of one that we clearly don’t?

On the one hand there’s part of me that thinks complete elimination from Europe would be better for us domestically. The Thursday/Sunday thing is difficult (not to mention it would completely mess around with my Arsecasting schedule – DAMN YOU ARSENAL!), and we’d have a better chance of finishing higher up the table if we didn’t have midweek jaunts to tire us out.

On the other hand though, what exactly is the point of finishing higher up the table to get back into the competition we’ve just been eliminated from that we can’t win and show no real ambition of winning either? The cycle continues and we do it all again.

The bottom line is that we haven’t been beyond the Round of 16 since 2010. The group stages and the one knock-out game provide us with some nice money, and that’s about it. How many great European nights have their been? For all the talk of playing the best teams, the excitement and frisson that comes with that, only that game against Barcelona really sticks out.

Beating them was fantastic, no doubt. Looking back the surreal sight of Arshavin scoring a goal, lifting up his shirt to reveal a t-shirt with himself on it as a somewhat bewildered Nicklas Bendter runs alongside him is the best thing about our Champions League exploits in recent years. And that really does tell its own story. Especially as it was followed by a somewhat contentious 3-1 defeat in the Camp Nou, van Persie red carded ludicrously at the time.

What have we done since in the Champions League that’s really worth remembering in any way? So perhaps a different tournament, a different dynamic, different teams, different nights, might be more at our level. Maybe it’s what we need, and if we get there it’s what deserve. Those who scoff at the Europa League now would still shout and cheer and celebrate if we won it, the short-termism of football fans will make sure of that.

I remember well that night we beat Southampton 6-1 at Highbury, days after a home defeat inflicted upon us by Leeds and Mark Viduka, ensured a title we looked set to retain was lost and went to Manchester United. Yet as soon as the first goal went in, the celebrations of that moment itself were a reminder that the game goes on, and you have to go with it. Otherwise, you find something else to do, right?

All going well, I’ll have an Arsecast for you tomorrow, but that’s entirely dependent on me being able to fix my computer because all my audio gear is attached to that. Anyway, fingers crossed, and be careful of El Bandito.