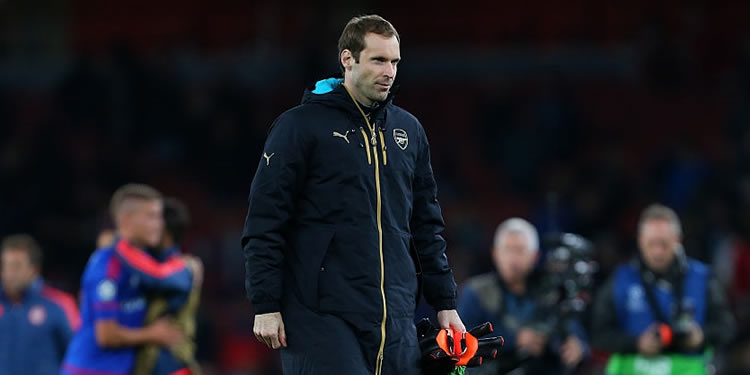 If you’re a long-time reader of this website you might remember YANDNIEFA®™. This was used when the likes of Thierry Henry, Dennis Bergkamp, Robert Pires, Patrick Vieira et al stumbled their way through European games, losing to clearly inferior opposition all too regularly.

YANDNIEFA®™ = Yet Another Disappointing Night In Europe For Arsenal. Today seems like a good day for a revival of that, but the D could also stand for dismal, dreadful, disgraceful, deplorable or dickhead because, frankly, this was a dickhead of a performance and a result.

The manager made some changes from the team that beat Leicester. I don’t think there can any real issue with any of them on a night when you’re playing at home. Gabriel and Gibbs for Mertescacker and Monreal in the back four; Oxlade-Chamberlain and Coquelin to the midfield; no issues. Those players should be able to come in and perform.

It’s the selection of David Ospina over Petr Cech that has people exercised. In a television interview before the game Wenger said that the former Chelsea man was carrying a calf injury, something I wondered about yesterday. It wasn’t bad enough to keep him off the bench though. You could ask if that’s a sign he wasn’t really injured, but I remember a European game last season when Ospina was brought off the bench, aggravated an injury he’d been carrying and missed months, so there is form for that.

Pressed on it afterwards, the manager was tetchy:

I know many things that you don’t know and that you ignore. You cannot select a team by using a poll and getting everyone’s opinion before the game. I don’t have to tell why you I picked Ospina. I do not have to give an explanation.

I think we have to accept that a manger, any manager, knows more about the physical state of his players than anyone else. Pundits, fans, whatever. He works with them day to day, he’s aware of the small aches and strains that aren’t actual injuries that might turn out to be – and odd selection choices are very often down to protecting a player from that problem becoming more serious. However, if Cech has a problem, and that’s why you selected Ospina, why not just say it?

My number 1 keeper is carrying a knock, we play Man United on Sunday and I want to make sure he’s for that. As well as that, the keeper I did pick should be good enough to get through the game without chucking one in.

It’s a perfectly acceptable explanation that most right-thinking people understand. For the record, I think Cech does have a problem, I wrote as much yesterday, but Wenger’s cranky defensiveness over the situation does him no favours at all.

The Colombian had no chance with the first, the concession of a silly corner because of a mix-up between Koscielny and Gabriel provided them a chance which deflected in off Alex Oxlade-Chamberlain, leaving the keeper rooted to the spot. An element of bad luck about the goal, but there was no bad luck about not closing down the man more quickly or allowing the corner in the first place.

We responded, Alexis feeding Walcott whose finish was a touch fortunate, but that’s his 4th goal of the season and at times, when we had space and time, the pace we had on the break was glorious. Oxlade-Chamberlain should have scored earlier on, and Walcott himself passed up a good chance as turned defence into attack.

But then Ospina’s moment of madness. His positioning seemed wrong for the corner, he caught the ball, dropped it over the line and the official behind the goal flagged to ensure Olympiacos went ahead. It’s a historic moment because it’s the first time one of those officials has ever done anything, but in every sense it was a real goalkeeping howler.

The second period was pedestrian as they sat off and we tried to find an equaliser, but things changed with the introduction of Aaron Ramsey. The Welshman added something to us as an attacking force, some incisive passing allowed us to find space in behind, and when Walcott crossed for Alexis to loaf home a header to make it 2-2 it felt like the momentum was with us.

That was until we allowed them to score almost straight from kick-off, less than 60 seconds after we’d pulled level we were behind again. Disappointing, dismal, dreadful, disgraceful, deplorable, dickhead.

We huffed and puffed, they defended like mad and wasted time – and why wouldn’t they? Ozil saw a free kick well saved, Alexis headed just wide from a Gibbs cross, Ramsey had a speculative effort from distance, and the last kick of the game was an Oxlade-Chamberlain effort which trickled wide, which kinda summed things up.

Once more masters of our own downfall, our never-ending ability to push the self-destruct button in new and imaginative ways remains well and truly embedded in our DNA. Afterwards, the manager said:

Some aspects of our game were quite good but I thought we lacked quality defensive concentration and we played against Olympiacos who defended very well. I believe we had a bit of bad luck as well because they had four shots on target and scored three goals and that happens once in 100 Champions League games.

Except that’s not bad luck. It’s bad defending. And when it keeps happening it speaks to a fundamental problem in the team. How often have we bemoaned the amount of goals the opposition score from fewer chances, as we blast shots from everywhere and end up struggling to score? You know how you deal with that? Defend better, maybe buy a good goalkeeper and oh …

It’s also a bit disingenuous to blame bad luck when Olympiacos become the third team in the last 12 months to score three times at the Emirates. Anderlecht in that glorious 3-3; Monaco when they took advantage of our ineptitude to knock us out last season; and now this. There’s no bad luck involved at all. It’s entirely down to poor performances.

A few weeks ago on here I sort-of jokingly asked what was the point of Newcastle after I watched them turn in another insipid performance in the Premier League. This morning I’m of a mind to ask what’s the point of Arsenal in the Champions League? We don’t ever seem to learn from our mistakes, we certainly don’t invest in the team as if we have any serious ambition to go and win it, and time and again we find ourselves on the end of results which are nigh-on embarrassing.

Last night was a shambles, and the weight of that will fall on the manager. When you stick rather than twist in the transfer market it’s an obvious gamble, but if results that might have been avoided with greater investment become the overreaching arc of the season, then there’s simply no hiding place. Win your games, you justify your decisions – if you don’t, it’s on your head and that’s the reality of it.

So, no points from two games and we now realistically have to get something from Bayern Munich to qualify. Whether anyone considers that realistic or not is another question. There are those who will point to the disappointing start to the Champions League campaign in 2003-4 when we took a single point from our first three games, including a disappointing loss which involved a goalkeeping error, then went on to top the group.

Of course it’s not impossible, but that was a team that would become Invincible that season and had a manager that was as idealistic as he is now but with the players to carry it off. Unless we can do something remarkable against Bayern, we’re looking down the barrel of Thursday nights and Europa League … at best. Won’t that be fun?