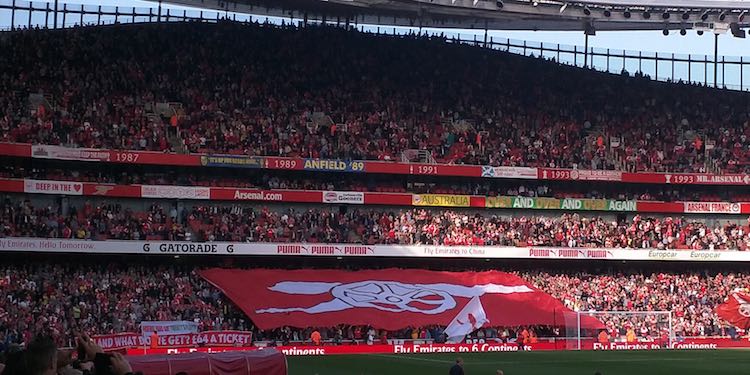 Well well well, just when you think you’ve seen everything from this team, they go and do something like that.

The word I heard a few times after the game was ‘blitzed’. United were blown away in the opening 20 minutes by an Arsenal side that were powerful, incisive and clinical. The team was as expected with no wildcards to throw United’s preparations off. They must have seen the line-up and thought they knew what to expect – but it would be fair to say that not many Arsenal fans could have predicted the way we began the game.

A move down the right in the 6th minute saw Mesut Ozil cross low to the near post, Alexis’s brilliant flicked finish left de Gea floundering. There was barely time to let it sink in before we doubled the lead. This time Theo Walcott was the provider, finding Ozil in the box and German’s first time side-footed finish was perfection, the keeper didn’t even move.

It felt a bit surreal, probably because we haven’t come out of the blocks that quickly against anyone for a while, and certainly not against a team of United’s stature. When Alexis powered home a third in the 20th minute, smashing it past de Gea after making space for himself on the edge of the box, it was delirium. The stadium was rocking, the players full of confidence, and United looked shell-shocked.

We pressed and harried, gave them no time on the ball, and in that first 45 minutes we could have scored more. One chance for Aaron Ramsey at the back post would have given him nightmares if we hadn’t been 3-0 up already; Walcott pulled a shot wide; and in general we bossed the first period completely.

Even when they did have a chance late on, Cech saved really well from Martial, and the importance of that stop was obvious. Going in at the break having just conceded a goal would have brought about some jitters, no question about it, and it just shows you the benefit of having a top class keeper. He was a real presence throughout the game, his handling and distribution was fantastic.

United brought on Fellaini for the second half knowing that the woolly-haired Belgian is made from the same kind of stuff as Diego Costa in that he’s allowed foul his way around the pitch without picking up a card. And fair play to him, that’s exactly what he did, the referee oblivious to his kicking, holding, strangling, and the rest.

They upped their game simply because they had to, while we were happy to let them have the ball, looking to hit them on the break. It meant we had to be switched on defensively, particularly as they spread the ball wide to try and find space for crosses. The full backs were excellent. I was sitting in line with Nacho Monreal in the second half and the Spaniard really is a player enjoying the best form of his Arsenal career.

When the ball did make it into the box, Mertesacker and Gabriel were there to clear, while the midfielders were hard-working and diligent. If somebody had to be chased, they were chased, even if the legs were a bit weary at times. And when there was a moment of danger, Cech was there again to make a good stop at the feet of the attacker.

If we could rightly criticise Arsenal’s game management against Olympiacos, we have to praise it today because they saw out that second half perfectly. Concentration was at 100%, their efforts became frustrated and desperate and it’s always good to see Rooney drop deep to try and make things happen, because it’s usually a sign that United aren’t functioning properly when he does that.

There might even have been some icing on the cake late on when Giroud shot straight at de Gea when he should have scored, before Oxlade-Chamberlain’s chip rebounded back off the crossbar. The cake was delicious enough on its own though, the victory more than merited and achieved with the kind of performance we know this team is capable of but that we don’t see often enough.

It was a strong response against Manchester United following our disappointment on Tuesday night. It shows the group is very united and very strong as well and from goalkeeper to No 9 everybody played very well, which is what you want.

The pressure on any disappointment today is massive and it’s maybe a little bit more difficult to deal with it but we did well.

It’s difficult to single out individuals when the collective performance was so good, but obviously Alexis’s two goals make him an obvious choice. It was a little worrying to see him holding his groin when he came off and with two games for Chile upcoming we’ll have to hope that he doesn’t do himself any further damage. But what a player he is – when he’s in this kind of form he makes such a difference.

Around him I thought Ozil was great – nice to see him get off the mark – while Theo Walcott is winning the Great British Bake Off with the humble pie he’s serving up to people, myself included, who had doubts about him as a centre-forward. He didn’t score but his all-round game was superb, strong and intelligent.

Behind them the midfield triumvirate of Ramsey, Coquelin and Cazorla provided the platform, and I’ve already mentioned a back four and goalkeeper who carried out their duties almost to perfection. All in a all a brilliant day. It felt like we really needed that kind of performance, especially at home after some unconvincing displays there, and although we now go into the Interlull we go into it in much better shape than perhaps we thought we would.

The key now is to be able to pick up where we left off and add some consistency to our performances. Because if we can play like that more regularly, it will make our season very interesting indeed, regardless of our European woes.

Right, that’s just about that. The Arsecast Extra obviously won’t be out until tomorrow because we’re recording a live special tonight. Myself, James and guests will be in The Garage Highbury and Islington this evening. Doors open 6.30, come have a beer, we’ll kick off around 7.30 and there are still a few tickets left.

I’m assuming you can pay on the door, so please feel free to come and join us as we recap the United game, take questions, and see where the night takes us. It will be available as a podcast tomorrow.