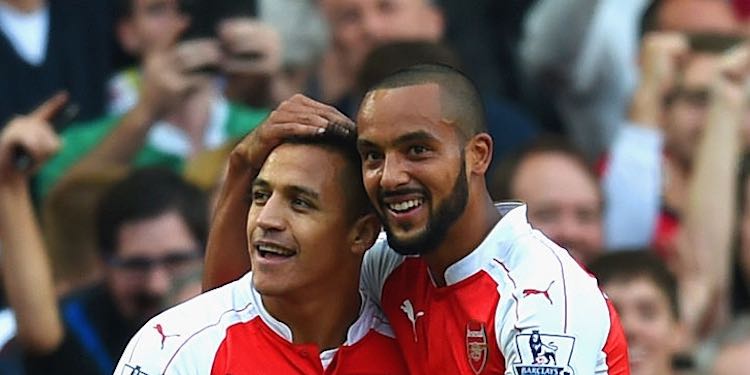 I should start this morning with a big thank you to everyone who came out last night for the Arsecast Extra LIVE. James and I were joined by Philippe Auclair and Paolo Bandini, and although it was a pretty miserable evening in London,  the rain didn’t dampen the spirits any.

There was lively discussion of Arsenal’s stuffing of Man United, our European (mis)adventures, Alexis and his incredible body, Petr Cech and lots more. We then had a Q&A section with the audience, and it was all great fun. You can listen to it later on today after I get back to Dublin and put it all together.

I think it’s probably about 90 minutes in total, so hopefully that will make it up to the people on Twitter over the last 24 hours asking me where the podcast is despite me talking about the live event on every show for the last two weeks, referencing it in the blog and on Twitter itself right up until showtime yesterday. It’s heart-warming to know people pay attention to what we’re talking about.

Anyway, thanks again to everyone who came, the support is greatly appreciated by James and I, and it was really nice to meet so many of you at the venue (which was fantastic, cheers Carlo and Greg). We must do this again soon.

Back in the world of Arsenal there’s been post-game chatter as you’d expect. It happens after a loss when we hear all the stuff we don’t really want to hear, but it was interesting to see Theo Walcott talk about a players’ meeting before United. He said:

The players spoke to each other on our own and we wanted to do this for the fans.

He also referenced doing it for the manager after the criticism leveled at him for the midweek defeat to Olympicos. He went on to say:

It was the best football I have been involved in. We should be playing like that every week.

Walcott’s sentiments were backed by Francis Coquelin who also used the c-word with abandon:

Obviously we have to be consistent. The most important thing is to carry on now and keep getting the results. We are getting stronger against the big teams. We beat City last season, now United. It’s all about consistency.

It was something that came up at the show last night, because when you see us do what we did to Manchester United it’s hard to tally that with some of the displays we’ve witnessed in the past – even this season. Of course there are all kinds of factors that influence a game and the performances, and we’ve also had this feeling before where we see us play a certain way and it feels like that’s the blueprint.

Form fluctuates over the course of a season, as we know, and maybe what we saw against United was a team that finally found its groove. That could manifest itself in a sequence of excellent performances and results, but you wouldn’t be an Arsenal fan if you didn’t half-fear a more insipid day out when we go to Watford immediately after the Interlull.

So, finding consistency of performance can be a difficult thing because so much of it depends on other factors. What the opposition do; how a referee performs; how we’re set in terms of player availability and injury; our preparation; have we had midweek action while the team we’re playing have not; and lots more.

Consistency of effort, however, is what we do have the most control over. Take Theo Walcott for example. Around the ground on Sunday there was great appreciation for his performance (and from the manager afterwards too), not simply because his centre-forward play was intelligent, strong, and effective. He linked up brilliantly with Alexis and Mesut Ozil, his movement was smart, his use of the ball significantly better than it has been in the past.

But it was the Alexisian endeavour that really got people stirred. You don’t usually associate Walcott with sliding tackles on the halfway line, but when he slid in, took the ball, and helped Arsenal maintain momentum in the game, it was a moment that illustrated how this team were approaching the game.

Again I realise the circumstances played a part. Having lost to Olympiacos they obviously wanted to respond, and when you’re playing Man United it adds something a bit extra to proceedings. You want to beat them so you’re willing to go the extra mile. To chase. To harry. To dig in. To push yourself that little bit further.

The reality is though that this is what you have to do in every single game if you want to be champions. It can’t just happen because your pride has been wounded by defeat to a team you were expected to win, and because you’re playing a traditional rival. One swallow does not make a summer, and all that.

Maybe if you analyse it closely in terms of how we played the difference between the United performance and one where we don’t play so well is relatively marginal. The amount of tackles made, runs tracked, interceptions made, and so on, may well be quite similar, but it’s finding the ability to tap into that extra couple of percent more often that will prove decisive.

The proof of that will be found after the Interlull. We can be sure they’ll be well and truly up for the Bayern games, but will it be the same against the likes of Watford, Everton and Swansea? We’ll see. I hope so, because we’re in a good position domestically and it would be a shame if we couldn’t genuinely build on what was a fantastic day against United.

Right, that’s that for this morning. Podcast available later, until then.