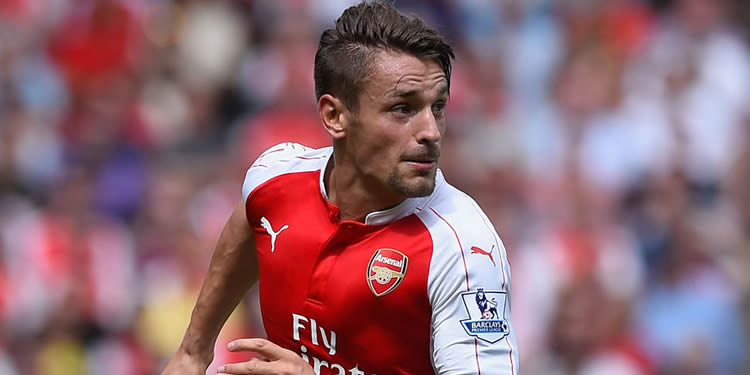 Morning all, is there anything more tedious than the Saturday of an Interlull?

The answer to that is yes, yes there is. It’s Phil Collins taking the lead role in a 7 hour on-stage adaptation of The English Patient – the world’s most boring film – performed to a soundtrack of Fast Car by Tracy Chapman while the teacher from Ferris Bueller’s Day Off explains the use of Anti-Dilution Provisions in stock trading.

But thankfully those sort of things are rare, unlike Interlulls which are all too frequent and we’re slap bang in the middle of one now. Ireland played Gibraltar last night. I didn’t watch, but it was on behind me in the bar I was in last night. Such was the interest, not a single person cheered when the goals went in. It was 0-0, I assumed it was still that but had a quick look and there we were, a goal ahead against the mighty Gibraltarians.

I presume Ireland won in the end, but I went and got some pizza. It was delicious.

Mathieu Debuchy was in the news yesterday being quite forthright about his situation at Arsenal. After a debut season to forget when he spranged more ligaments than any man should, his absence left room for the emergence of Hector Bellerin and that’s given the French international pause for thought. He said:

It’s difficult. Even though I didn’t play a lot last season, in my head I thought I’d return to the starting lineup after my recovery. But at the Community Shield against Chelsea, Wenger chose him, Bellerin.

It was a surprise and a disappointment. Let’s say it crossed my mind [leaving]…but I want to be at Arsenal and to regain my place.

And a chat with the manager seemed to sort it out:

He told me nothing was gained and that there’s a lot of games over the course of a season. He knows I’m worried though because there’s an important deadline at the end of the season.

He obviously wants to be involved in Euro 2016 and who can blame him for that. It feels a bit flouncy though, the first sign of competition and he’s thinking about leaving. On the one hand you’d expect a senior pro like him to understand the situation he finds himself in. The injuries really were unfortunate, and you have to have every sympathy for him – especially the second one which I maintain was real piece of nastiness from Arnautovic – but that’s what happens in football.

When a door closes for one player, it opens for another. Just as we’ll see later on this season when Joel Campbell strides and strikes to prominence in the absence of Danny Welbeck, scoring more goals than ever before (which would be, like, one, or whatever, but still). On the other hand though, maybe a senior pro, someone who’s been in the game a long time now, recognises the talent and potential of Him, Hector Bellerin, and can see the writing on the wall.

I think the signing of Debuchy to replace Sagna was a very smart one. If not quite like for like, it meant a key position wasn’t stripped off all the experience it requires. And the manager must have known he had some good young options there who could learn from, then challenge, the former Newcastle man.

Bellerin’s rise to prominence, however much potential was seen in him, happened sooner than anyone expected though, and the reality is that he’s pretty much established himself as first choice now. Not that Debuchy doesn’t have a role to play, the season is long and there’s a lot of football to play, but if the young Spaniard continues on this trajectory we’re looking at Arsenal’s right back for years to come (interestingly, something Mikel Arteta said last year could happen).

Debuchy is 30 now, not exactly old but definitely in the September of his career, and if he sees himself as a bit-part player then leaving doesn’t seem that unreasonable. And if the other side of that is that we have a younger, quicker, better player, then that’s just the way football works sometimes. Anyway, I don’t think it’s something that will happen this season, unless we get to January and he’s going bonkers with frustration. We shall see.

Other than that very little to report this morning. If you haven’t yet had a chance to listen to this week’s Arsecast you can find it here (or below):

More from me tomorrow. Have a good Saturday.