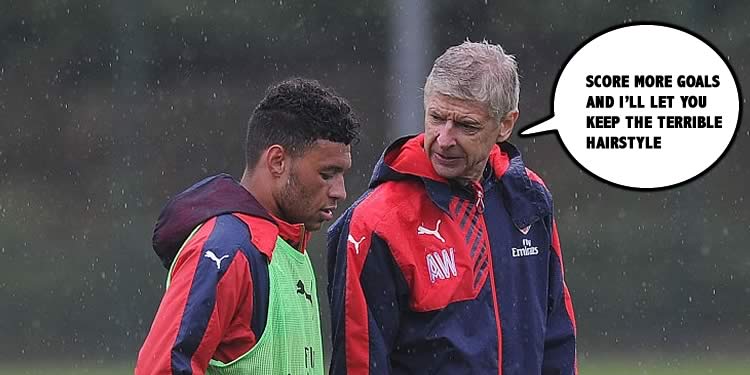 Quick Saturday round-up for you, as there’s a bit to get through and a game of football as the Emirates Cup kicks off later on.

Firstly though, Arsene Wenger was asked about the comments made by Lord Harris of Peckham in which he declared us as rich as Croesus and capable of buying anybody we wanted. He said:

He has gone a bit overboard because that’s not true. We are in a situation – I explained many times – where we are working hard if an opportunity comes up to do something, but we are not in the need.

Diplomatic, I think you might say. From a financial point of view, despite the fact I spent most of yesterday ‘offline’, I could see the idea that we had £200m to spend take hold in some quarters. If people are so inclined, they can always look at the books which tell you exactly what’s what, but that figure is clearly not what we have in our transfer kitty. That’s not to say it isn’t substantial, but it’s not £200m.

As for going public on the manager’s intentions, it sounded very much like the kind of stuff a man would say if he thought he was off the record. The provenance of the story is unclear, but it wouldn’t surprise me if that were the case. It’s not particularly helpful in any way to talk about what we’re trying to do in the market for all kinds of reasons that are fairly obvious, but it’s water under the bridge now.

Still, I do think those comments will have raised expectations for what might happen between now and the end of the transfer window, so whether than becomes a thing we’ll have to wait and see. Pressed on whether or not Karim Benzema was the name, and the player’s agent who said the he’d be staying at Real Madrid ‘1000%’, Wenger said:

One thousand per cent is a lot! That looks quite convincing. I do not come out with names anyway.

Whatever the truth of any of it, it doesn’t seem as if anything is imminent, and as I said yesterday, the chances are this could go right of the end of the transfer window, so I’m not going to get too worried about any of it just yet. One thing that is imminent, however, is Wojciech Szczesny’s move to Roma, with the manager revealing his absence from the Emirates Cup:

Szczesny will not be involved because he might move to Roma. We are pretty much done, it’s down to paperwork.

It’s pretty unusual for a player like Szczesny, at his age and having lost his first team place, to go away and come back to reforge a new career, but it sounded very much like Wenger was leaving the door open for him to do that:

I believe he will have a future at Arsenal because I rate him highly. I don’t want the opportunity he had at a young age to be wasted. He was open-minded about the move. He was ready for a fight here and he was ready to go somewhere and play. I believe he trusts me on that.

I still like him, I have to say. I think there’s big potential there, but that it hasn’t been realised is down to him. He’s the reason he lost a place in this team that should have been his for years. I’d like to see him do well in Serie A and come back to fight for his place at Arsenal, but we all know that when loan moves like this happen, the chances of a triumphant return are very slim. Can he a goalkeeping Coq? We shall see.

The absence of Mathieu Flamini from this weekend’s events was explained away via injury so there are two possibilities here. The first is that he has genuinely picked up a knock of some kind. The second is that any move away – and he was linked strongly with Galatasaray last week – isn’t at the point where the manager feels comfortable about making the details public in the same way he was for Szczesny.

The others missing out are Tomas Rosicky, already reportedly out until mid-August, and Danny Welbeck who is still sidelined with the knee injury that kept him out of the end of last season and the FA Cup final. Today’s game against Lyon kicks off at 16.20 UK time.

Further interesting stuff from the boss about how he wants more goals from his squad next season, and while folks will firstly point to the transfer market, another part of that solution to that is to get more from the players we have. He says:

What we want is some more goals from some players who are not really strikers and that was our strength traditionally. Our offensive and creative players scored 10 to 12 goals, that’s what you need. In the second part of last season we only conceded 13 goals in 19 games. So we want to keep that and add a few more goals. I think we can find that from inside, I am convinced of that. If we can find it from outside then we will do it as well.

As Andrew Allen points out in the article, “Danny Welbeck, Theo Walcott, Mesut Ozil, Santi Cazorla and Alex Oxlade-Chamberlain scored just 31 goals between them”, with only three players getting into double figures last season (Alexis, Giroud, Ramsey). I’m all for additions, but I also think we should be looking for more from certain players.

I’ve spoken before about how this is the season when Oxlade-Chamberlain really needs to add end product to his all-round game, and if Walcott is fit then he’s got to try and replicate that one fantastic season when he scored 21 times. Given that Alexis will miss the start of the season, we have to look at others to take up the slack, and I do think there’s room for improvement from some of the players we have already.

Finally for today, if you’re a fan of the Arsenal Ladies, check out this fantastic interview with goalkeeper Emma Byrne by Tim Stillman.

Right, that’s that. Stuff on the game etc later on, more from me here tomorrow.