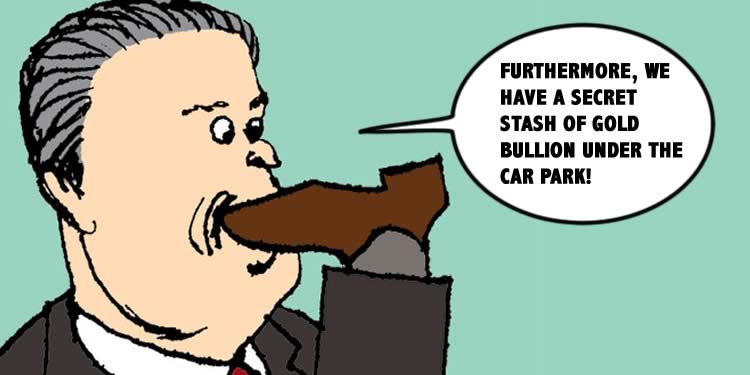 Morning all. One of the things Arsenal have been renowned for over the years – particularly in the Wenger era – has been almost a code of silence over transfers and the clubs intentions in the market.

Sure, there was that time Danny Fiszman said in 2008:

If Arsène said he needed £30million for a striker, he would get it, no problem at all.

And various noises from the boardroom down the years about how if the manager wanted some cash for a new chap all he had to do was go and ask. However, I don’t think we’ve quite ever heard anything like the quotes purported to have emerged from Lord Harris of Peckham, Carpet Master.

He’s gone quite large on how much money we have to spend and who the manager wants to spend it on, telling the Daily Mail:

At the moment there are no plans to sign anyone, unless he finds a real superstar like Mesut Ozil or Alexis Sanchez. He’s looking for one of those but there aren’t many available. We would back him to break the club’s transfer record. If he wanted the man, he could have him. Apart from Messi and Ronaldo, he could have any player. We will probably have to break the club record to get the man he wants. In the accounts, there’s over £200million in the bank.

Of course £200m in the bank doesn’t mean there’s £200m to spend – although I suspect that’s not going to the focus of much analysis. Soon it will become a thing that we have £200m to spend and WHY AREN’T WE SPENDING IT ALL NOW. Such is the world we live in. He went on to talk about the player that the manager’s after with that £200m that we have to spend (dammit):

On the list is a centre forward, but I’m not going to tell you who he is. You’ve got to get the other team to want to sell him, but I think he wants to come. It basically comes down to whether the other team can find a superstar to replace him, because they don’t have to sell.

Well, interesting and all as that is, I can’t imagine it’s information the club particularly wanted made quite so public. In terms of what he’s saying, it’s pretty much on a par with the general thinking around transfers right now – that in order to really improve the squad you’ve got to buy from the top shelf (and I don’t mean magazine shelves here).

That process is more difficult because there’s not as much choice, it’s more expensive, and there’s probably a lot more to deal with because these guys know they can command high fees, high wages, image rights and so on. Basically nothing we don’t already know but still stuff I’m sure the manager would have preferred to be kept in-house.

He also talked about the only signing of the summer so far, Petr Cech:

He wanted a top goalie, so we went out and got him. Since Jens Lehmann or David Seaman, we’ve not really had a world-class goalie. We made enquiries about Cech last summer but Chelsea couldn’t sell him because they didn’t know how Courtois was going to settle in.

I don’t care about any of the other words in that little bit apart from ‘goalie’. Tremendous. Goalie, goalie, goalie. Magic.

So, in conclusion, we’re after a striker, who is going to cost a lot if we can get him, but that depends on his current club finding someone else so it’s a bit like the Ozil thing when Real Madrid were waiting on the Gareth Bale deal to be done before letting him go. As is often the case, what you want to do in the transfer market is dependent on other clubs being able to do what they want to do. It’s not always in your own hands.

Those with sharper minds that mine this morning can probably make a very, very short-list of who this centre-forward might be. There aren’t too many of them around at the top level who would be this difficult to get. Benzema? Lewandowski? Cavani? Zlatan?! Bar the ‘untransferables’, like Messi, Ronaldo, Neymar, and Suarez, that’s kind of it, right? I’m struggling to think who else there might be.

And if a move is dependent on the other team finding a ‘superstar’ in a market where they’re very few and far between, then this could drag on for the rest of the window without a satisfactory conclusion for all involved. Essentially, as I’ve said before, I think any further transfer dealings we’ll do will be opportunistic based on how the market shifts and who becomes available because of that.

In the meantime, some of the other directors, like Lord Quimmington of Camden, the Third Duke of Axminster, and Sir Waffles Magee, might just have a word with Lord Harris and tell him to not answer the phone so soon after lunch.

Other than that not a lot going on other than Wojciech Szczesny’s move to Roma which is expected to be completed pretty soon. I’ll have some more thoughts on that when it goes through. If you fancy having a quick peek at what’s apparently our third kit for the upcoming season, you can check them out here. One of the ages, I’m sure you’ll agree.

Right, lots to do. Remember, you can always find the latest stories throughout the day over on Arseblog News, I’ll be back tomorrow as usual.

Until then have a good Friday.