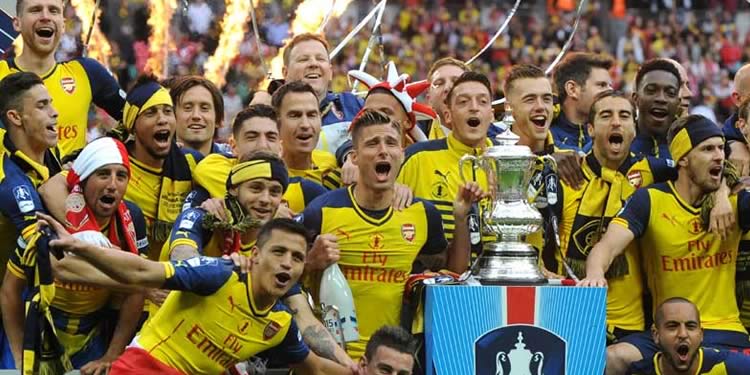 Wojciech Szczesny: Failed to build on a good 2013-14 campaign, and lost his place through his own stupidity. Not anywhere near as bad as critics made out, however, but despite his intentions to stay his future must be touch and go. C-

David Ospina: The Colombian was made first choice in the Premier League in January and didn’t look back. Has been calm and fairly reliable for the most part. B

Damian Martinez: Made 6 appearances before a very successful loan spell in the second period of the season. Hard to rate from an Arsenal point of view.

Mathieu Debuchy: His first Arsenal season was beset by injury but when he did play he looked like the solid, experienced player we all thought he was. C+

Calum Chambers: Started very positively indeed but as the season went on found it difficult to maintain that consistency. It’s not uncommon for young players, I expect him to improve next season. C-

Hector Bellerin: The young Spaniard has come from the brink of a loan move away to an exciting, reliable first choice option. Again, has to maintain that level next season. B+

Per Mertesacker: Struggled in the first half of the season but found his form eventually. No player played more Premier League minutes for us, and captained the side to an FA Cup win in which he scored. B-

Laurent Koscielny: He had his injury problems in the early months but when he returned alongside Mertesacker he looked back to his best – and his best really is very, very good. B+

Gabriel: It’s hard to judge really because of how little he’s played, but he’s shown promising traits and the fact he looks comfortable with either of the senior partners augurs well for the future. C+

Kieran Gibbs: Began the season as first choice left-back, then had to watch on as Nacho Monreal usurped him. It felt like a season in which he plateaued somewhat. C

Nacho Monreal: A spell at centre-half proved challenging – if not the disaster some made it out to be. It seemed to benefit him as he returned to his natural position and was fantastic there until the end. B+

Mikel Arteta: The skipper had a season more or less destroyed by injury. His performances before he broke down were a symptom of an underlying problem. D

Mathieu Flamini: Played quite regularly, and not badly, in the first half of the season, but the emergence of Coquelin showed what a younger, snappier version of what Flamini would like to be brings to the team. C

Francis Coquelin: To do what he did and to make the impact he did under those circumstances is little short of remarkable. I’ve never seen anything like it before, to be honest. A

Aaron Ramsey: Had some issues with injury in the early part of the campaign but ended up with 10 goals and doing an important job from an unfamiliar position. B+

Jack Wilshere: Once more a season impacted hugely by injury – albeit one that came from a nasty challenge rather than any fundamental weakness. Looked good when he returned but must stay fit to realise his potential. C

Santi Cazorla: Thrust by accident more than design into a deeper lying midfield role, he thrived, the performance against Man City stands out. Almost ever-present (37 games in the PL), he scored 7 and even from deeper created 78 goalscoring chances. A

Mesut Ozil: Like others the first half of his season was difficult, and he missed 3 months with injury. Looked stronger on his return and some of his performances have been sublime. I expect a lot in his third season. B+

Alex Oxlade-Chamberlain: Used a lot in the first half of the season, he looked to be making real progress until injury halted him. Needs to add a bit more end product, but I still think he took a step forward. B-

Tomas Rosicky: Only 8 starts this season, but scored 3 goals. Much as I love him, and I do, I’m a little surprised he’s chosen to extend his contract as if others stay fit he’ll play even less. C-

Abou Diaby: Just one Carling Cup appearance despite some run-outs for the U21s. The club have been good to him, and we can only wish him well in the future, but there’s no way any new deal should be offered. N/G

Alexis Sanchez: What a debut season he had, capped with the most incredible cup final goal you’ll ever see. He had a lean spell, came through it, but the way he dragged the team through the first half of the season stands out – as does his relentless effort and energy. A+

Olivier Giroud: Looked to be on course to better his previous season totals, but lost form in the final 8 games of the season. Still had a big impact between November and April when he took up some of the Alexis slack. B+

Danny Welbeck: Filled the Giroud gap well with some very promising early season performances, a tremendously hard-worker but just one goal after new year is evidence he needs to step it up in terms of end product. C

Theo Walcott: Returned from injury, scored a few, then lost the trust of the manager until the final week of the season when he exploded into life. Some early-summer clarity on his future would be welcome. C

Lukas Podolski: A substitute for most of his time here this before a loan move to Inter Milan. Is surely now completely surplus to requirements, a summer sale inevitable. #D-

Joel Campbell: Lauded by some as player who never got a real chance, when given that chance in Spain with a loan move to Villarreal managed just one goal in 22 appearances. Hard to see him make the grade. D-

Yaya Sanogo: Got his first Arsenal goal against Dortmund, sent on loan to Crystal Palace in January where he failed to score in the league (got one FA Cup goal). It’s very difficult to see how he fits in, but I suspect the manager will keep him around or at least loan him out for a full season. D-

So, there you go, there were some real stand-out performers and of those that were regular in the squad nobody really plumbed the depths. A solid season overall with a third place finish and the FA Cup win to add to the trophy cabinet. I don’t think anybody’s under any illusions that we’re the finished article or that things can’t be improved, however it seems much easier to see how this can happen next season than any time in the last 6 or 7 years.

Anyway, ratings like this always tend to spark some discussion so feel free to get stuck in on the arses with your own assessments and ratings.