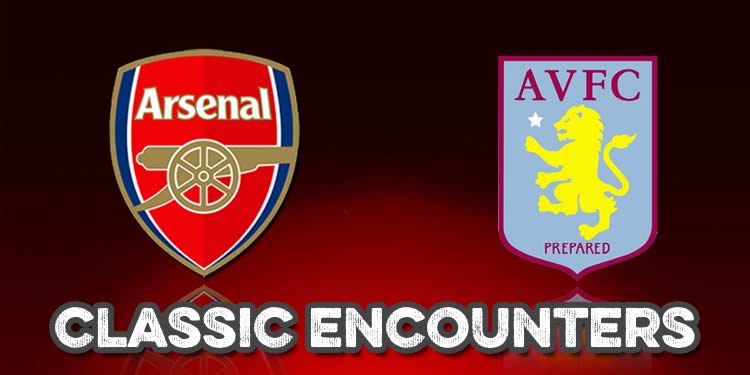 Looking ahead to this weekend’s FA Cup Final against Aston Villa, Tim Stillman will be bringing you a series of articles building up to Saturday’s showpiece, starting today with some classic encounters between the the two sides.

Arsenal and Villa have played one another 176 times in total, with the Gunners winning 73, losing 62 and drawing 41 times. 530 goals have been shared in those encounters. In the F.A. Cup, Arsenal have won 6, drawn 3 and lost 3 against the Villains. I look back on 5 of the most significant matches between these two sides.

DO YOU REMEMBER THE FIRST TIME?

Probably not! The sides met for the first time a shade over a century ago, on 8th October, 1904, when Arsenal were still known as Woolwich Arsenal. The Gunners won this match 1-0 thanks to a first half goal from the wonderfully named William Henry Gooing. In fact, the names on the Woolwich Arsenal team sheet that day would have the Arsenal Gent soiling his pantaloons. John Dick, Sailor Hunter and Charlie Satterthwaite all featured alongside Gooing.

Unsurprisingly, little is known about the events of this game, other than the date, the score and the goalscorer. The game took place at Woolwich Arsenal’s Manor Ground. It was the Gunners’ first ever season in the top flight, having been promoted from the Second Division in the 1903-04 season (current projection suggests our great grandchildren can look forward to the 2103-04 season with great relish). 7,500 hobnailed boots packed into the Manor Ground terraces for this one, Woolwich Arsenal would eventually finish a respectable 10th, whilst Villa finished 4th but contrived to pick up the F.A. Cup.

Woolwich Arsenal goalkeeper Jimmy Ashcroft was in the middle of a run of 154 consecutive appearances for the club, which was a club record until it was surpassed by Tom Parker in the 1930s.

When 60,000 souls crammed into Villa Park to watch Aston Villa take on Arsenal in December 1935, expectations amongst the home crowd would not have been high. The home side were languishing at the bottom of the table, crashing towards eventual relegation and the visitors had three consecutive league titles under their belt. The Gunners did travel with a few anxieties however, with star man Alex James injured as well as forward Joe Hulme. With injuries to key attackers, Gunners boss George Allison was forced to play Ted Drake, despite the striker carrying a knee injury.

Drake, sporting a heavily bandaged knee, had completed his hat-trick by the 36th minute. After an hour, he had amassed 6 goals with the home side yet to reply. On 70 minutes, Villa’s Jack Palethorpe bagged a consolation. But intent on having the final word, Drake scored his 7th goal in the final minute of the game. The former Southampton striker had a total of 9 shots on goal that afternoon, scoring with seven, hitting the crossbar with another and charitably allowing Villains keeper Harry Morton to save one. Drake’s haul stands to this day as a first division record for goals scored by a single player in a single game.

Drake’s 7 goal salvo was briefly an English professional record, but it survived only a fortnight as Tranmere’s Bunny Bell scored 9 in a match against Oldham Athletic in Division 3 North. Drake’s remains a top flight record, however.

Arsenal did not retain the league in 1935-36, but they did win the F.A. Cup. Aston Villa were relegated.

This game represents the most convincing margin of victory achieved by either side in matches against one another.

One of the more surreal matches between Arsenal and Aston Villa occurred in May, 1981 at Highbury. Villa took over the entire Clock End as their team required a draw to be crowned Division 1 champions for the first time in 71 years. Ron Greenwood’s side led Bobby Robson’s Ipswich Town by four points at the summit of the table, though Ipswich had a game in hand (this in the days of 2 points for a win). For Arsenal’s part, a win would guarantee them third place and qualification for the UEFA Cup.

The nerves obviously told on Villa who were 2-0 down by halftime, thanks to goals from Willie Young and a fine effort on the counter attack by Brian McDermott. But the defeat proved to be inconsequential, as Ipswich tumbled to a surprise defeat at Ayresome Park. The travelling Villa fans poured onto the pitch in celebration, only for the North Bank to join them on the hallowed turf and push them back from whence they came. It remains the only time that a team other than Arsenal has confirmed a league title in N5.

Pele attended the fixture and was presented to the crowd on the pitch before the kickoff.

Arsenal did not lose a single league fixture at Highbury in the 1980-81 season.

On three occasions this fixture has seen a side overturn a 2-0 half time deficit to win 3-2 during Arsene Wenger’s reign. The Gunners have managed the feat twice and Villa once. But in December, 2001 on a gloomy winter afternoon at Highbury, Arsenal harnessed a momentum that would carry them to the domestic ‘double.’ In a historic week, Arsene Wenger had finally ended speculation over his future by signing a new contract and the club secured planning permission to build a new 60,000 seater stadium in Islington.

But the Villains turned the carnival atmosphere positively funereal when a Merson lob and a rasping Steve Stone shot left the Gunners trailing 2-0 at the break. Sylvain Wiltord came off the bench at half time and scored a sumptuous volley with his first touch to set Arsenal on the road to redemption. Henry equalised with 18 minutes remaining, before entering into a fiery contretemps with Steve Staunton as he tried to hug the ball in the goal net. In stoppage time, Henry completed the comeback with a trademark Thierry finish. His reward was to be flattened by Sol Campbell in the resulting celebrations. The bigger picture revealed a bookmark moment in a wonderful campaign when you could just sense that you were watching champions in the making.

Paul Merson became the first player to score for and against Arsenal at Highbury during Arsene Wenger’s reign.

The win put Arsenal within 3 points of first placed Liverpool. The Gunners would go onto win the title by a margin of 7 points, they also won the F.A. Cup.

DO YOU REMEMBER THE FIRST TIME? (Remix)

There’s a much better chance, dear reader, that your memory banks permit recall of this particular first. Aston Villa were the first ever visitors to Emirates Stadium for a competitive match back in August 2006. The bare concrete of the perimeter walls serve as a reminder of the arena’s infancy. Their ugliness puts one in mind of a new born emerging from its mother covered in blood and mucus, its face wrinkled with tears. But nevertheless, it was ours and after a quick sponge bath and a lick of paint, it looked beautiful.

The match however, did not quite go to plan. With Arsenal still finding their feet in unfamiliar surroundings, it really wasn’t a home game at all. Villa took a shock lead on 53 minutes when Olof Mellberg rose to nod McCann’s corner home. The game seemed to be petering out into a meek defeat, but the crowd buzzed into life at the introduction of a fresh faced Theo Walcott, making his Arsenal debut. He played a central role in the equaliser, as his cross was nodded towards Gilberto Silva by van Persie. The Brazilian smashed the ball into the roof of the net to give Arsenal’s historic day a more acceptable sheen.

Gabriel Agbonlahor, Mathieu Flamini and Theo Walcott are the only members of both squads still at their respective clubs.