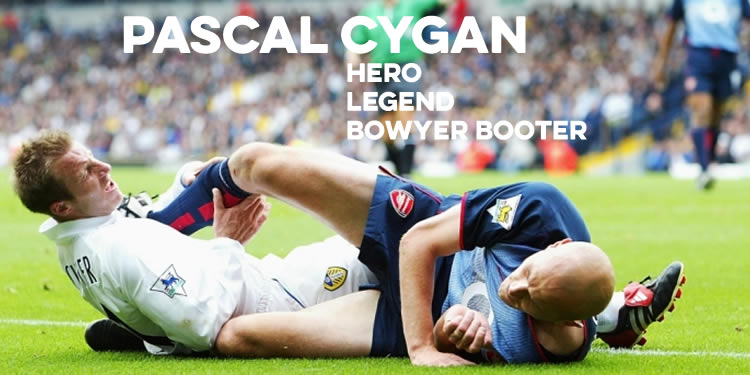 I don’t use Facebook for that much really other than to manage the Arseblog page. I’ve got a lot of ‘friends’ on there but in all honesty I don’t know who 75% of the people are! I don’t really post on it and it’s one of those websites that’s always seemed like a time-sucker to me.

But this morning I logged on to post something about an update to our Android app (which you can get here and it fixes the problem of recent days – thanks @lineten! – iPhone update coming soon), and it told me that today is Pascal Cygan’s birthday. It’s a momentous day in the Cygan household, obviously, as he turns the big four-oh.

He was obviously a player whose reputation didn’t quite match up with some of those around him, but he played his part in that most memorable of seasons when we went unbeaten. Regardless of how boring, boring some are (or aren’t – depending on how sensitive and precious they are that they spend days in the press and social media countering some gentle joshing), nobody’s managed to come close to matching that.

Cygan made 18 Premiership (as it was) appearances that season, starting 10 and coming on as a sub in 8 (1 yellow card). He also was in the team from the start for that epic 5-1 thumping of Inter Milan and I recall him playing really well that night, as most of our boys did. Sure, he wasn’t Sol Campbell or Kolo Toure but he wasn’t Stepanovs or Squillaci either. His left foot wasn’t what you might called ‘cultured’ but it had its moments.

I also remember a game when he absolutely smashed Lee Bowyer in a tackle and I think it’s fair to say that anybody who does that merits some plaudits, even if they come very late after the fact. I found a report of the incident (during a game which Arsenal won 4-1 at Elland Road), which describes it like this:

The match, which had been simmering, had boiled over. It was soured, in particular, by a challenge between Pascal Cygan, the French defender making his full Arsenal debut, and Lee Bowyer.

With Bowyer grounded after a tackle, Cygan appeared to aim a kick at the England international’s chest and chin, but escaped punishment from referee Alan Wiley.

Soured? SOURED? How does that sour a game that we’re winning 4-1? If anything that is the mouth-watering [same-sex] marzipan figurine on the top of the icing on the cake that is already delicious. I also really like the phrase ‘aimed a kick at … the chin’, rather than ‘booted him in the head’. I suppose though, if there is a downside, it would have been that Bowyer, a meek, mild (possibly church-going) individual, had to be exposed to that kind of violence for the first time in his life, but there you go.

But look, let’s not dwell on the negatives, and instead focus on the positives and that’s that Pascal Cygan booted Lee Bowyer in the head. For that alone he deserves recognition on his birthday and possibly a present like an Etch-a-Sketch or a Viewmaster. He never did quite nail down that position in the boardroom though – ah well, there’s still time.

And if you want to relive the memories of that Invincible season, there are a very limited number of the hardbacks left on the Arseblog store here, or if you want get one in person they have some in The Tollington where you can enjoy the book and a beer. What more could you ask for?

Also, in my trawling of the Arseblog archives for Cygan/Bowyer related material, I came across a story which linked us to an Australian player called Jacob Timpano who was playing for the brilliantly named Wollongong Wolves. I was curious to see the trajectory of his career after being pursued as a 17 year old by both us and Real Madrid (apparently).

Turns out he’s now playing for the brilliantly named Dapto Dandaloo Fury FC in New South Wales. In-between he’s turned out for Canberra Rovers, the Tasmanian Rampage, Adelaide ‘Finish him’ Kombat, the Perth Perpetual Piranhas, and the Alice Springs Lonelies. Glad to see all that potential was fully realised.

While Danny Welbeck has spoken about his frustration with not scoring more goals this season. If I had one recommendation for him next season to ease that annoyance it would be this: score more goals. Sometimes we over-think things in football you know, the most simple solution is often the best one.

Right, things to do, people to see, you know how it goes. More from me tomorrow. Until then.