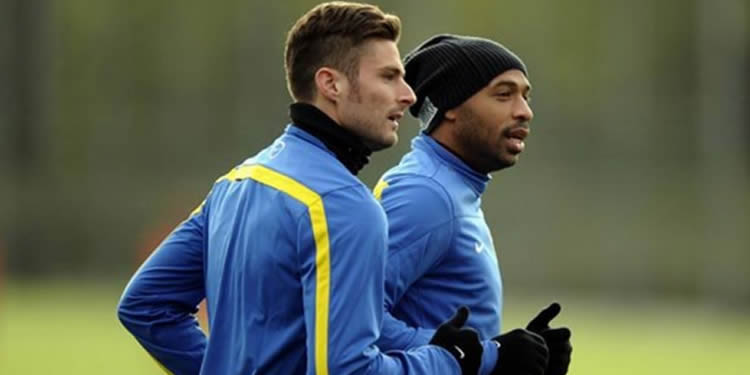 Let’s start with some strange stuff this weekend from Thierry Henry about Olivier Giroud. On Sky Sports after the Chelsea game he said that his fellow Frenchman ‘does a job but you can’t win the league with him’.

It struck me as particularly pointed and I don’t think it stands up to any real scrutiny. He’s got 14 goals from 17 starts + 5 sub appearances in the Premier League, Champions League and FA Cup. A total of 1551 minutes playing time which gives him a goal every 110 minutes.

Now, somebody who will win the league is Diego Costa who has got 19 goals from 23 starts (1 sub appearance) and a total of 1960 minutes – that’s a goal every 103 minutes. Would you say that Costa is a player who you can’t win the league with? I don’t think so. Is there much between them statistically? Not really, especially when you consider that Costa didn’t spend 3 months out with a broken leg and their season totals in all competitions of 18 (Giroud) and 20 (Costa) are much closer.

Maybe he means that Giroud is a player who won’t win you the league single-handedly, but as far as I can see there are only two players in world football who could possibly do that for a team – Lionel Messi and Cristiano Ronaldo, and even they need help. Some might suggest Luis Suarez is one of those players but as brilliantly effective as he was for Liverpool last season they still fell short.

Plus the idea of being so reliant on one player is unhealthy really. When Henry was in his Arsenal pomp he still had goalscoring support from Robert Pires, Dennis Bergkamp, Freddie Ljungberg, Sylvain Wiltord and others. There was a time quite recently when we were far too dependent on one striker for our goals, and while some of what Robin van Persie did was fantastic, you couldn’t possibly extol the virtues of us as a team when he was doing it.

Maybe he’s referring to the fact that Giroud couldn’t score against Chelsea, which again feels like an odd point to make given that he’s scored against Man City, Man Utd and Liverpool this season. Also, Sergio Aguero, a striker you can certainly win the league with, has also failed to score against Mourinho’s team this season.

I mean, if anyone thinks the reason we’re not challenging for the title this season is Olivier Giroud then they haven’t been playing close enough attention. Issues with the balance of the squad, the team’s formation, injuries at the back, failure to recruit fully defensively in the summer, lack of midfield protection and indifferent form from certain players are the reasons we dropped so many points at the start of the year.

It’s those points – the ones you lose drawing with lower/mid-table teams like Leicester, Hull and Sp*rs – that see us so far off the pace. And the other thing to bear in mind is that we went into those games without Giroud who was sidelined with a broken leg. Since his return he’s played a big role in our recent form. Obviously there have been other factors too, but his run of goalscoring, and his contribution to the team’s playing style, has been a major part of why we’ve been winning so often lately. You can’t help but wonder if we might have had a few more points on the board if he hadn’t suffered that freak injury at Goodison.

Of course this is the part when we have to qualify everything by pointing out that he does have some flaws in his game, but then so do most players. Alexis Sanchez has been a huge favourite this season, a candidate for player of the year, but he’s got some issues with his game that can be improved – his use of the ball and his passing could certainly be better, for example.

So, when it comes to top level strikers, while there are some that are better than Giroud, there aren’t too many, and right now Arsenal would be a much less competitive team without him. All in all, it’s weird stuff from Henry because he’s a man who is around the club quite a bit because of his past. He’s trained with the team, he does coaching badges, and this kind of weirdly misplaced criticism of one individual is bound to make things a bit awkward.

I get that he’s got to earn his Sky Sports punditry dough, and that means make headlines. If he truly believes that about Giroud, that he’s a hindrance to us winning the league, fair enough, but I don’t understand how he could look at what he’s done this season in the context of all our issues and draw that conclusion. I’d be worried if that’s what he considered the main problem.

I think you can win the league with Giroud. When you’ve got Ozil, Alexis, Cazorla, Ramsey and others around him, you give yourself a great chance. Maybe you need more goalscoring from players slightly on the fringe like Welbeck, Wilshere, Oxlade-Chamberlain and Walcott – maybe that’s where you need to improve to make yourself more competitive. Not to mention the fact you need your defence and midfield to function the way it is now from the very first game of the season

And look, if there’s a better striker than Giroud out there that you can get, then you get him, that’s true of every player in ever position. But to almost pin the failure to compete on one man is odd stuff from Henry – particularly when if you really had to choose one man as the reason why things didn’t go as well as we’d have liked this season, it could only be Arsene Wenger.

Meanwhile, you might have noticed a few site issues over the last 24 hours. We are working on them. Some issues with our Feedburner feed means that the Android app won’t be functioning the way it should. We’re investigating and hoping to find a fix ASAP, but in the meantime please just use Chrome or whatever browser you like to visit. The site is optimised for mobile so it’s all good in that regard.

Also, if you haven’t yet had a chance to listen to yesterday’s Arsecast Extra, check it out here as we discuss the Chelsea game, Arsenal fans singing songs that seem to upset a lot of overly-sensitive people, and loads more.