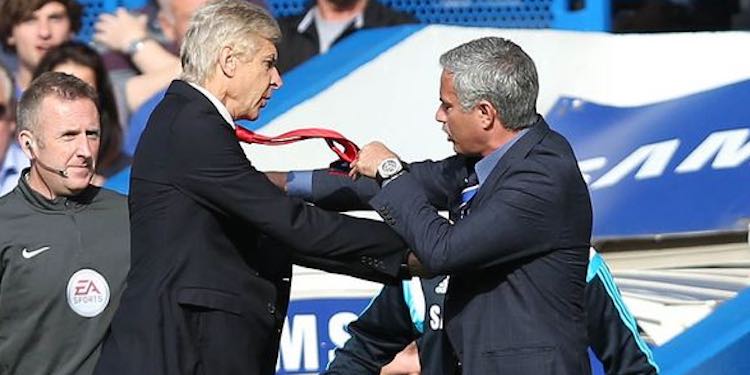 Morning to you. There’s a delicateness to my head which can only be cured by coffee and pork related products. I must make this happen.

There are some headlines about Jose Mourinho ‘hitting back’ at Arsene Wenger over something the manager said about defending being easy. The Chelsea manager made some kind of vaguely snide comment about how if defending was easy we wouldn’t have lost 3-1 to Monaco and I suppose we’re all meant to go crazy about this, but if this is the extent of the pre-game sniping then there’s not much to get upset about.

Yeah, we lost a game which we shouldn’t have by playing poorly but I don’t have any context for Arsene’s quote so I don’t really know how it was presented. My best guess is that when Mourinho held his pre-game press conference it was put to him in a way that provoke a reaction and didn’t include all the complimentary things he said about Chelsea’s season and their position at the top of the table.

Nobody has given Chelsea the points. They had to fight for it and they made it.

They are the team that have lost less games than any other team so the Premier League rewards the consistency and on that front, they have been defensively very strong and very consistent.

Of course it wouldn’t make for much in the way of a story if they said that Wenger had acknowledged that they’ve been the most consistent side in the league this season. And lest anyone think that this is some kind of Chelsea love-in, it should be noted, for the record, that they are worse than war criminals who put pineapple on pizza, just for balance, obviously.

As I mentioned yesterday the media would love another coming together of the two managers, and in an interview with Sky Sports Olivier Giroud spoke about the touchline incident at Stamford Bridge earlier in the season when Arsene reacted to a shocking Gary Cahill challenge on Alexis:

He’s got good self-control but we were a bit surprised by his reaction. But it’s a human reaction and I’m well placed to speak about that because I’m an emotional player. I don’t keep my feelings for me and that’s why sometimes it happens.

Honestly, from my point of view I was more proud of that. It shows his character and if he has done that maybe it was justified.

If this was a Facebook status update or an Instagram post I would LIKE the shit out of it. I recall criticism of him for the way he got involved with Mourinho at that time, but it’s a manager pushing one of history’s greatest monsters after one of his stormtroopers got away with a tackle that could have snapped Alexis’ leg. What’s the problem?

Obviously it would be better if there was no repeat tomorrow – from the very basic perspective that it means one of those wankers in blue hasn’t gone in studs up and over the ball on one of our players – but if it had to happen again I’d back our manager 100%. I’m not saying that the Premier League needs to see Jose Mourinho taken out with a blunderbuss, only that if it happens there’s probably a very good reason for it.

Meanwhile, ticket prices for the FA Cup final have been announced and there’s been an increase on last season. The 25,000 allocation has been confirmed and that will obviously leave a large swathe of the Arsenal season ticket population unhappy after the ballot.

The fact that we’re wearing yellow is also now 100% and I have to say I love that. I know that the last few times we’ve worn yellow in a final it hasn’t gone as well as we might have liked, but what makes it easy to deal with is the fact that what colour shirts we had on had absolutely no bearing on what happened in those games.

Kick-off time is 5.30 which, as we all know, is goddam stupid and supposed to suit the people who are going to watch on TV. Every year the FA do more to diminish a great competition and having the game kick off so late in the evening is part of that when a good old fashioned 3pm would suit everybody just as well. It’s a Saturday, it’s not like you have to schedule it for people coming home from work. Still, the really expensive consultants they hired probably suggested this was the ‘optimum schedule’ or something so they’ve gone with that.

Right, that’s just about that. Today is the traditional Arseblog 5-a-side tournament, a majestic showcase of football and certainly not an event where really hungover people wish they’d been a little more abstemious the night before. It’s a rum-powered display of scintillating attacking, creative midfield play, no-nonsense defending and, perhaps, a little bit of vomiting on the side of the pitch.

Up the Greens! Till tomorrow.