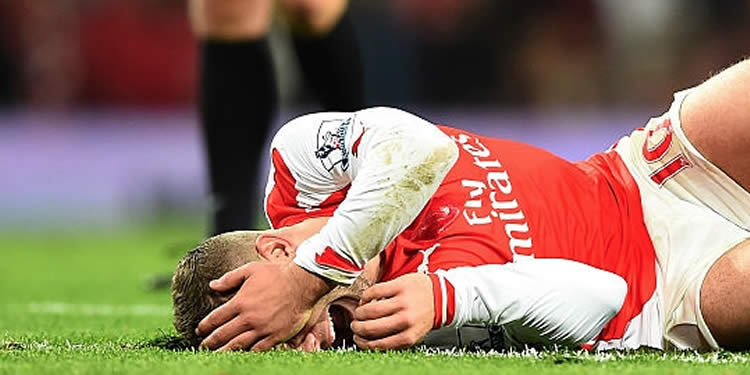 It is difficult to look at Arsenal’s record before and after the home loss to Manchester United and not be filled with some combination of regret, rue and rage. Before it, Arsenal had played 18, won 7, drawn 7 and lost 4. Since then, they have played 26, won 21, drawn 1 and lost 4. The start to the season stings, especially now as things are becoming that bit closer at the very top of the table.

The three main causes of the struggles were fairly clear: injuries, cover in defence and, most of all, the system. Most of the players seemed ill-suited to the 4-1-4-1, almost everyone was struggling. In that setup before that United game, Arsenal won just 2 in 8, and the first of the two was Crystal Palace at home, where the winning goal came in injury time after a shift to 4-2-3-1. Not to mention Mathieu Debuchy, Laurent Koscielny, Olivier Giroud, Mesut Ozil and too often Aaron Ramsey spending time injured.

Injuries were still plentiful after the United loss – in fact, more so because of it – but things began to change, most visibly in Santi Cazorla. He looked as he had not done since his first season. Still mostly in the 4-1-4-1, but now in the deeper role, he was excelling. At the same time, while Aaron Ramsey was less slick and more  functional than he had been in 13/14 when, alongside Cazorla, he seemed to be far more aware of what he role in the team.

After Ozil’s injury, Arsène attempted a few variations with the system: the 4-1-4-1 had not worked to this point, so he shifted to something more like a 4-2-3-1 with Alexis Sanchez in the central role off the main striker, making it something like Manchester City’s 4-2-2-2. Alexis flourished, but few others did; Ramsey especially struggled with the huge amount of extra space to deal with, the wingers were more cut off from the rest of the team and the defensive protection was something like a swinging door.

From there they went back to 4-1-4-1, yet now the balance was far better, which showed in the results. The  returns of Giroud and later Koscielny were a big help, but the new balance in midfield proved similarly important. With Ramsey and Cazorla still in roles that were fairly new to them, their respective intelligence on and off the ball, as well as their complementary characteristics, were the defining factors in making their partnership successful.

One of the big advantages of the 4-1-4-1, in theory, was to give Jack Wilshere a run in a central position. In the 4-2-3-1, the signing of Mesut Ozil had pushed him to third choice for the number 10 position (possibly fourth now); Ramsey’s brilliance and Wilshere’s own post-2011 struggles in the role made him firmly backup for box-to-box, and the plethora of wingers meant his chances there would remain limited there.

When Ozil returned, within a few games, it was 4-2-3-1 again. For the players Arsenal have, it is the ideal setup. It places Ozil and Ramsey in their best positions, who in turn feed their comfort back into the rest of the team, enhancing the collective unit. It provides the appropriate support for the defensive midfielder and hence protection for the defence, and keeps players close enough to lone striker so they do not get isolated.

But where does that leave Wilshere? For now, as Ramsey’s box to box role backup, but there is a case that Cazorla too has proved himself preferable in the position, at least in the short term. He lacks some of the robustness ordinarily associated with the role but his wisdom with and without the ball remains streets ahead of Wilshere’s.

Wilshere’s most encouraging set of performances for Arsenal this side of 2012 have mostly been on the wings, in the impressive early season run of 13/14 (City at home excepted). It took injuries to Cazorla, Alex Oxlade-Chamberlain and Theo Walcott to give him the opportunities there, and now there’s Alexis and Danny Welbeck, too. Though, with Cazorla aging and the perpetual need for balance, it is not impossible, but quite unlikely, that he could find his home on the right wing as an advanced ball-player.

The vainest hope still (against all logic, reason and evidence) exists that he could perhaps take on the role of defensive midfielder. His vision and passing range in the deepest midfield position could be something glorious, but his positioning, tracking and all-round defensive play in that position would be an outright disaster. Banking on him learning the intricacies of such a role when he is so far from it now feels deeply far-fetched.

The English National Team negated that issue somewhat by setting up in a 4-3-1-2, with two energetic, tackling-prone midfielders ahead of Wilshere acting as his protection. Wilshere was sublime, though it has only been tested against extremely poor calibre teams, and even then they could not completely protect his lax defending. Within the current Arsenal squad, only Ramsey could act as one of those ‘shuttler’ midfielders; recruiting another would certainly be easier than finding the complete Mikel Arteta replacement, but there is an issue of whether it would actually be beneficial.

It could be the best way to integrate Wilshere into the Arsenal first eleven, but would it improve on the current structure? It is also possible that he could become one of those advanced central midfielders, with a different player behind him, though it is probably the less likely outcome.

The biggest concern for Wilshere is that every criticism and fear that was evident in 2012 is still there now. Injuries, of course, have been a major issue, but since the beginning of last season, he has started 41 games, featuring in 51 overall. Long standing knocks of course have their bearing but there is only so far an injured ankle can go to explaining why he has not learned to stand in the right place, track his runners, or why he still overplays the ball on so many attacks.

Wilshere is an exceptional talent, and exceptional talent can sometimes require provisions and protection. The brilliant specialist is far preferable to the mediocre all-rounder. But he’s far from the only one in the squad with that kind of ability. In the box-to-box position, his only hope is to top one of the best all-round midfielders in the game. Hopes of displacing Ozil for number 10 are fanciful at best.

Even in the 4-1-4-1, a setup that seemed to be created with him in mind, he is not in the best eleven. Short of ripping up the functioning structures in place to accommodate him, it is extremely difficult to say what will actually happen to Wilshere.

As has always been the case, the ability is all there, but Arsenal can only wait for so long for the rest of him to catch up.