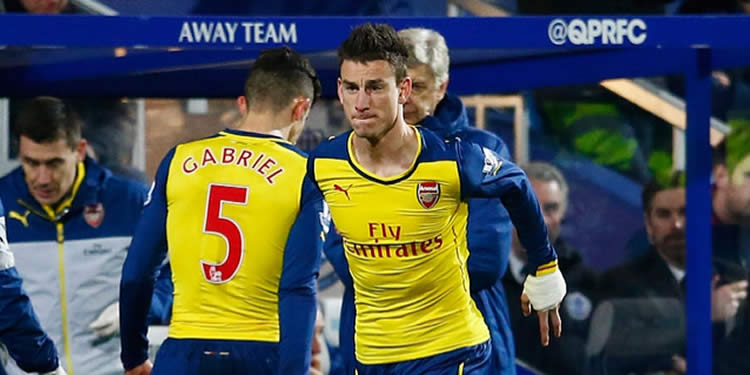 Morning all, and welcome to the Interlull.

It does feel like a particularly unwelcome one given the momentum we have going right now, but on the other hand it may give a few of them some time to rest and recuperate. Francis Coquelin has done enough to become an integral part of this team but not so much that he’s away on international duty.

This break gives him a couple of weeks to get some energy back into legs which looked a bit heavy against Newcastle and, of course, allows his battered nose to heal. Per Mertesacker will stay behind also, a timely break for the man who has played most Premier League minutes for us this season.

It was interesting to note that for the Arsecast Extra yesterday there were a number of questions as to whether or not Gabriel should take his place permanently after the Brazilian’s excellent display at St James’ Park. It’s something we answer in detail on the podcast itself, but it strikes me that people do get a bit short-sighted when a new player comes in and does well.

It’s as if you should only use that new player and forget about the rest. The reality is that despite Mertesacker being in the spotlight for some of our early season defensive issues, the problems went much deeper than that. Yes, he struggled for form without much pre-season, but it had more to do with the fact we didn’t have the right balance in defence because the squad was lacking a player (one we’ve since bought).

Injuries to Debuchy and Koscielny meant we had nobody of sufficient quality/experience to partner him in the centre of the defence. Chambers was raw, Monreal did better than people give him credit for and I do think it’s a factor in his overall form this season since his return to left back, but it was far from ideal. We were completely imbalanced.

Now, having Gabriel in the squad means we’ve got three central defenders who all look like they can play together. It’s early days with the former Villarreal man, obviously, but he’s started with Koscielny and with Mertesacker (although it’s hard to make any judgement on that partnership because he went off with an injury after about half an hour), so it looks as if the manager is comfortable deploying different partnerships.

It means, should we choose to be that flexible, we might tailor our central defensive selection to particular opponents. A Mertesacker + Kos/Gabriel partnership is the more traditional, with players who complement each other in terms of their basic qualities. The German’s reading of the game allied with a quick, aggressive partner who can attack the ball higher up the pitch.

A Koscielny + Gabriel selection might allow us to play a higher line with a back four that’s not going to be short of pace. If you add Bellerin + one of the left backs, that’s pretty speedy, and might work well against particular opposition.

So, for me, seeing Gabriel have a fine performance in difficult conditions on Saturday is a really positive thing because it makes me more comfortable than we can cope with defensive absences and injuries more readily. It might allow us to develop Calum Chambers at centre-half more slowly too, because I think that’s his most likely position over the next couple of seasons.

I don’t think he’s been as bad as some suggested at right back, but with Debuchy on the way back and hopefully remaining injury free, plus the emergence of Bellerin, I think that’s going to be our one-two in that position. The Frenchman could well be fit and ready for the Liverpool game on the far side of the Interlull and as well as the young Spaniard has done, when you get to this part of the season managers are more inclined to go with experience.

I don’t think he’s got any fear of playing Bellerin, but when Debuchy is fit again he’ll come back into the team. It means that Chambers chances in that position will be few and far between, bar unfortunate circumstances, so maybe now’s a good time to work with him on the training ground and see him learn more about the central defensive role.

Again, there’s some real short-termism going on with Chambers. Everyone was highly enthused and excited by his early season form, but as time went on and he founds things difficult, there hasn’t really been the understanding that this is a young guy in his first season of playing regularly in the Arsenal first team and the learning curve is very, very steep. It was natural that he was going to find it tough at some point, but I think the underlying quality is there for him to respond well and find his form again.

One of the reasons we found ourselves with an injury crisis was the fact we didn’t have enough depth, and it now looks as if we’ve got the right amount of personnel for each position. It’s down to them as individuals to change the pecking order with their performances, but it’s still so odd to hear people dismiss and write off players because of one or two good displays by a new boy. The way of the world I guess.

Anyway, not a lot else happening other than for me to reference the podcast again and say thanks to everyone for downloading/listening. So far in 2015 alone we’ve had over 1,200,000 downloads which is amazing in that short space of time and very much appreciated.

If you haven’t already listened to this week’s Arsecast Extra you can check it out right here – and if you’ve never listened to a podcast in your life, why not start now? It’s the future, except it’s now. Or something. Go on, give it a try, you might just enjoy it!

Right, more from me tomorrow. Have a good one.