When Danny Welbeck pounced on Antonio Valencia’s errant pass midway through the second-half and slotted into an empty net, it hit home just how much Manchester United v Arsenal has changed over the years. For one, the match-winner has swapped sides, but it was the frequency with which the ball was lost which was a reminder that these teams are still rebuilding following their sudden descent from the top.

The FA Cup represented both sides best hopes of silverware this season, and that apprehension showed as possession was regularly turned over. When Valencia’s back-pass failed to reach the goalkeeper and found Welbeck instead, it only confirmed that these two teams don’t trade in the high-class, high-stakes encounters anymore.

Yet Arsenal’s 2-1 victory on Monday night was far from the predictable, one-sided encounters it has recently been. Yes, the game was a bit sloppy at times, but that was not necessarily a bad thing because it showed that both teams were committed to a certain philosophy, and tried to continue playing under pressure, so as such, errant passes were to be expected. The two first-half goals summed up the different approaches of these two ball-playing sides.

Arsenal took the lead through Nacho Monreal, a fantastic team move which started with Alexis Sanchez coming inside and then Mesut Ozil taking up his position out wide. The ball then rapidly worked its way up the left-flank, with Santi Cazorla, Monreal and Ozil trading passes before the latter switched the ball out to the other side. Alex-Oxlade Chamberlain’s quick feet made the goal, going past three challenges before finding Monreal who showed calmness to slot past David de Gea at the near post. (In between, Antonio Valencia inexplicably followed Alexis all the way inside, creating the space for Monreal to run into).

The move was one Arsenal routinely practice on the training ground. It’s perfected by a drill called “play-throughs” whereby the team lines as it would normally on a match day but without opponents, so that the players can memorise where team-mates are intuitively. The ball is played from back to front – from goalkeeper to striker – with the aim looking to create triangles and moments of overloads – 2v1s, 3v2s – before a diagonal switch to the full-back or winger, as Arsenal did for the opening goal – twice actually, when Alex Oxlade-Chamberlain joined the move and Monreal provided the penetrative run.

Manchester United, though, pegged Arsenal back instantly and probably deserved to go to half-time level as they were the dominant team. Their way of playing, or perhaps more appropriately, Louis van Gaal’s, is more textbook, following the Dutch school of thought whereby it’s all about making the pitch as wide as possible to create triangles across the pitch. Where Louis van Gaal has refined it is that patience, rather than penetration is preached, with the ball expected to be moved from side to side so that the space eventually opens.

Against Arsenal, though, Van Gaal added an extra dimension to his teams’ attacks: the long ball. This wasn’t just route-one stuff – though in the second-half it became increasingly so – because van Gaal only wanted to execute the switch once his team had committed Arsenal to one side. When the ball was played to the flank, normally to Angel Di Maria, he would then whip it to the back post to either Marouane Fellaini or Wayne Rooney.

Indeed, this ball was always on in the first-half and it was Manchester United’s main source of threat. It didn’t help that Alexis Sanchez, defending on that side, was frequently drawn to the centre to try and press up the pitch, leaving Monreal often one v one with Di Maria. The full-back, though, coped well and was strong in the challenges. And when the ball did get into the box, Per Mertesacker and Laurent Koscielny, stuck tight to their strikers. Still, they couldn’t stop United from scoring from that way, with Wayne Rooney heading in Di Maria’s whipped cross almost instantly after Arsenal had taken the lead. 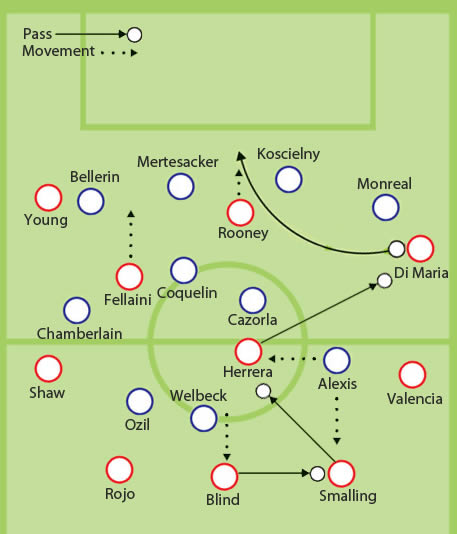 The first-half generally carried on this manner. It was frantic with Arsenal trying to press Manchester United early on in the build-up and then, when the ball was played into midfield, drop back into a compact shape. The way Manchester United stretched the pitch made it difficult for Arsenal to be really effective in winning the ball back although it soon proved to be a double-edged sword because whenever the ball was played backwards, Arsenal pounced.

In particular, The Gunners took advantage of the sloppiness of Antonio Valencia and Chris Smalling, with much of their openings coming down their side. Perhaps that’s why Louis van Gaal made the changes at half-time: Arsenal were constantly looking to attack on the left-hand side, so he switched the vulnerable Smalling to the other side of the defence.

His other change was to take off Ander Herrera and bring on Michael Carrick, therefore switching the formation from 4-1-4-1 to 4-2-3-1. That proceeded to have a stifling effect on the side because suddenly they weren’t as effective in stretching the pitch. With Daley Blind as the sole holder in the first-half, United could morph their formation into a back three or five across the middle, depending on where Blind went.

Suddenly in the second-half, with nobody dropping into the back four, the defenders weren’t required to shuffle across the pitch and stretch the play, so instead they resorted to hitting high-balls forward because the midfielders were marked. The change gave more freedom for Fellaini to get forward, though he was often wasteful whilst Francis Coquelin, playing in the jailor role, stuck to him fantastically all game.

Overall, the game proved to be an intriguing example of how two sides noted for their treatment of the ball, can be so different. What the match showed is that possession football is diverse – as diverse as the game itself (because after all, everybody passes the ball) – and that there is no such thing as a single, homogeneous style of build-up play.