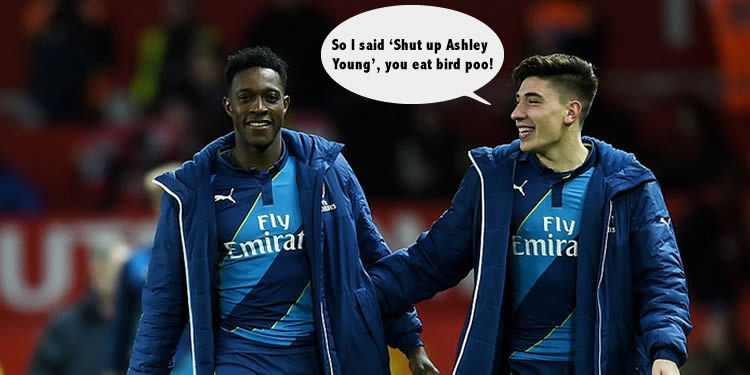 Morning all. I hope you’re still basking in the warm glow of Monday night. Sure, the moment has passed but it still feels good.

That we’ve managed to put an end to such an atrocious record at Old Trafford is a lovely consequence of reaching the FA Cup semi-finals. After so many games without a win, it becomes a thing for the team to have to deal with every time they go there. The players change, the results remain the same, and it feels like a thorn in the side ahead of every fixture there – not to mention the fact it contributes to the poor away record against big teams.

If not quite a millstone, it was certainly something else to contend with on top of the fact you have to go and play top class opposition at their place. Beating both Mans in Man should help this team feel a bit more confident when these games come up again.

After the game there was some interesting stuff from Danny Welbeck by Per Mertesacker, who said:

Danny Welbeck was a great player here at United, he’s a bit quiet in the dressing room at the moment. I think it hurts him a bit as well as he was here for a long time. We tried to get him going and to tell him he can enjoy special moments with Arsenal.

While Welbeck himself admitted it was tough:

It was hard for me but I tried to be respectful. I stayed professional and I was just doing my job. To be able to get back on the scoresheet and get through to the next round is the most important thing.

He must have been a player going through some moments of self-doubt ahead of this game. Without a goal since Dec 28th against West Ham, he’d been sidelined through injury and seen Olivier Giroud come back into the side, score goals and (Monaco aside), play as well as he has done in his time at the club.

That meant Welbeck would have to compete for a place in the side in a wide position rather than the centre-forward position he really wants. His versatility is a bonus for us, but there’s also the fact that Giroud can only ever be played as a centre-forward. Welbeck has been deployed left and right of the main striker.

I think we all know that as well as trying to get the best out of a group of players, a manager’s job is also to inspire and motivate individuals. He can do that on the training ground, in private conversations, by talking about their quality in a press conference to give them a boost etc, but what a fillip it must have been for Welbeck to get the nod on Monday night.

Chosen ahead of the in-form striker with 9 goals in 14 games he was asked to do a difficult job against his old team, but it was a show of faith in him from Arsene Wenger. But let’s not pretend it was just designed to make Welbeck feel better, it was also something of a test. The manager wanted him to produce, he needed him to produce, because that’s what the team required.

Not necessarily a sink or swim situation, but one, if it worked, would benefit both the team and the player. The net result of Monday night is obviously an FA Cup semi-final, but I do wonder if it will act as a battery charge for Welbeck’s season.

Not only that, I guess it’s also a way of maintaining the competitive environment that seems to be a factor right now. Last season Giroud knew that he was the only striker at the club worth talking about. I’m not saying that meant he didn’t try hard, but knowing there’s another player itching to take your place goes a long way to keep you on your toes. He was very publicly backed by the manager after his Monaco performance, scored two in two, then found himself dropped to the bench for a massive game against Man United.

If it was a way of getting more from Welbeck, it was also a way of reminding the HFB that he’ll have to keep up a high level of performance and end product if he wants to play. The same goes in other positions too. Nacho Monreal came in for Kieran Gibbs who had played well in the previous games, and stormed it at Old Trafford. The goal was a very obvious tangible from his performance, but his overall display was excellent too.

I also wonder if there’s some of this method in the decision not to use Theo Walcott over the last few games. I think the circumstances of those fixtures have played a part – not even Theo’s biggest fans would suggest he’s the right guy to bring on when you’re trying to hang on to a 2-1 lead. But maybe that’s what he needs to do if he really wants to play. If he’s unhappy at not being selected, isn’t it down to him to be a player who can be relied on those circumstances?

The depth of the squad in the forward positions means that we have the ability to tailor the line-up, starting and and in-game, to best suit what’s going on. If you’re a player who can only contribute in a certain way, then that lessens your chances of playing as often as you might like. Should the team change to accommodate individuals, or should those individuals try and modify and improve themselves to suit the team?

Anyway, it’s something to consider and how the manager changes things around for this weekend’s game with West Ham will be interesting.

Right, if you didn’t get a chance to listen yesterday, you can continue to enjoy Monday night’s win with James and I in the Arsecast Extra – and if you haven’t checked out the sponsor yet, deskbeers.com, please do. It’s beer delivered to desk and you get 10% off your first order by using the code ARSECAST10 (UK mainland only for now). Click here to visit Desk Beers.