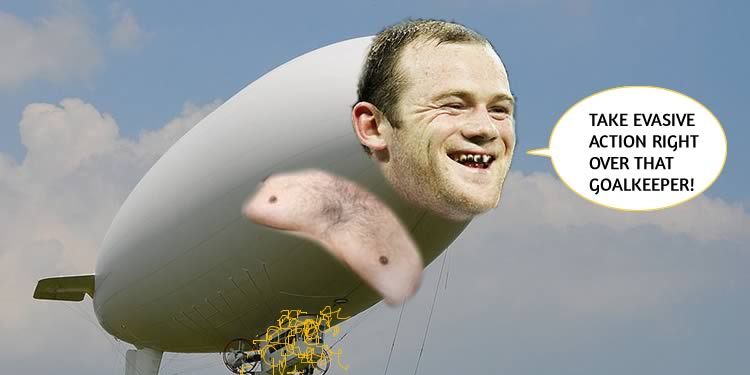 I guess we’ll start with the draw for the quarter-finals of the FA Cup and we’ve got a trip to Old Trafford as the next step on our road to defending the trophy. They beat Preston last night thanks to some outrageous cheating and inept officiating.

For the first goal Wayne Rooney was offside and interfering with play; for the second Marouane Fellaini got the defender around the neck, choked him to the point of suffocation then pushed his limp body to the floor like a wise guy rolling a body out of the trunk of a car before lashing the ball into the net; and for the third, Rooney showed all his experience and guile to win a penalty.

Or, to put it another way, he dived like Divey McPlunge, leaping over the Preston keeper like a salmon who has just swindled an old couple out of their retirement fund by making them invest in a time-share which doesn’t exist – a deal which will so emotionally affect those nice old people that their health will dwindle and within the year both of them will be dead. One from the stress, the other, literally, from a broken heart ruing the day they ever met that salmon and allowed themselves to be talked into spending the money that they were going to use to ensure their retirement, after years of honest, hard work in a job which served the community, was a carefree one with nice things to eat and not dinner after dinner of cheap noodles and occasionally some grey meat with a rainbow sheen because that’s all they could afford.

It’s ok though, don’t feel sorry for the old couple. The salmon was merely making ‘evasive action’. That’s all right then. Silly old people should have got out of the way.

It’s not the first time Rooney has dived, of course. There have been many such incidents throughout his career, a number of them against us even. I suppose we should try and be understanding. When you have a torso so corpulent, so dense that it’s like dark matter, then legs are going to have a hard time supporting it. From time to time they’ll simply give in and I guess that such occasions coincide with being in the penalty area, or leaping over someone’s leg or a goalkeeper, is merely coincidence.

Or, to put it another way, Rooney is a master-diver with a history of blatant cheating and I know people will read this and say ‘Oh what about Pires?’ or ‘Remember that time Eduardo dived?’ and the point is those people need to be quiet and give up the whataboutery because this isn’t about a single incident which people try and use to define the careers of two players (who aren’t English or anything). It’s about Rooney being a serial cheat and the whitewashing it gets from many sections of the press who don’t want to risk the wrath of the FA or whatever cosy relationship they think they have with a millionaire who doesn’t give a shit about them one way or the other.

They’ve won the last two FA Cup ties between us too, a 2-0 and a 4-0, but it feels like we might be in better shape going there this time. For a start we have better players. I don’t envisage their being too much in the way of rotation, unleash the big guns on them. Start Alexis, Welbeck, Giroud, Walcott, Ozil, Cazorla and Akpom too, fuck it. 3-0-7 all the way.

The game takes place the weekend beginning March 6th, and we’re now heading into a period where we’re playing midweek football too with some Champions League and Premier League action. They don’t have Europe to contend with, but we shouldn’t view that as a distraction, merely a chance to build more momentum.

So, while I’d have preferred an easier draw, I don’t have any real fear going there. Not the way we’re playing and not with the squad we have. The only thing that does concern me is that Fellaini might garotte one of our important players before elbowing him in the throat and kerb-stomping him like in American History X (all without being spotted by the referee), before Rooney sails through the air like some kind of pube-transplant recipient blimp to win them a penalty in the last minute, but there’s little we can do about that because it won’t ever be his fault.

I’m definitely looking forward to this one. The magic of the cup and all that.

Meanwhile, some interesting stuff from Kieran Gibbs on how they’re getting new boy Gabriel up to speed with the defensive lingo:

He doesn’t speak any English at the moment and it was the same with Alexis when he came. It won’t take him long. We’ve brushed him up on a few of the sayings for him to get used to. In training and stuff in the week, Steve Bould goes through it with him with one of the Spanish boys, who then translates what it means in English so he understands when it is said to him on the pitch.

There didn’t seem to be any communication issues on Sunday against Boro, although that’s partly due to them being little threat. Still, we can see he understands the language of football very well by the way he propelled that opposition forward into the air. I don’t know what the Portuguese for ‘Have a bit of that you cock-knocker’ is, but I’m sure they’ll figure it out in time.

Right, that’s just about that. If you haven’t yet had a listen to this week’s Arsecast Extra in which we go over the Boro game, some great individual performances and loads more, you can check it out here.

Man Utd preview: Will Emery go for it at Old Trafford?