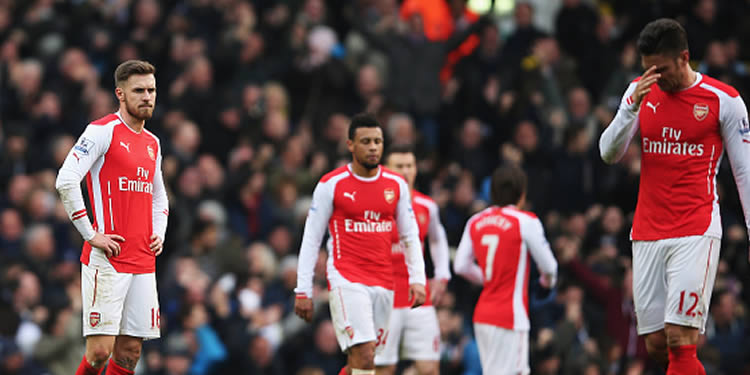 All in all a pretty unpleasant day on which we played poorly and conceded two silly goals to this season’s Michael Ricketts.

There was a change in the starting line-up with Danny Welbeck chosen ahead of Theo Walcott on the right hand side. It wasn’t a shock that the manager felt this particular game wasn’t one in which Theo would start, but choosing Welbeck over Rosicky was a little bit of a surprise.

Still, it started reasonably well. After lots of Sp*rs possession, Welbeck burst past the pudgy, obnoxious, Teflon-coated, diver they have at left back and squared the ball for Giroud. His first time effort was completely miscued but Ozil was there to tuck it away on the volley and put us 1-0 up. Quite the finish. It was against the run of play, for sure, but that’s often the way it goes. We’ve been there ourselves many times.

It quickly became obvious, however, that we had problems and couldn’t sort them out. What made the system work so well against Man City was our ball retention in tight areas. Keeping hold of it allowed us not only to ease the pressure, but to trouble them at the back as we drove forward. Our inability to maintain possession for any period yesterday meant that there was little relief from the waves of Sp*rs attacks, but also that our attacking players just couldn’t get into the game.

David Ospina was a busy man, making a number of very good saves, but his kicking was off – possibly because of the early knock he picked up. We did win some headers, but very little of the second ball, which meant they just came back at us over and over again. Still, despite the fact they played well and we played badly, having gone 1-0 up it smarts not come away from there without at least a point.

Both goals were thoroughly avoidable. For the first, Kane ghosts in behind Ramsey at the back post from a corner. As the image illustrates, the Welshman isn’t aware of Kane and when Ospina palms the ball away, he reacts quickest to slot home. It shows how just one lapse of concentration can prove costly because they had a load of other corners which we dealt with very effectively. 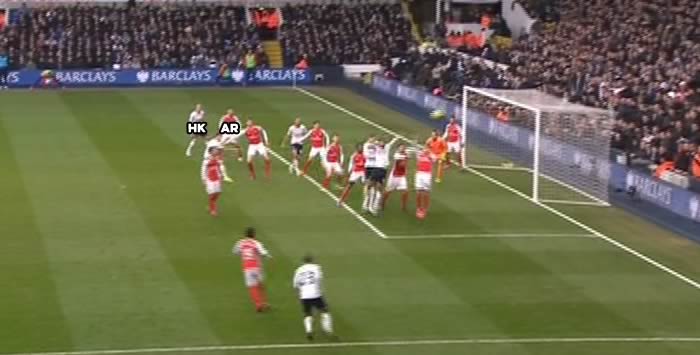 As for the second, what’s improved our defensive record over the last month is the aggressive, switched-on nature throughout the side. If there’s a tackle to be made, or an opponent to be closed down, we did that. That wasn’t the case when Rose simply threw the ball to an unmarked Benteleb.

Theo Walcott is too deep to start with and simply doesn’t react. He stands watching. Olivier Giroud too could possibly have moved across while Coquelin is naturally going to stay deep but with nobody putting pressure on the Sp*rs player he might have pushed out. We stood off, allowed the cross to come in, and Kane out-jumped Koscielny to score a very good header.

There’s certainly questions to be asked of the centre-half, but the bigger issue is allowing Benteleb all the time and space in the world to deliver the ball into our area. If you let that happen you’re asking for trouble and that’s exactly what we got. We heard after the Man City game about how we closed down the ‘supply lines’ – yesterday we opened them up and waved them through. That’s the difference.

Given the way the game had gone there was little chance of us getting an equaliser, although Walcott should really have done a lot better with an excellent Rosicky pass late on.

They were cheap goals. I believe that we made too many technical mistakes compared to our usual level, because of Tottenham in the middle of the park. They put us under pressure and we lost some balls we are not used to losing. It leaves us with a big disappointment to swallow first and then to prepare for the next game.

Losing a derby is never any fun, less so when you’ve played badly, but even with our poor performance we shouldn’t have lost this from the position we’d put ourselves in. I suppose the biggest gripe is that we just weren’t able to do anything the issues we had in-game.

I saw lots of people wonder why Aaron Ramsey stayed on for 90 minutes, and I’d be the first to say he didn’t have a good game yesterday, but what was the alternative? In a game in which you need to keep possession I don’t think Mathieu Flamini is the answer and he was the only other midfielder on the bench after we’d replaced Cazorla with Rosicky. I think you need a player like Ramsey in the midfield, and the issue wasn’t his effort or work rate, he just had a bad day on the ball.

The result means they move above us temporarily, but with a midweek fixture against Leicester on Tuesday we’ve got a quick chance to make amends and regain some points. It’s also not too difficult to fix what went wrong yesterday, so after a good run in January and with a relatively kind fixture list in the coming weeks, there’s nothing fatal about the blow we were landed yesterday.

They’ll go on about power shifts and gaps and all the rest, but we’ve got plenty to get on with and that’s what we need to do. Consign this one to the dustbin of history where it belongs, and react.