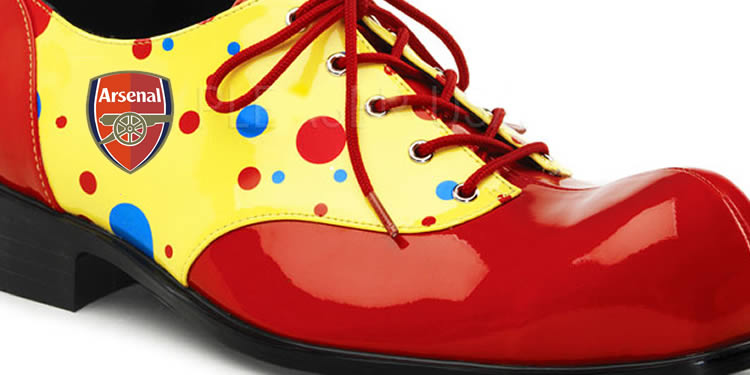 I had a dream last night I was going to a North London derby at White Hart Lane with Tim Stillman. I was under strict instructions not to dress in Arsenal colours so I was all in dark clothes … except for a gigantic pair of shiny Arsenal branded clown shoes.

Inside the ground we got separated and I was set upon by a group of Sp*rs fans who demanded I carry out the secret handshake that would confirm that I, a man wearing a shiny gigantic pair of Arsenal branded clown shoes, was one of them. I didn’t know the handshake so they were about duff me up but at the last minute I made up a poem about Tony Galvin and that seemed to placate them.

I eventually found Tim sitting underneath one of the stairwells where he was writing in a notebook. “I don’t even watch the matches”, he said. “I’m just really good at guessing exactly what happened”. Then I woke up.

This morning there’s chatter about injuries in the wake of Aaron Ramsey’s latest hamstring strain, which will reportedly keep him until mid-March. I know I spoke yesterday about underlying issues being the cause, but part of me also wonders if, like others who have suffered a serious injury, this is something that might affect his career on an ongoing basis.

Last season it was calf problems, this time around it’s hamstring, although I’m not 100% if it’s the same leg. If it is then it might speak to some fundamental weakness somewhere that’s causing all the problems. Still, he’s not been exactly sidelined indefinitely with 28 appearances so far this season, 38 in the last campaign, and 52 the season before that. The manager’s decision to be cautious with him in general is understandable, but maybe, as we search for the answers, we might just have to accept that he’s a player who is prone to muscle strains.

Look at somebody like Sergio Aguero, he’s in and out of the Man City side season after season with little tweaks of his hamstrings and groin. I’m sure they’ve spent a hundred and fifty billion pounds on research and sports scientists from Argentina who use advanced cloning techniques but they still can’t get to the bottom of it. Frustrating as it is, I suppose this is exactly why you have a squad and maybe the return from injury of Jack Wilshere is timely for both sides.

Hey, we’re on the subject of injury prone players, I thought it was a nice segue. Anyway, Jack’s back in full training now and although Arsene Wenger was a little unclear this week about when he might come back into the team, Ramsey’s injury might just put a bit of certainty on that. Under ideal circumstances I’m sure he would have liked to ease him back in action quite slowly – and he might still do that – but the need is there now for him to be available.

As much as I like Tomas Rosicky and Santi Cazorla, I don’t think you can play two diminutive number 10s in central midfield with just Coquelin to protect the back four. We saw on Tuesday against Leicester that they can be a bit too easily bullied physically, and while Wilshere isn’t exactly a huge bloke, he’s more suited to the rough and tumble of play in the middle of the park. I feel like our midfield works best with a deep-lying player, a traditional central midfielder like Ramsey or Wilshere close by, and then the more creative outlet offered by a Cazorla type ahead of both them.

It’s also a big chance for Wilshere to nail down a place in the team again. Bar a couple of performance this season, he hasn’t played anywhere near as well as we’d like him to. At home against Man City he was absolutely fantastic, but those performances have to become the norm rather than the exception. There’s pressure on him now. The weight of expectation, the fact that at 23 he can no longer be considered a ‘kid’, and the sideshows that have gone along with him over the course of his career now need to disappear on permanent basis.

Criticism of his general fitness is understandable, he’s been unavailable too often, although this last absence was down to a very nasty challenge. Even still, there were people suggesting it was his own fault because he held on to the ball too long, as if that in some way justifies a studs-up tackle that could have snapped his ankle. The worst thing it deserved was losing the ball in a promising area, not three months out of the game.

But he’s now at an age and a point in his career where he needs to add consistency to his performances and be an influence on games more often. He’s capable of great stuff at times, just nowhere near regularly enough. And in some way Ramsey’s injury might open the door a little bit wider for him. Right now, I’m not 100% convinced there’s a workable midfield combination that includes them both. It’s an either/or situation for me, and with the Welshman out that leaves Jack with a chance to make a real impact. We’ll have to wait and see if he can do that.

As for Alexis, the hope is that he’ll be fit for Sunday and that it’s just bruising, but I reserve the right to remain cautious/terrified until such time as it’s obvious he’s not completely banjaxed.

Right, not a lot else to tell you. I’ll be back tomorrow with an Arsecast, Tim will be here later on after he’s made some stuff up. Until then, have a good one.