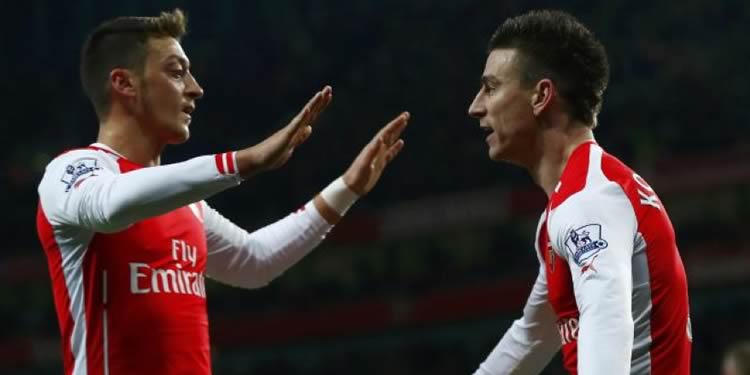 The most important thing last night was ensuring we took three points to bounce back from Saturday’s defeat, and in the end that’s what we got. However, it would make for a pretty boring blog this morning if we didn’t look at it in a bit more depth than that.

The first half saw us take a 2-0 lead into the break and while it felt like that was a scoreline reasonably reflective of the game overall, it was hard to forget the moments of real danger that Leicester caused. Three times Riyad Mahrez came close to scoring for visitors. In the second minute a shot deflected just wide off Monreal with Ospina beaten; in the 13th he squeezed an effort through the keeper’s legs from a tight angle and saw the ball fizz just past the far post; and on 38′ his trickery allowed him to get space to curl an effort just beyond the top corner.

With just 22 goals in the league this season it’s clear that finishing is Leicester’s major weakness, not the ability to create chances. We rode our luck a little bit in the opening 45 minutes, but the difference was we had the players who could put the ball in the back of the net.

For opener it was a brilliant toe-poked effort from Ozil which led to the corner from which Koscielny plundered the opener. The timing of his run to the near post was perfect and he slotted home from close range. For the second the German’s stinging drive was parried by Mark Schwarzer but Theo Walcott was there to tuck away first time. A good finish from a player who is so effective when he has no time to think in front of goal but who otherwise really struggled (more later).

Some of our attacking edge was blunted by the injury to Alexis and when you look at the challenge that took him out it’s no wonder he was hurt. That Upson makes contact with the ball is purely an accident, he absolutely scythes through the Chilean first, and it’s his trailing leg that knocks the ball away. It was little wonder that the referee didn’t see fit to give a yellow card. Actually, I’m surprised Alexis didn’t get one for being overly dramatic or something.

It was clear he wasn’t right after that, although at half-time he told the manager he was ok to play. This somewhat rueful Tweet after the match suggests he might think better about that in the future:

His enthusiasm is such a fantastic asset, but it has to be tempered with common sense – and it has to start with the player first and foremost. Maybe there’s a secondary need for the decisions from the bench to be stronger, but when your best player tells you he’s ok and not feeling any pain, then it’s easy to take him at his word.

But he just couldn’t get into the game in the second half, true of most of our attacking players it has to be said, and Leicester looked the most dangerous team. Their goal wasn’t exactly a surprise, the warning signs had been there, and it took a Mertesacker header off the line to prevent them scoring earlier than they did. From the resulting corner we couldn’t get it clear, they kept it alive and when it fell to Kramaric he fizzed one in at the near post – and I’m not sure Ospina covered himself in glory there really.

Giroud replaced the crocked Alexis as we tried to get back on top of the game but it the visitors who almost scored again, Kramaric’s decision to try and chip Ospina when one on one probably gave him nightmares last night. It was clear we needed more presence and players who wanted the ball, so Ramsey was sent on for Walcott. He lasted less than 10 minutes before tweaking a hamstring, leaving the manager concerned afterwards, and Flamini came on for him.

It didn’t get a lot better but what we did in the final 10 minutes was make the game scrappy so at least their momentum was disrupted. We weren’t helped by a referee who made some decisions you’d simply call wrong if they weren’t also so outrageously stupid. Ozil was taken out going through, he played on. Giroud was penalised for having the ball whacked at him, as was Flamini. If the ball to hand in their area wasn’t a penalty for us – and I’m fine with that – surely that should work both ways.

It culminated with the most ridiculous booking you’ll ever see, Giroud being yellow carded when Schwarzer kicked the ball into his back as he was running away from their area. In a season in which refereeing across the Premier League has been little short of abysmal, it continues to exasperate in new ways almost every week. Maybe with all this new TV money coming in the future, somebody might recognise that the standard of officiating is plummeting like a stone and do something about. Yeah, right.

In the end we hung on and took the points. You can certainly question the performance, perhaps confidence was dented after Saturday (certainly energy levels were), and that the league’s bottom team caused us so many problems is a worry. Nevertheless, the win moves us into fourth, above the crowing cocks who got beaten by the Mugsmashers, and that’s exactly what we needed. How we did it is open to analysis, but first let’s be happy we did it at all.

We had some good moments in the game and a good spirit. We dropped in the second half and became a bit nervous. After the defeat against Tottenham it was very important to win this game. It was a hard game with a difficult period but we stayed strong and the three points are important.

The issue is now is to see what the fall-out from this one us. For Alexis, hopefully there’s nothing too serious other than a bit of bruising but that’s the sort of challenge that can shake all sorts lose in your knee. As for Ramsey, Wenger contends he hasn’t been overplayed and that he’s been cautious with him of late. I think that’s true and I fully understood why he chose him over Flamini in the course of last night’s game.

What we can ask is why this is the third hamstring injury he’s picked up this season. We can wonder was the warm up sufficient or is there an underlying problem? It turns out an ankle problem was the root cause of Mikel Arteta’s repeated calf strains this season, would it be a surprise to discover something similar when it comes to Ramsey? That’s one for the medical staff to get to the bottom of, and quickly.

Another thing for the manager to ponder is the performance of Theo Walcott. On the very surface you look at his goals to games ratio since he came back and last night was his third goal in three starts. Yet look a bit deeper and there are concerns. This was the sum total of his passing game last night in the 72+ minutes he was on the pitch:

He attempted just 9 passes and completed only 6 of those. He had fewer touches of the ball in all that time than Giroud did despite the Frenchman playing 50 minutes less (thanks to @JongsmaJongsma for that stat). It speaks to a player who isn’t involved enough. He was selected on the right hand side last night, but his trick of drifting into the centre into positions where he can’t get the ball – or where it’s not sensible for other players to give it to him – means he barely features.

He fluffed a great chance in the opening minutes, was on hand to tuck away the rebound very smartly indeed, but aside from that he was a complete passenger. I don’t think it’s overly-critical to expect more from a player. I get he’s not the most technical or skillful and that his main strengths are getting in behind and finishing, but on nights like last night he becomes very difficult to carry. If Mesut Ozil had been as uninvolved last night, the Daily Mail would have had him deported.

On a recent Arsecast I discussed Walcott and Podolski with James, and the similarities are obvious. They’re both players whose all-round contribution is minimal but whose finishing ability means they’ll always get you goals. I believe Arsene Wenger realised he couldn’t have two of them in his squad, hence Podolski’s departure, but surely there comes a time when you either have to ask for more from Walcott, accept that this is the price of having him in the side or think about his long-term future.

Perhaps it’s overly-critical and it’s still early in his comeback, but at the same time this kind of thing is not new. He’d have these games before the injury too. It’s surely going to weigh on the manager’s mind as Theo’s contract will soon be an issue and his financial demands are unlikely to be commensurate with the level of performance you get from him.

He continues to confuse me, the goals are obviously hugely welcome, but he has to be more involved in games because when you have a player who allows the game to pass him by the way he did against Leicester, you invite pressure on yourself and it’s obvious that’s part of what happened last night.

Anyway, plenty to ponder before the next game, the FA Cup clash with Boro at home on Sunday. On the basis of last night’s performance it’s a game we’ll have to take just as seriously and the possibility of rotation is diminished somewhat. More on that as the week progresses however.

Finally for today, Sky and BT Sport trumpeted a new TV deal yesterday which will see them pay £5.1bn for the rights to show the Premier League for a further three season from 2016/17. Above all else it’s good news for fans, as outlined here.