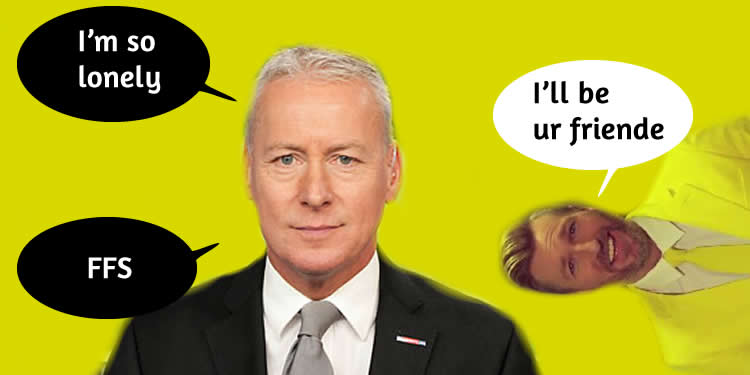 So Transfer Deadline Day came and went without so much as a sniff of Arsenal being involved, and to be perfectly honest, that’s a great thing.

It’s such a horrendously over-hyped, made-for-TV, wankfest of a day that the fact we had no need to be part of the goings on can only be applauded. Let’s face it, if Transfer Deadline Day was a person it would be a some kind of genocidal dictator, determined to unleash germ warfare on unsuspecting civilians.

Actually, now that BT have got in on the act with their own all-day helium-voiced extravaganza, maybe it’s more like the drooling, club-footed, hunchbacked kid who always had crusted bogies around his nose who always got picked last but had to play because he owned the best football.

The only things that happened were small-time deals like Robert Huth and Yakubu going places I don’t care about, Chelsea signing a bloke who is obviously the son of one of DeBarge, and somehow getting Wolfsburg to pay £22m for Andre Schurrle, a bit like selling a door that had been scribbled on by toddlers for the price of a Picasso. I’m not suggesting there’s anything fishy about the kind of money Chelsea get for the players they sell but there’s something fishy about the kind of money they get for the players they sell.

Anyone hoping for a last minute trolley dash at our end though will have been disappointed but it was never going to happen. For once we did what we needed to do in January in good time. The players we wanted to loan out went early. Podolski and Sanogo are at Inter and Palace, while Joel Campbell went as part of the negotiation process for Gabriel from Villarreal.

And the fact the Brazilian arrived meant that the biggest issue we had in the squad was addressed. We needed a centre-half, we got a centre-half, and now we have a centre-half. It’s kind of amazing that it was all done without a huge amount of fuss or bother or last minute paperwork, but perhaps there’s some evidence that lessons might well have been learned from deadline days of yore.

I know there were some out there who wanted the club to bring in a defensive midfielder, but I tend to agree with Thierry Henry when he says the sudden influence of Francis Coquelin has made that less a priority than it was. Speaking to Sky yesterday as they desperately waited for something – ANYTHING! – to happen, he said:

Maybe if he hadn’t come back and played the way he did recently, Arsene would have gone and bought a defensive midfielder. Sometimes you look for that player and they are right in front of you. But the guy has matured, he went on loan, and knows he had to perform and he is doing it.

But what’s most interesting about what Henry said is this:

And that’s a crucial point. Let’s say that Morgan Schneiderlin is the player we really want. I don’t think there was ever any realistic chance of getting him this month, unless we paid significantly over the odds for him. I know some people will say you sometimes you have to do that to get your number 1 choice, but it’s not as if there’s a bottomless pit of money. Doing that would have knock-on effects in terms of other summer business we might have planned, for example.

If you have a solution like Coquelin has provided – and I think we still have to see if it’s going to be a long-term one in fairness – it allows you to take the same player at a time when the other club are more willing to do business, not to mention the player himself being more open to a move. Considering the season they’re having, I suspect it would have been difficult for Schneiderlin to pack his bags in January.

In the meantime, we’ve got a player doing exactly what we’d want a new signing to do anyway. If we’d spent £10m on Coquelin on January 2nd, people would be talking about him being a bargain and a fantastic find. We’ll have to wait and see if he can keep it up between now and May because he’s never had a spell of form like this in his career, but there’s no question that he’s added something significant to the team since being given his chance.

However, it’s worth noting that he’s a contributor to, rather than the sole cause of, the new-found defensive stability, because there are other factors too. Having Koscielny and Mertesacker back together has been important, and to hear the German talk about how they reacted to the Southampton defeat shows you that this has been a collective effort and not simply down to having a player like Coquelin. He said:

Southampton was a major setback – it was a bad start to the year. After that, we promised ourselves … to be a bit more focused, especially to know that what comes first is defensive work and not just for the back four.

We worked a lot on our defensive shape, not just the back four, to avoid those dangerous free balls against us. We look much better. Maybe sometimes you need a wake-up call.

I know we’ve heard it before, but the results of that improved defensive focus have been obvious. Since Southampton we’ve played played 5, won 5, scored 15 and conceded 2 – and that was with a shuffled around back four and midfield in the cup against Brighton.

The other thing about defensive stability isn’t just that it means you concede less, it’s also that you have a more secure platform from which you can attack, and I think we’re seeing that. Certainly the Villa performance was a consequence of it.

So, overall this feels like a decent period. The squad is more balanced, there’s some confidence, belief and momentum, and we had no need to be involved in anything involving a yellow-tied gimp yesterday. Long may it last.

If you missed it yesterday, you can find the Arsecast Extra here, in which we discuss Villa, Ozil, Bellerin, Calum Chambers, James’ new life as a Katy Perry shark dancer and much more.