At the risk of rehashing what every self-respecting follower of footballing matters already know, I should like to recount something of the life of our splendid and aggressive new sentinel,Mr. Gabby Pallister, our spanking new piratical Number 5. 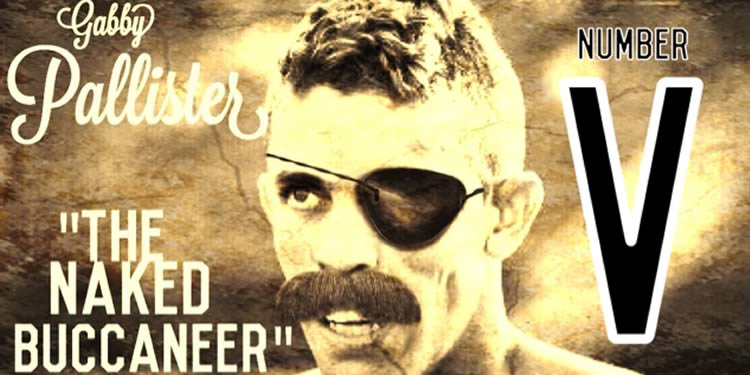 He was encouraged in all matters by his mater, a well established Pirate Queen, who surely was responsible for instilling young Gabriel’s anarchic, anti-establishment, pro-Pirate, anti-Spurs mind-set and set him on his course. She hand-stitched his first football for him, made from chainmail stuffed with ball bearings, and every night she would train him to attack the ball with ever-increasing gusto.

She would entice passing strangers into the game from her seat in the front garden, asking them pray kind sir, please help me, can you hold this ball for one moment? And then scream GABBY! ATTACK! NO MERCY! At which point the young lad, stark bollock naked, would come flying out of the house bellowing at the top of his lungs AHOO! AHEE! FLEA, ENEMY, FLEE! And dive, foot first, at the poor stunned wretch who was holding the ball. Again, encouraged by his mother, he would seek out old ladies walking Yorkshire terriers in the park and hoof the poor unsuspecting canine into the tree.

During his inevitable time in Borstal, something seen as desirable by his mother, who felt it would be “character building”, he developed his trademark clearance, ‘Blackbeard’s Blunderbuss’, whereby he would, when placed under pressure, launch the ball some 300 yards away, over the wall of the Borstal. He became something of a hero as due to the local ‘The Please Sir Can We Have Our Ball Back Under All Circumstances (1834)’ byelaw any “young ruffian, or footpad, having lost his foot-ball may retrieve said ball from wherever it may lay.” This way young Gabby helped scores of young offenders abscond from custody.

Following his release he satisfied his urges to pillage, loot, scrap and run around naked by joining a band of pirates off the coast of Somalia. Known as ‘The Pale One’, he had to pass a series of tests to join the pirate band, which he passed with flying colours. He was cruelly written out of the moving picture ‘Captain Phillips’, despite quickly becoming the leader of the gang who raided the ship. In fact, the catchphrase “I’m the Captain now” was originated by Pallister, who now utters those words when delivering one of his other special moves, ‘The Pirate’s Prevenge’, a sturdy tackle, wherein the ball is taken cleanly from the opponent in direction ‘A’, and the opponent himself is dumped on his arse in direction ‘B’.

When he grew wearisome of piratery, he made his way back to Blighty and was taken on at Plymouth FC as something of a minister without portfolio, a kind of berserker, whose job it was to roam around the pitch causing problems and annoying people. You know the sort of thing, like the role of orange-faced straw-headed coward Robbie Savage, who did it rather badly (in that he ran away after winding up his opponent).

But it soon became clear that Pallister’s calling was as a Rear Sentinel, and he proved adept at central, left, and right-sided versions of this position. He often runs onto the pitch stark bollock naked excepting his tricorn hat with skull and crossbones upon it hence The Naked Buccaneer. A magnificent entrance, I am sure you‘ll agree.

As his signing was announced (he signed in his own blood, by the way – he opened up a vein wth his teeth), I turned as I always do to Mr. Face’s Book, and Arsenal’s official presence therein to see what the great unwashed were saying about his arrival. I give you Banky Iwuala Valentine, the world’s greatest exporter of raw commas.

He doesn’t look like a vampire, Banky, old egg, he looks like a pirate. But I concur with your concern regarding any familial links with Mr. Squirrel.

I stand foursquare here with Mr. Sandesh Thapa, who speaketh the truth. Although he’s not really coming home, is he? 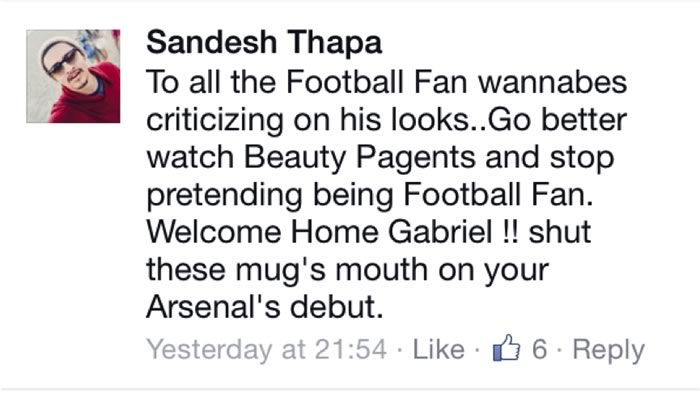 Go better watch Beauty Pagents and stop pretending being Football Fan. Could not have said it better myself. Which is what I amp about to do now. Off to the Pagent and to shut these mug’s mouth.