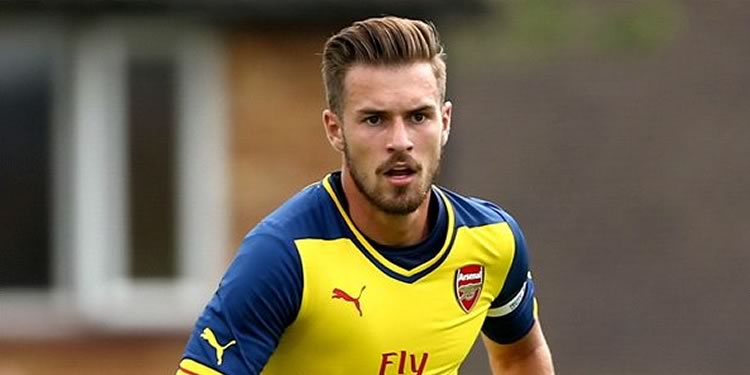 The heroics of Aaron Ramsey’s 2013-14 season need little repeating. Quite aside from the winning goal in the FA Cup final, he grew into one of the finest box-to-box midfielders in Europe. A team which contains high energy players who can score and create, maintain high levels of defensive awareness, impressive physical power, and who possess understated finesse will probably achieve most of its desires. Last season, Aaron Ramsey was all of those things stuffed into one wonderful package.

It was expected that he would continue this season in much the same way. Perhaps the goals would slow down somewhat with the arrivals of Alexis Sánchez and Danny Welbeck, as well Theo Walcott returning to the side. He could settle into becoming a goalscorer in times of greater necessity rather than carrying so much of that burden.

Regardless, his goals were the somehow second to his ability to do just about everything else anyway. The partnership with Mikel Arteta was instrumental in Arsenal’s strength in defending through most of last season. Ramsey’s phenomenal engine, intelligence and defensive ability protected Arteta’s immobility, allowing him to sit comfortably as the team’s stabiliser. The security of total trust in his partner meant Ramsey was free to pursue his own game, and if he needed any reining in, Arteta was there to guide him through.

In Ramsey’s 21 games in a pair with Arteta or Mathieu Flamini in the 4-2-3-1, Arsenal conceded 21 goals. In his absence they conceded 27 in 19*. Indeed, with Ramsey alongside Arteta they kept 8 clean sheets in 13, with Liverpool, Chelsea and Borussia Dortmund making up those numbers, while without him they conceded 11 in 2 to the former pair. All the while, attempts to form cogent attacking play without him were bordering on painful to witness. Ramsey knitted the two ends of the team together by being so important in both departments.

*Crystal Palace and Everton away not included.

The goals – highly necessary ones too – were there at the very start of this season, but his play lacked fluency, and his all-round game, both on and off the ball, was just not quite there. He was not moving the ball as quickly, and his decision making was more rushed and haphazard.

The obvious reasoning was the move to 4-1-4-1. It pushed him higher up the pitch, giving him less of the game in front of him. Ramsey’s greatest skill is his work off the ball (which is not to denigrate his exceptional aptitude on it). His timing and ability to pick his moments – in terms of knowing when to drive forward, and then from there to break into the box, or even to push into wider areas, and when to press or sit back on the defensive side of things – is usually outstanding.

Now being closer to the opposition when he picked up the ball put him under more immediate pressure. He cannot dribble like Santi Cazorla or Jack Wilshere, but again, his intelligence in picking his moments meant that his dribbling from deep was effective when he used it. His number of successful tackles per game has dipped (from 2.83 per game to just 1.4), as has his number of missed ones (2.65 to 2.1), speaking to a player less assured in his role.

It also led to his runs becoming easier to track: there was so little element of surprise to them anymore because he was the obvious target. His main supply line last season was a combination of Mesut Özil and Olivier Giroud. When Özil pulled into deeper or wider areas, the space more centrally would open up and Ramsey would attack it. Giroud, meanwhile, made a good job of the decoy-type near post runs that dragged defenders away. The best example of it, among many, is the goal against Borussia Dortmund away.

So, with Özil starting wide rather than choosing when to wander, thus the German’s effectiveness was inhibited, and Ramsey’s with it. Aston Villa away game showed the improvements of 4-2-3-1 for both, but also the extent of Ramsey’s form dip. Despite far more impressive and useful movement his passing harked back to the ‘bad days’ of 2012. Then Arsène Wenger shifted back to 4-1-4-1, Ramsey got injured, and only since return has the deeper sitting pair been back in force.

However, even when Arsenal are back to something closer resembling 4-2-3-1, Ramsey is not himself. Amid his (and the team’s) second half performances, it has quickly been forgotten that his two first halves against both Anderlecht and Swansea were some of his better displays this season. He was not his 13/14 self, but he was functional, well-positioned and working for the team. This was true right up until before both of the opposition sides’ first goals.

From there, it was far worse than anything seen in the 4-1-4-1, or even in those ‘bad times’. At least when he was struggling through 2012, he was working sensibly for the team, even if his feet and speed of thought were not quite on the same wavelength. As pointed out by Wenger, the last half an hour against Anderlecht saw a Ramsey going in search of goals rather than working for the greater good.

Swansea was slightly different, but with fundamentally the same root cause. In his inconsistency he seems to have desperately upped the ante in his search for his first goal since August, rather than the fundamentals that made him so effective his role in the first place. In this instance, if he is not doing the smart thing himself, he needs guidance and leadership. For the first hour against Anderlecht, before Arteta’s substitution, he had it.

It’s often said that the manager’s style requires his players to be bold and tactically astute enough to make their own decisions as in-game situations change. It is not that Wenger is incapable of taking control at such times but can be, especially this season, far too lax in doing so. Arteta is one of those players who takes charge on the pitch, and it can be argued that the only player who misses that more than Ramsey is Per Mertesacker.

In the wake of last season and with his reputation enhanced to such a degree, there is a strong case that Ramsey is the most senior midfield figure behind (the absent) Arteta and Özil. Essentially this left an off-form player feeling like he had to take greater charge of the setup.

If the manager cannot be sure of his players making those decisions for themselves, he has to step in and tell them what to do. It goes against Arsene’s regular style but he has been known to do it – the end to 12/13 being the best recent example, and the good form of 13/14 directly followed on from that. He is reluctant to take that trust from his players but when the players (for one reason or another) do not warrant it, he has to.

Ramsey is not broken, nor was his golden season some kind of purple period, but without full trust in himself he appears to be in need of a guidance that he has actually never before been without while at Arsenal. Ramsey himself has to take more responsibility, but the advice the manager gave the Welshman about going back to basics could equally be applied to him.