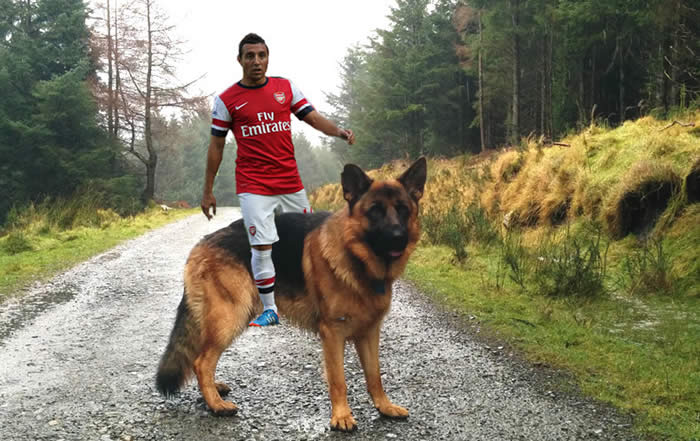 It’s my sad duty to report to you this morning that every Arsenal player has been devoured by a wolf. I mean, I haven’t read that anywhere but I’m just assuming that’s what happened.

The youth team are too afraid to make the step up. Gedion Zelalem tried, the brave little soldier, but no sooner had he declared himself ready for the first time than he developed super-leprosy and his right arm fell off. Brandon Ormonde-Ottewill, nephew of the Arsenal Gent, cried. And drowned in his own tears.

The latest development in our injury crisis came yesterday when Laurent Koscielny was sent back to Arsenal by France because he is, according to France Football, suffering from ‘chronic tendinitis of both Achilles tendons’. That doesn’t sound pleasant at all, and even if the move was described as precautionary it’s hard not to worry simply because, you know, we don’t have any defenders to provide cover.

In the absence of Mesut Ozil you can choose from Santi Cazorla, Jack Wilshere, Alex Oxlade-Chamberlain or Tomas Rosicky to fill the gap. If Koscielny gets hurt then we’re reduced to driving around the streets looking for a football version of that homeless dude in the USA who had the great radio voice. “Top class centre-half, just need chance.”

In this instance we can have nobody to blame but ourselves. If Koscielny’s condition is ‘chronic’ then that’s our fault because we don’t have the required depth at centre-half to give him the rest he requires to un-chronic his Achilles. And even if he can play, anyone who has ever had any kind of Achilles injury or condition will tell you it’s jolly painful and, more than likely to have an effect on how well you perform.

Hopefully the rest ahead of Hull will do him some good, but over the course of the season I suspect this is going to be an ongoing issue, and the last thing we want is any kind of Achilles twang or snap because that’s seriously nasty.

Thank goodness then for Per Mertesacker who expounded on his decision to retire from international football. Instead of getting ready to play Poland and Ireland this week, he’s getting the power back in those long legs of his, and says he felt a responsibility to the club which was part of his decision making:

I reflected and last season was very tough. This season won’t be less intense so I needed a chance to rest and refuel. I want to push forward with the club now to show I can still improve. I realised over the last few years that the club really needs me and that was a big motivation to win something with them and then with Germany. As vice-captain I feel more responsibility for my work here and I want to achieve more in my next three years with Arsenal.

What a man. He’s now joint 5 in my top 5 things of all time, alongside puppies. As we know anyone who doesn’t like puppies is completely weird and I want nothing to do with them, and the same goes for Per. All the same, imagine the terror of both Koscielny and Mertesacker being away for every Interlull this season. I’m dismally resigned to injuries playing a significant role in our season, but this would be just too much.

As for our prognosis of Mesut Ozil, there’s an acceptance on the official site that we’ll be without him for ‘at least two months’, while Arsene Wenger says:

When he arrived with the German national team, they didn’t think it was a lot at the start. Then he had a scan and it was bad news. We have our own specialist giving us his opinion after reading the scan and examining Mesut. We will follow our own recommendations.

–  Have you tried turning him off and on again?

– Hang him upside down for a while and see if that helps.

– Put him in a box with dried rice

One of them is bound to work. As for the others, there appears to be some encouraging news over Aaron Ramsey with Wenger saying:

For Ramsey it’s day 13 today and I think it will be day 21 before he is back into training.

Reports last week said he might be out for 8 weeks so if this is correct that’s some kind of silver-lining to the current bandaged wrapped, poultice-raining cloud that hangs over us. Mikel Arteta should be back for Hull and there’s even an outside chance to Theo Walcott could be back in the squad.

Meanwhile, new youth supremo Andries Jonker says that improvements must be made in the scouting department if the club is to start producing the calibre of players it requires. In a lengthy interview with Voetball International, he said:

At this moment, considering the investments the club have made, players have hardly been developed properly. This is why they wanted me, a man who can guide the coaches and who can influence the other coaches. The scouting must be restructured all over again. It needs to be brought to a level so that we can bring in the absolute best talents from abroad and from England at an age that Wenger can immediately work with them.

There’s more interesting stuff in the article and you do get the feeling that behind the scenes the structures at the club are changing slowly, but surely, and that’s definitely not a bad thing. As we saw at Manchester United, the departure of an epochal manager like Ferguson – and Wenger is about the last one at the top level anymore – can be difficult to deal with. It’s as if they’re the glue that holds things together.

Over the last 12 months we’ve jettisoned the likes of Liam Brady and David Court and brought in Jonker and his team to revamp the youth system. The scouting department has long been one with question marks over it, so it was interesting to read reports last week that former Arsenal player, as well as Reading and Leeds boss, Brian McDermott had agreed a three year deal to join the club as a scout.

Given his experience and reputation, it’s hard to imagine he’d agree a position without a significant amount of responsibility. Steve Rowley has been Wenger’s main scout for years, but maybe, as in the case of Brady/Court, there’s an acceptance that sometimes you need to freshen things up. I guess we’ll see in due course, but it’s clear that things are changing a little.

Where I’d love to see a further appointment is to the board and someone who brings genuine football and Arsenal knowledge to the table. You look at Real Madrid or Barcelona, for example, and they’ve long had ex-players in important roles and I don’t think you can underestimate the importance of that. Perhaps, at the moment with Arsene Wenger still in charge, that kind of appointment is more difficult, but at some point in the future we’re going to have to change the way the club is managed, so getting those structures in place is important.

The board could certainly use more football experience anyway – the last appointment was Josh Kroenke which is very much a job for the boy appointment – so fingers crossed that those tasked with preparing for the future are open to the addition of genuine expertise and knowledge.

Right, that’s about that. As you’ll have noticed there’s no Arsecast today due to the Interlull (hey, blame UEFA), but we’ll have an Arsecast Extra on Monday for you. More from me tomorrow.