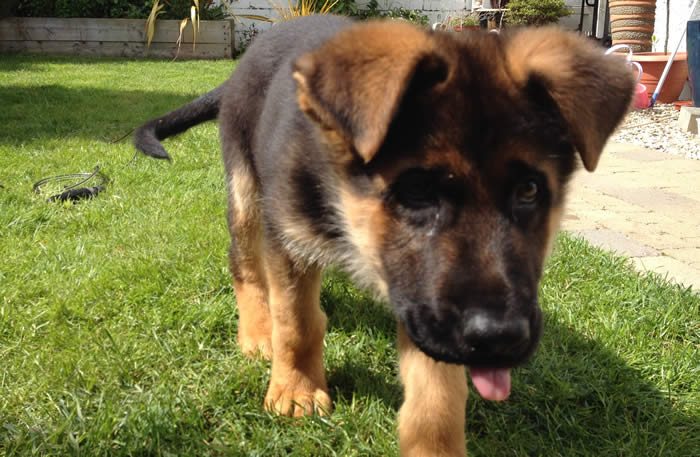 Did you ever stop to think about your top 5 things of all time are? I don’t mean subject specific things, like your Top 5 Sci-Fi movies or your Top 5 Ways To Dispose of John Terry’s Corpse, but your actual top 5 things in the world … ever.

I certainly haven’t and as such I’m going to have to make them up now for the purposes of this blog. I list the following in no particular order, except numbered, but the numbers are fluid and each thing could find itself higher or lower on the list depending on my mood, the time of day, and how long it’s been since lunch. Here we go:

The first four seem pretty obvious to me, and as for puppies, well they’re just awesome. I’m as suspicious of people who don’t like puppies as I am of people who skulk in shadows, following you in tippy-toe, xylophone cartoon steps style who, when you look at them, do that thing where they point at their eyes then point at you then point back at their eyes, pursing their lips all the while.

Now, I present this list not because I feel like sharing the intimate details of my life, but instead to illustrate a point. When thinking long and hard (30 seconds) about the construction of that list, I had to seriously consider dropping one of those things in order to put Per Mertesacker on it.

Sadly, he didn’t quite make it. You can’t have a Per Mertesacker roll in the morning with lots of brown sauce. You cannot drink a cool, cool Per after playing football, nor have a Mert on the rocks when it’s late at night and you’re trying to play FIFA online with one eye open against some 16 year old who can do ALL the tricks. And as for puppies, I’m sure Per Mertesacker would be a most loyal pal, going everywhere with you, larking about in the garden, but he lacks a certain smallness and fluffiness and it would probably be a bit weird if jumped up and constantly licked your face with love.

But he came really, really close and that’s why the announcement yesterday that he has signed a new deal made me happy. When he arrived people said ‘Oh, he’s too tall and he’s too slow and he’s not going to be able to cope with English football’. That he was asked to come to a new country, and a new league, and cope with that while playing for a team that was in rag order certainly didn’t make his first few months easy – but he was settling in nicely when his ankle fell victim to a sinkhole on the Stadium of Light pitch and he missed the rest of his first season.

So those doubts about him continued. Until, that is, the following season when it became apparent that he was almost as awesome as a puppy. His positioning and reading of the game is second to none, in my opinion. He’s a great passer of the ball and he did one of my favourite things of all time: scoring a big header. I don’t mean the importance of the goal – although it was huge because it came against Sp*rs at a time when we were 1-0 down to Sp*rs – but the way he loafed that ball into the net, a bit like Sagna against Sp*rs, was just great. For all your 30 yard screamers or curlers and wicked dribbly runs, those goals are, for me, right up there with the best things in the game.

He’s got his weaknesses, sure, like any player, but in Laurent Koscielny he’s got a partner who makes them less of an issue than they might be. When pace is required, there’s the Kos to mop things up. And when Kos nicks in to try and win the ball aggressively, Per has got his back. They’re like a footballing Murtaugh and Riggs. They complete each other and I would happily attend their wedding if that’s what they wanted to do. I’m guessing they don’t, but I’m just saying.

Mertesacker’s qualities aren’t just on the pitch though. He’s a leader, a talker, a shouter and he doesn’t care if you cost £42.5m or if you’re sad because we’ve been beaten when there are other things you should be aware of. This is a man who chose not to do his national service in the army but take a year instead to work with mentally ill people. He says it gave him an outlook on life that he carries with him to this day, and you can see that when he plays and when he talks.

He’s a dressing room leader too. Vermaelen might be club captain; Arteta might wear the armband on the pitch most of the time; but Per is one of those characters around which most things revolve. If you’re late for training or step out of line in terms of the club’s discipline, you’ll have Mertesacker to deal with. I doubt there’s anyone who shirks their payments, and I doubt that anyone is allowed because Per won’t stand for that.

He’s also fantastically intelligent and self-aware. Check out this post he made on his own Facebook page, showing him in the JVC Arsenal shirt. He’s one of that rare breed of modern footballer – one with whom you can connect. Not for him the ostentatious, often vulgar, displays which do nothing but highlight the disparity between their world and the real world that most of us live in.

In conclusion: I wish he was my best friend and I’m chuffed he’s extended his deal at the club.

There’s nothing like a bit of good news after a bad result, so that’s probably why we got the announcement of the new deal for Per and confirmation of Tomas Rosicky’s new contract yesterday. I suspect that’s also why we were told yesterday by the Guardian that Aaron Ramsey has returned to full training and why he too has signed a bumper new deal to reward his progress in the last 12-18 months.

People might raise eyebrows at the Ramsey story, as he’d been part of that Brit5 signing in December 2012, but the circumstances have changed considerably. Back then the new contract was a show of faith in a player who had been really struggling and was the butt of much criticism from sections of the fanbase. Ramsey responded in the best way possible. Knowing the manager believed in him, and that his future was secure, he finally overcame that hurdle and developed into a player that has, this season, been hugely important.

His new-found stature at Arsenal, and in the context of the wider game, means that a new deal is merited for its financial reward but also to ensure that his future is tied to the club as long as possible. It’s also tied in with Mesut Ozil, as I mentioned the other day, where the German’s wages become the benchmark and that inflationary effect kicks on throughout the squad.

That’s a natural consequence of making signings like that, and something we have to contend with. It looks like we’re doing that in a very proactive way (one might speculate there’s a certain amount of getting our house in order), with the majority of our best players now tied down to long-term contracts.

There are still one or two issues to sort out, obviously, but all you should take from yesterday is the good stuff. There’s always a ‘But what about …?’ qualification to most positive announcements these days, rather than just enjoying them on their own merits.

Which is what I’m going to do this morning. Right after I have a bacon sandwich. Till tomorrow.