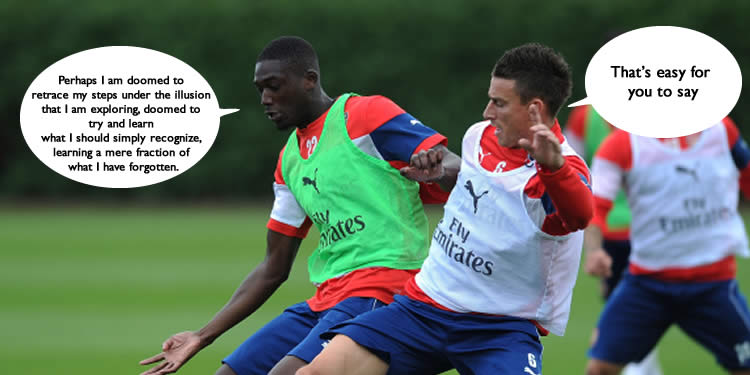 I’m afraid that there’s nothing to blog about this morning. All we’ve got is Arsenal players talking about other Arsenal players. On the one hand I’m tempted not to do anything at all, on the other I know people want something to read as they go to work, or arrive at work, or perform their morning ablutions.

It’s pretty dull stuff, but hey, what alternative do I have? First off:

We have people up front with the knife in their teeth who want to go for it, so we have to make the most of it. The more we do it, the more we will improve. Alexis closed Sunderland down really well. His desire and his commitment, in addition to the way he wants to train and improve himself, is spot on. Alexis is one of the best. He’s very committed. Even in recovery sessions he wants to go outside and train to keep improving.

The man is a machine. When he arrived he brought something with him from Manchester United – a Playstation 4, and he’s become the FIFA champ of the training ground. Jack didn’t half get the hump because that was his crown, but Welbz has shown some real quality there. When Jack played with Bayern and got beaten by Danny who had picked Coventry the rest of us just cracked up! “How can you make Simeon Jackson do that?!”, he said before chucking down his controller and storming out. Welbz just laughed.

Even though he’s not playing and he’s obviously frustrated by that, he hasn’t lost any of his Joie de vivre, as we say in Germany. He’s always laughing, always joking, and he makes the dressing room a better place to be. His practical jokes are legendary. He doesn’t care who you are. Last week he put a dead fish in Cazorla’s kit bag, and the week before he used the internal phone in the dressing room to call up the manager’s office and asked for Anita Bath. Arsene just said ‘She’s not here, Lukas’. Lukas screamed and ran outside chasing a squirrel.

We all knew him from before but when he came back he was determined to ensure he was thought of as the hard man. We saw his first tackle in the North London derby and thought ‘Yeah, that’ll do’, but he slightly ruined it the next day when he came in wearing denim shorts and a tank-top insisting that his new nickname be ‘Jean Claude’ after his action movie hero ‘van Damme’. Instead we call him ‘Squawk’ because he’s fat and old like Steven Seagull, or whatever he’s called.

I really like Olivier. He’s a very nice man and sometimes we have a little joke with each other about our hair because we both like that new style where it’s high off the top of your head. A lot of people find that fashionable these days and we’re two of them. I think my beard is better than his, but then he’s never really grown one so perhaps that’s an unfair comparison. We get along very well and sometimes we’ll go out to dinner to a nice restaurant, or more often we’ll go to his house for tea because he’s got a small child and it’s not always easy getting a babysitter, even when you’re a professional footballer. We both enjoy steak a great deal and we always laugh when we both order the rib-eye medium rare. It’s so funny.

People might not believe this, but there’s nothing he doesn’t know about surrealist poetry. He put me onto André Breton whose words get me through each day. People know I’ve had my struggles since I got here, and at times it felt like I should give up, but then I find a passage which will inspire me and keep me going, for example:

“The man who cannot visualize a horse galloping on a tomato is an idiot.”

Do you see? I can be the horse, the tomato, the man or the idiot! It’s an illustration of how life shifts in short moments and we must be ready. Nothing that surrounds us is object, all is subject.

Obviously we knew him from his time at Newcastle, and the French lads had nothing but good things to say about him as a player but they warned us he was bit intense. In his first training session I made a save from a shot and he came right up to me, starting into my eyes for what seemed like the longest time. I wasn’t going to back down, nor was he. The game went on around us with both of us just eye to eye, neither of us willing to blink, to give in, to let the other one win. I remember hearing voices in the distance, I think it was Bouldie shouting ‘Will you two Joeys get on with the game!’, but I ignored it. Then all of a sudden he just said ‘That’ll do pig, that’ll do’, and we broke our shite laughing. I got him a t-shirt with a pig on it the next day and he sometimes calls me ‘Babe’ and licks his lips but I don’t really remember that bit from the movie. Oh well.

[infobox]You can find all these interviews on Arsenal Player *[/infobox]

Right, that’s that for this morning. I’ll be back tomorrow with an Arsecast in which we’re going to discuss all the goings-on of the week. It might be like an extended remix of that John Cage song so.