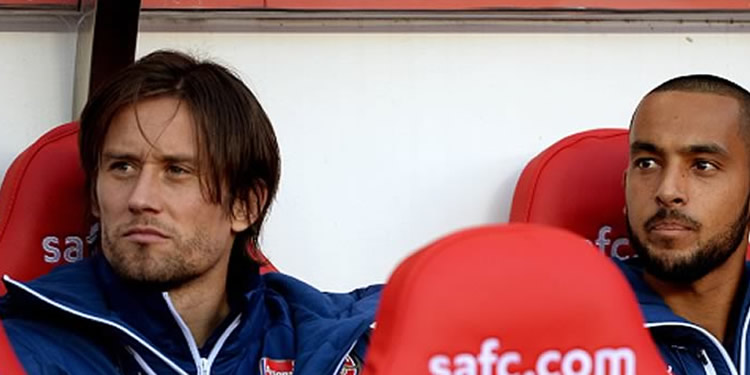 It’s gonna be a short one this morning due to the fact it’s a bank holiday here. Not that I’m doing anything particularly special, and I’ve been up since 6.45 anyway, but it just feels like a few hundred words less than normal is something of a gift to myself.

While accepting that our problems are still very much in sharp focus, it turned out to be a good weekend for us in terms of the other teams we’re supposed to be paying attention to. Maybe Chelsea are too far ahead to get really happy that they dropped points, but every time something bad happens to Mourinho I’m going to enjoy it.

That it was an injury time goal from the Dutch Skunk that pulled it back for United isn’t ideal, but I’d take some van Persie joy for a dose of Special One pain any day of the week. If there wasn’t a part of you that laughed, out loud, perhaps rolling on the floor or laughing so much your arse literally fell off, at the sight of his disgusted face when that goal went in then you’re dead inside. I urge you get help immediately, because nobody should miss out on moments like that.

Elsewhere, Liverpool dropped points to Hull, Sp*rs got beaten by Alain Pardieux, Man City lost to Allardici’s West Ham and we find ourselves in 5th position. Ok, it’s still not the start to the season we wanted, and we obviously still have problems of our own, but when we’re playing poorly, there’s some comfort to be taken when our realistic rivals for the top four do likewise.

I do wonder if the manager might be tempted to mix things up a bit this weekend for the game against Burnley. I know it’s early to be speculating about a team for Saturday, but with no Capital One Cup we do have to think about the whole of the squad rather than just the first 11-13 he seems to always use. If you want the likes of Campbell, Podolski and Rosicky to make an impact in games against better opposition, you have to play them at some stage.

You can’t expect them to come off the bench having had a minimal amount of minutes and find the rhythm of a game. There’s a balancing act needed and part of the manager’s job is to to ensure that when these players are required they’re a) match sharp enough to do a job and b) in the right frame of mind when their time comes.

I know you can’t read too much into a snapshot, but perhaps the picture of the winner against Anderlecht told us something about Tomas Rosicky. As the rest of the bench are up celebrating, he’s sitting stock still, staring at the ground like he hasn’t reacted to it at all. He has gone public a couple of times over his lack of playing time this season and I’m told that he’s working hard behind the scenes but obviously affected by it. Is he regretting turning down a big money move to MLS?

The same goes for Podolski. I understand why he’s not a regular in the starting line-up, but he too has gone on record saying things have to change or he’ll consider his options. Now, whether you rate him or not, having depth to the squad is crucial and keeping the fringe players happy is a big part of the manager’s job. If you can’t do that, you lose the depth. If you lose the depth, you’re going to pay for it at some point during the season.

You need only look at what a lack of options at the back has resulted in. As we sweat over yet another injury, this time to Kieran Gibbs, the consequences of not having enough players back there is obvious. If you isolate and frustrate the squad players it’s going to come back to bite you in the arse one way or another. Either they’ll struggle for form or motivation, or they’ll want to leave.

Against opposition like Burnley it’s a chance for some of those players to play, to show what they’re capable of (or not), and to keep them involved and feeling like they’re involved. I do get that the manager wants to let his ‘first’ team find some rhythm and form but maybe some of them need a bit of a rest to do that. Would Rosicky ahead of Cazorla on Saturday, for example, affect us that much?

I love Santi but he’s not pulling up any trees at the moment and maybe he’s feeling the pressure a bit in the absence of Ozil. A game or two on the bench might let him get his head right. It’s not a death sentence or anything. And with Theo Walcott due to be eased back in over the next few weeks, he’s got to make some changes in that forward line one way or another.  Anyway, something to consider as we go into what’s likely to be a pretty quiet week overall.

Right, that’s that. We’ll have an Arsecast Extra for you this morning. If you have questions send them to @gunnerblog and @arseblog on Twitter with the hashtag #arsecastextra – that should be ready for you around lunchtime.