Welbeck talks, Jonker on his new role with the youth

Well, we’ve heard from our new signing, Danny Welbeck but nothing yet from the manager. This is because Arsene Wenger is in Switzerland at the manager’s conference for managers to learn how to manage and be managers in a managerial way, or something.

This picture, via @Sport_Witness shows former teammates Pep Guardiola and Luis Enrique with Jurgen Klopp giving them the side eye and Arsene Wenger in the background asking anyone if they know a decent, out of contract, centre-half (I kid): 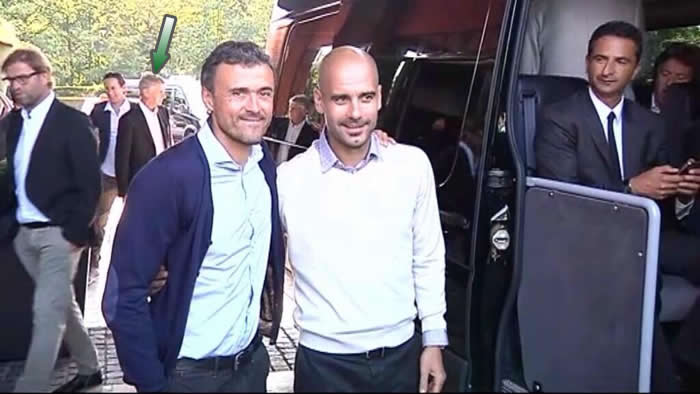 So obviously Arsene hasn’t been back since he brought about world peace in Rome the other day, but the new boy has had his first interview. It’s fairly generic stuff really about how he’s happy to have signed:

It’s exciting times for me. It’s great to be a part of this club and it’s a team that I’ve always watched in the Premier League. I’ve envisaged myself playing in this team before. For it to finally happen is very exciting.

And how he sees himself fitting into the team:

I believe the style of play the manager’s got and the boys play and with the magnificent players in midfield slotting balls through, I can run on to the end of those balls and slot them away.

How long have we been waiting for someone to run onto the end of our balls? Too long, let me tell you. And, of course, it’s a change of scenery for him:

I’ve been at United ever since I was a little boy and I had a great time there. I just think this is the next stage of my development – to come to Arsenal, to really show people what I can do as a footballer and hopefully get to the place where I want to be.

All in all, a fairly standard first interview for any new player: saying the right things about his new club, being respectful, as you would expect, to the club where he grew up and of which he’s been a fan all his life. Not that it stopped certain websites from twisting things:

Of course he did no such thing. He was asked directly if he felt Arsenal were a club on the up and, naturally, he said yes and pointed to the FA Cup win (if you didn’t know our first trophy in a decade). It was hardly ‘taunting’ his old club as some suggested. The key here, of course, is that the plethora of sporting websites out there mean that some resort to rank stupidity in order to get clicks. The best part though is that anyone with a modicum of intelligence could glean from an article like this that the website in question isn’t ever worth bothering with again.

The downside is that there are a lot of stupid people out there who believe everything they read. Anyway, with Welbeck on board, along with Alexis and the soon to return Theo Walcott, we’ve got a forward trio with more pace than we’ve had in years. In fact, Welbeck once ran a charity 200m race against a cheetah and a motorbike and beat both of them with metres to spare. That’s how quick he is.

Apparently he even came on for England last night against Norway despite talk of an ankle injury, so let’s hope he’s all right. Roy Hodgson also handed a debut to Calum Chambers while Jack Wilshere and Alex Oxlade-Chamberlain also figured, which is good news I guess, because every bit of playing time helps get us sharp ahead of what’s going to be a difficult game against Man City next week.

Meanwhile, the new head of the youth set-up, Andries Jonker, has spoken about his new role at the club and what he might bring to things. It’s been no secret that it’s gone a bit stale in recent years and his appointment, along with some of his hand-picked coaches, will hopefully kick things on.

Obviously there’s a footballing philosophy at Arsenal which they’ll be expected to work with. Arsene Wenger wants his players to be educated in a way which would make the step-up to first team football not as huge a jump as it might be, but this was an interesting little snippet from the Dutchman:

I think we should do that until a certain age, 15 or 16 years old, because there is a certain way of playing that we think is the best way to teach players how to play football. From that age on, they should learn how to win games. That is also where you can give coaches freedom, depending on their player group, of what way to play.

Perhaps, at times, there’s been too much focus on style of play ahead of pragmatism. It’s great to be a slick passing team but there’s also a time and a place for it. Sometimes you need to be a bit industrial so as not to put yourself in danger, and I think it’s telling that Jonker has specifically mentioned that winning is more important than how you win.

As with the arrival of the new fitness coach, it’s going to be some time before we see the benefit of their appointments. There’s no quick fix in either case, but it’s certainly a positive that we’ve addressed two key areas which were in serious need of improvement.

Right, not much else going on this morning. As it’s the Interlull we’re unlikely to have an Arsecast tomorrow but I’ll be very active during the day just in case something comes up.

Previous articleBalance at the back
Next articleWelbeck’s mellow gold