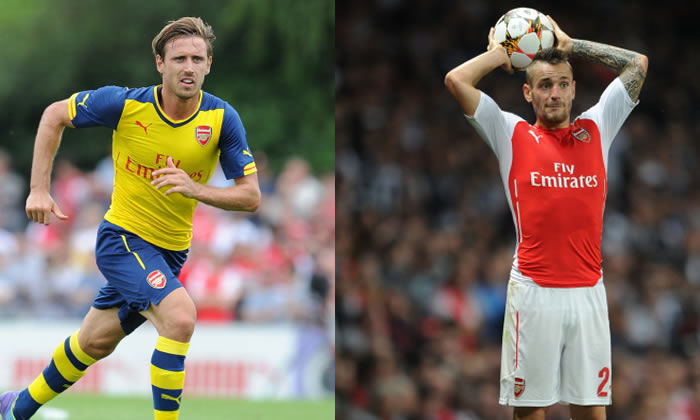 In his first column for Arseblog, @RoamingLibero looks at the full backs and the issue of defensive balance in the team.

The need for balance in partnerships in each position, and through a team, is widely acknowledged. But it is easy to overlook just how vital the equilibrium between attacking and defensive full backs can be to a team’s successes. The ideal example is the pair of Philipp Lahm and David Alaba at Bayern Munich. Both are extremely adept in both attacking and defending but the former is an inherently more defensive player, while the latter tends to push higher. This setup is replicated across most of Europe’s best sides and indeed, its disappearance from Barcelona since they swapped Éric Abidal for Jordi Alba has been one of the key reasons they have struggled to regain their defensive balance.

Since Arsenal’s reformation into a strong defensive unit in mid-2013, that balance has generally been evident. Bacary Sagna was unquestionably a defender above all else, while Kieran Gibbs is the more attack-minded player. Said balance was not quite so clear with the far-too-harshly-maligned Nacho Monreal in place of Gibbs, given his more conservative positioning and his tendency to do more of his offensive work on the edge of the opposition box rather than right at the byline, à la Gibbs, but it still worked well enough (most of the time).

So, instead of replacing the Sagna with a similar type of primarily defensive player, Arsène Wenger elected – or perhaps had his hand forced by an unhelpful market – to sign Mathieu Debuchy, whose only real similarities with Sagna are nationality and basic position. Debuchy’s main qualities show themselves in the final third of the pitch, and defending seems to be something of an afterthought for him. As much as this potentially creates issues for a team who relied more on preventing goals than it did scoring them, it could lend itself to something of a style change.

With Aaron Ramsey as the team’s main goalscorer for the vast majority of last season, and Mesut Özil as its central figure, most of the forward play tended to go through the middle of the pitch. But now, with Alexis Sánchez on board and Theo Walcott hopefully returning soon, the team distinctly has more of a right-sided flavour to it. If the plan to play Alexis as a centre forward is sustained until Walcott’s return, then the two switching between each other during matches, with Debuchy offering a wider outlet and a more threatening option in counter attacks could be a major source of chances for the team.

When Ramsey and Theo Walcott were both injured, the whole team – but most notably Özil and Santi Cazorla – struggled in the absence of off-the-ball runners. Özil specialises in finding pockets of space on the wings, and such a trio ahead of him on the right hand side instantly creates a layered and diverse threat, which could prove especially useful against ‘parked buses’.

For all the improvement in Sagna’s crossing last year, the fact that they came mostly from the 18-yard line area meant there would be one central target and one type of cross that could reach them. Debuchy operating closer to the byline not only gives more scope for different kinds of deliveries, but also allows those who arrive later, (Ramsey being the most obvious), more time to get into threatening positions.

An example of this can be seen in Ramsey’s first goal in the game away to Sunderland last season. Carl Jenkinson (filling in for Sagna, who was required at centre back), was almost level with the 6-yard line when he sent the cross in; but at that point, Ramsey had just reached the edge of the penalty area. The cross was perfect, the finish sublime, but it would not have been possible without Jenkinson breaking further forward than Sagna usually did. For all Sagna’s many merits, his inability to break beyond the defensive line since the second leg break limited the effectiveness of his attacking play for long spells, even though he adapted far better to that over the course of last season.

This change would also lend itself perfectly to Debuchy’s current understudy and potential successor Héctor Bellerín. Since being moved into the defence at 16, his development in that department has been constant and visible. He has the potential to really make a future for himself at the club, and at 19, he presents a very viable long-term solution, particularly as Debuchy is 29. Despite his significant and continued defensive improvements, he is still a distinctly forward-thinking player. A system built to accommodate the right full back being the more attacking is ideal for him and will also allow for an easier transition between the two. My personal belief is that, assuming his on-pitch growth continues as it has, Bellerín will be first choice within two years.

However much this presents a rather neat solution to the right-side setup, it still leaves the questions of how to cover for Debuchy and his errant ways, and how to balance the rest of the team if it is tilted towards the right. Debuchy himself has been caught too high up the pitch on a number of occasions this season. Calum Chambers mostly did well against Everton, but struggled significantly in places, to cover for him. In the majority of games it will probably be Per Mertesacker having to do two jobs. Mertesacker is a fantastic centre back but leaving him with that much space to cover is not ideal.

There is the possibility of shifting Laurent Koscielny to the right side, but he has often shown himself to be uncomfortable there. This is not to say that Mertesacker is incapable of dealing with a more offensive full back by his side at all, but Debuchy comes with added absent-mindedness. This could be somewhat less of an issue with a more mobile defensive midfielder, but until January at least, such an option is out of the question.

A conceivable solution to this is to give Debuchy a relatively deep base position (by his regular standards), with instructions to sit more in the middle third unless the situation demands he go further forward, similar to Monreal’s style now. It should mean he gets caught too high up the pitch far less and would ease the strain on the others, but arguably then inhibits Debuchy.

Systems with both full backs being more inclined to push on can work, but in a 4-2-3-1, it needs a very defensive and intelligent deep midfield setup – see Everton, with James McCarthy and Gareth Barry – and to use Ramsey in such a role would be a waste. This could also be the reason for the boss’ attempts to introduce a flatter, more protective 1-2 midfield shape, with the 4-3-3 or 4-1-4-1 that has been used so far this season.

There remains the question of balancing the right side with the left. Gibbs and Monreal are both oddly self-contradictory as players. Gibbs, the converted winger, thrives in stretching teams and sprinting towards the byline, but his final ball isn’t often good enough, while on the defensive side, he excels in duels. Monreal is the fundamentally more defensive but he is far stronger in the final third, and despite his usually strong positioning, can be prone to back off too much when attacked individually.

Though Gibbs’ defensive strength means he would be fairly comfortable in taking on the more withdrawn role, it would be limiting for his useful, if not especially effective attacking play. Monreal’s instinctively deeper positioning probably makes him a better fit in the majority of games, under the circumstances, though his struggles one-on-one present a worry against opposition with more skilled wingers. Either way, it spells both being pushed away from the final third, where both can offer a great deal.

At times last season, Arsenal’s forward going play was too predictable. A player of Debuchy’s type helps diversify things on that level, and he adds a pace that was distinctly absent for large spells, but the fear is that it comes at the expense of the defensive solidity that made this team so strong in the first place.

It can be done, whether it involves shackling the left backs or even Debuchy himself, it’s a solution Arsene Wenger has to find sooner rather than later.