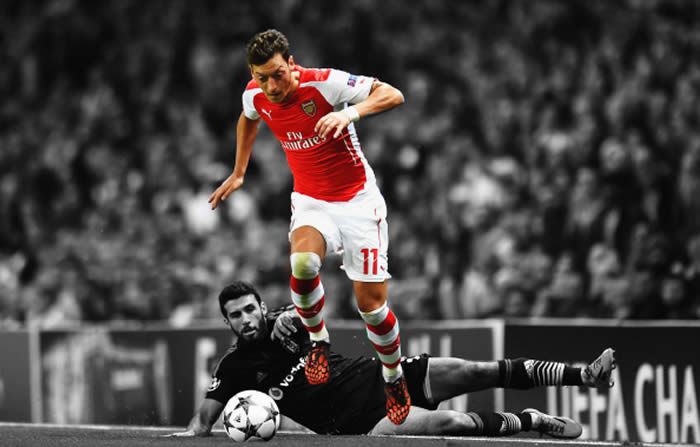 Starting with Arsene Wenger coming to the defence of Mesut Ozil. Now, you might ask why he’s had to come to the defence of a player who only arrived back at the club a couple of weeks ago and has got two games under his belt already but that’s the kind of world we live in now.

In maternity wards across the planet there are babies being born, letting loose their first, terrified cry, and pundits saying, “Well, that baby just isn’t good enough. He doesn’t look interested in this world.”

So it is with footballers. Wait until we get to a point where their performances, and futures, are dependent on the ratings they get from a mobile app. SnapBall. PlayJazz. KickSnap. Ftlbr. Whatever. You know it’s going to happen. And Ozil is a player who would suffer from that because of his subtlety.

However, we’re not at that point yet and while the manager acknowledges that there’s a perception issue, he sees the positives in his performances:

He reckons we’re going to have to wait until he gets four or five games under his belt before we see the best of him, and that’s reasonable. The whole team isn’t yet at its best physically but the more we play the more it looks as if things are improving on that front.

The main issue for me, however, is where exactly he’s going to play. I do wonder if him being played on the left is a way of building up his fitness more quickly, because there’s no doubt that his best position is central. It’s something Ozil himself touches on in an interview with Henry Winter in the Telegraph. He says:

I’m one of the best players in the world in that No 10 position. Fans, coaches, players and everyone knows that my best position is playmaker. What’s important is that the manager gives me his trust and in Joachim Löw and Arsène Wenger I have two managers who do exactly that. Both coaches know that my favourite position is the No  10. I’ve played on the left in a World Cup and for Arsenal but my best performances come as a 10.

I think that’s ultimately where he’s going to have to play for us if we want to get the best out of him. The slight shift in formation in the early part of the season might well be due to fitness issues more than a new style of play, so hopefully when everyone’s firing on all cylinders we’ll see the German in the position where he can really influence games. Even then, it was his clever flick which set-up the goal for Alexis on Wednesday night, so it’s not as if he’s negated completely.

The Telegraph interview is well worth a read, as is this piece in the Guardian from Barney Ronay. Not just for this line, but it rather stands out:

At times last season Özil resembled not so much a high-end creative midfielder as some beautifully frail alien prince being ferried around from pitch to pitch by 10 dedicated human helpers yoked into fawning submission by his regal Martian glaze.

I guess there’ll always be people who are unconvinced by Ozil because of his style; people who would prefer if he ran around a bit more obviously, perhaps gesticulating wildly, and sliding into tackles from twenty feet away. I’m just delighted we’ve got a player of his quality in our team and I’m looking forward to seeing him have a better season than his first, because I really think he will.

Away from that, the manager has spoken about the last days of the window being like a poker game (which resulted in one of the most disturbing Photoshops we’ve ever made), saying:

The last few days are poker games. There’s a lot of lies there in the few days, everybody is interested in the same player even if you’re the only one who wants the player.

And on his transfer intentions:

I will be actively involved but on the last day of the window. I will of course be on alert until the last minute of the transfer deadline.

However, it seems the more and more people suggest he HAS to buy a striker, the less inclined he is to do it. I think Tim Stillman’s column on Thursday is worth a read, because if Wenger’s plan was to move Alexis to the main striking role, then it’s hard to see him buy another player to fill that position. The plan might have been brought forward because of the injury to Giroud, so we may have to adapt on the fly so to speak.

My gut feeling is that we’re unlikely to sign a striker unless we can find somebody amazing and at this point I’m not sure who that is. People mention Falcao but as his agent is Jose Mourinho’s best chum I suspect that’s a minefield we’d almost be best avoiding lest we get led up the garden path. It was interesting to hear Wenger say yesterday that his experience means “you can call it a bluff when it is a bluff.”

It’s not as if we haven’t been there before in seasons past, so I think the idea of the Colombian coming is fanciful, to say the least. That said, with the manager clearly unconvinced by Podolski (whose Instagram suggested he was back in Germany last night – unless he’s posting old shots), I wouldn’t be hugely surprised if we managed to bring in a wide forward, whoever that might be.

As for what else might happen, your guess is as good as mine. Defender, defensive midfielder maybe. I don’t know, but I do get the sense we’re trying to make things happen between now and the close of the window. The first part of our transfer business this summer was very good, no doubt about it. We made the cake, now it’s time to ice it. Let’s see what happens.

Finally, another plug for yesterday’s Arsecast in which we try and work out exactly what we might do between now and Monday night.

Right, that’s yer lot, back tomorrow with a full preview of the game against Leicester. Until then.