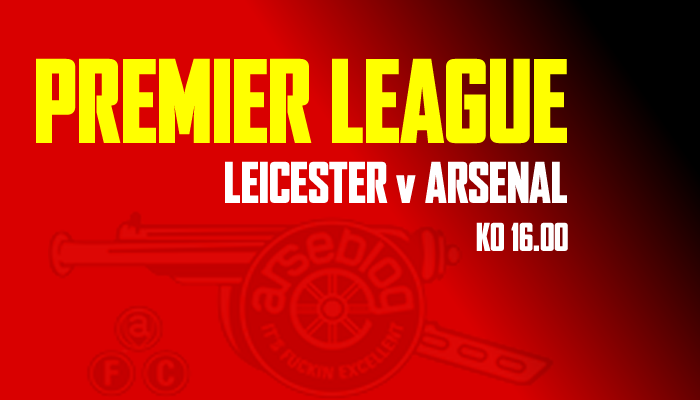 An away day before the Interlull as we prepare ourselves for Leicester City today.

It was, some time ago, a mainstay of the Premier League season. Managed by Martin O’Neill they were always a tricky side to face. Who can forget the threat of Muzzy Izzet? Anyway, this time around they’re newly promoted and as such I don’t know a great deal about them.

They had a good first day back with a draw against Everton but lost, as you would expect against Chelsea. They also had a bad day out in the Capital One Cup in midweek, losing to Shrewsbury (and a goal scored by a most excellently named chap). There’s an omen for you, if you believe in that kind of thing.

From our point of view the manager has probably got a bit of re-shuffling to do in terms of his team. Mikel Arteta is back in training and if fit enough (big if though) he could come in for Flamini, while Aaron Ramsey returns after his midweek suspension.

The interesting thing is how the manager changes things to put him back in. Does he leave out Wilshere, who had his best game of the season on Wednesday night? It would seem counter productive to do that, to say the least. Santi Cazorla was also excellent against Besiktas, while Mesut Ozil is going to be a key player for us this season and has to start. You don’t leave a player of his quality on the bench.

Maybe it’ll mean Alex Oxlade-Chamberlain sits this one out, he seems the most expendable. Which isn’t to play down his qualities, but only try and guess what Arsene Wenger will do with his team today. I think Alexis has to continue up front as right now he’s our best forward and the more he plays there the more comfortable he’s going to be in that role.

They’ve just come out of a very strong performance against Chelsea. It is a tough proposal for us because they also drew 2-2 against Everton at home and we need a great performance again. Hopefully we have recovered from our game against Besiktas and can focus on the Premier League, because that’s one of the important targets of the season.

And the manager is looking for us to improve in one particular area from Wednesday:

We looked powerful going forward, we looked mobile. The negative is that we couldn’t transform our chances into goals. But that’s the easiest thing to improve. We created chances – you cannot do that in training but in training you can work a lot on the finishing and improve that.

It would certainly have taken some of the excitement out of the last 15 minutes if Cazorla, Alexis or Oxlade-Chamberlain had put the game to bed, so hopefully today we’ll a little sharper in front of goal. Overall though, when you look at the two sides you have to think this a game from which we really should be taking three points.

There were a couple of interesting results around us yesterday with City losing and Chelsea winning. There’s also Sp*rs v Liverpool today, so if they could drop a couple of points each and kick each other into kingdom come in the process, a win today would do very nicely indeed.

In other news, well, there really isn’t anything concrete about potential new arrivals (or departures) beyond reports from Portugal yesterday saying that Joel Campbell’s agent was in Lisbon discussing a loan move with Benfica. The Mirror this morning have direct quotes from Arsene Wenger, who said:

We have had a lot of offers for Joel and have turned them all down. There are plenty of clubs – I don’t know exactly how many because once I said to my assistants, ‘He will not go out on loan’, if somebody calls them they don’t even tell me any more because, when I say no, it’s no.

He will not go out on loan. So that’s that then, I guess, but once more there’s a vagueness about the manager’s words when it comes to the young Costa Rican. Portuguese paper Record today says there’s a €10m offer waiting for our decision with the player open to a move to Portugal because he feels he’ll play more regularly. Well, at least we don’t have long to wait until we know for certain.

Beyond that there’s some talk of us trying to hijack Chelsea’s deal for Loic Remy and as far as new faces go that’s it. I suspect tomorrow might well a busy day though (and we’ll have a deadline day live blog as usual), but for now, the most important thing is taking the points against Leicester.

We’ll have full live blog coverage of today’s game. Simply check back here later on for a post with all the details or bookmark our default live blog page and updates will begin automatically.