First of all, let us get the matter of the match-up against West Bromwich’s Finest Albion, loveable plucky whipping boys of the English League, sponsored by ‘Kick Me’ and perfectly positioned above the bottom three to pose no obvious threat. Really, we should have put five or six past a team of this ‘quality’, but the whole game had the air of end-of-term games lesson about it. One was half expecting the teacher to tell everyone they could go and play board games and eat toffee if they wanted before a Chaplin film was screened in the refectory, but no, the football continued. A noggin bobbler from The Brigadier, his 22nd goal of the season. Two fat ducks. Quack quack. Very good. But a little more vim next term, please.

We move on to the plight of Poor Old Liverpool, a club well and truly off its collective onion. Their insufferable blighter of a captain, Mr. Gerrard, the Scouse John Terry, has instigated quite the collapse. It is of Arsenalistic proportions, to the extent that Mr. Gaye-Seedless, our beloved leader, should consider suing them for the offence of ‘passing off’. Listen, Liverpool, you buggers, WE do the collapses around here. It was a particularly irksome one this year, was it not? Everything was quite bonhomous for 128 days of the season and then like a drunken vicar attempting to access the crypt after dark, we toppled and toppled, cracking our heads and twisting our knees as we fell.

Can you imagine the pain of being five points clear with three games to go, having the league’s sharpest striker, a squad untroubled by any other competition and then losing the title? Their squandering of a three goal lead this week was quite the Lawrence of Arabia of SNAFUs, was it not? Mr. Gerrard should clearly be put on half-hourly checks and his belt removed if what we are fairly sure is going to happen happens this weekend. And poor Senor Suarez, weeping like a counterfeit statue of Mother Mary. At least, with his demure shielding of his weeping face we were spared sight of his teeth, which are an offence against God and man – and that’s coming from an Englishman.

One notices this week as one perambulates around the capital this photograph. 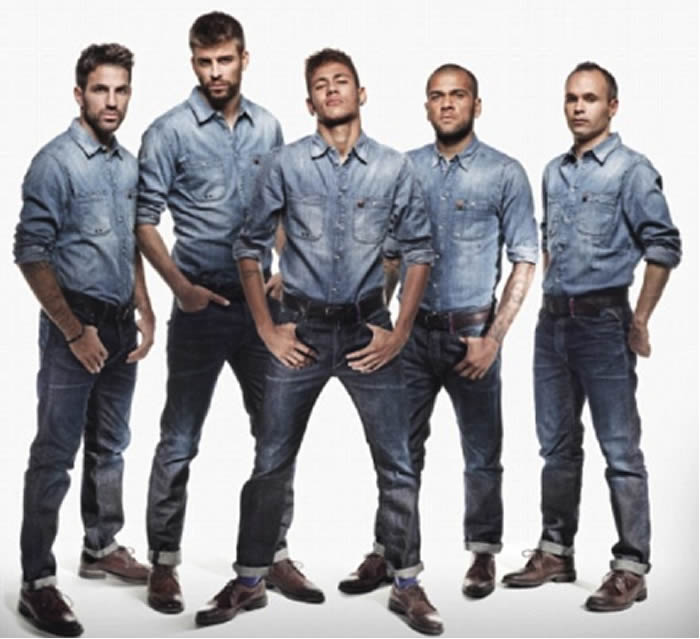 On first glance ‘tis a gang of angry Yankee cowpokes looking for their ten gallon hats. It is not, of course, it is a gang of blighters from Barcelona. No wonder Mr. Fàbregas looks unhappy in this picture. He is Barcelona’s Eboué and apparently is open to a move back to Arsenal. Well, well, well, is that right. Because from where I am sitting (Diamond Club, naturally) it looked very much like he went on strike, forcing Arsenal to accept less than his market value. So if he wishes to return, he should be punished appropriately. He should be treated by the Arsenal Medical Team and made to watch one Tottenham Hotspur Football Match.

Monsieurs Gibbois and Ramsara return for our countryside jaunt to Norwich Yokels and Wilshère is in contention. With our twelve-toed chums from East Anglia virtually relegated, let us tear them a new proverbial. And do remember, if you are making the journey to Norwich please don’t be distracted by odd looking boys playing banjos by the side of the river.