Dear reader, a very queer thing happened to me this week. It was one of those occasions when one finds oneself questioning the order of the universe. For when the hour was almost ten this Wednesday night last, I raised my eyes to the heavens, and I wept at the same time as Hateful plebeian Mr. John Terry. Why is this happening, I asked myself? Blubbing like a five year-old whose hobby horse has been removed? At boarding school, crying was an offence punishable by one of the housemaster’s special hugs. In the Guards, it was punishable by firing squad. The only time an Englishman should cry is RUDDY WELL NEVER.

And yet there we were, John and I. He, weeping wonderful tears of despair. No doubt he was looking forward to a nice sit down after the match, probably in his Bentley – the car in which he parked in a disabled bay outside a Pizza Express in 2008. Mr. John Terry wept, and wept and wept. Here he is, weeping. The finest sight in English football. 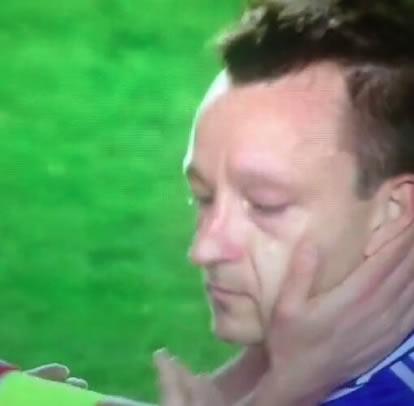 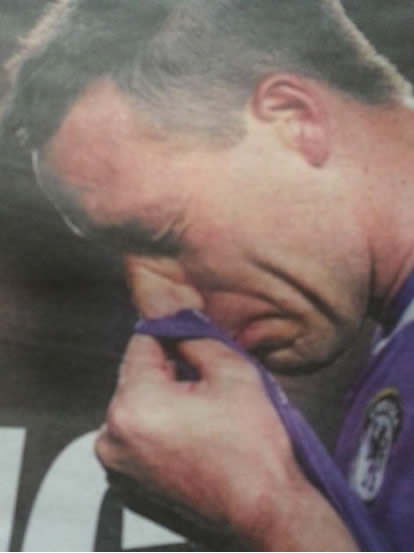 My own tears were of course tears of unrestrained joy. Such ecstasy it was to see this putrid, rank & rotten club, with its unearned riches and its pot-bellied racists, its South Korean nine year olds and its chief executive who refuses to do the honourable thing and fight me on Highbury Fields for his repeated besmirching of Arsenal’s good name. How every right-thinking man and woman despises them and their vulgar, purchased success brought to them by their preening mountebank Mourinho. A pleasure it most certainly is to see them out of the European Cup.

Now at least, he shall be gone, as he explicitly to promised depart Albion if he didn’t win any trophies. Thanks to @irishgunners for the image. 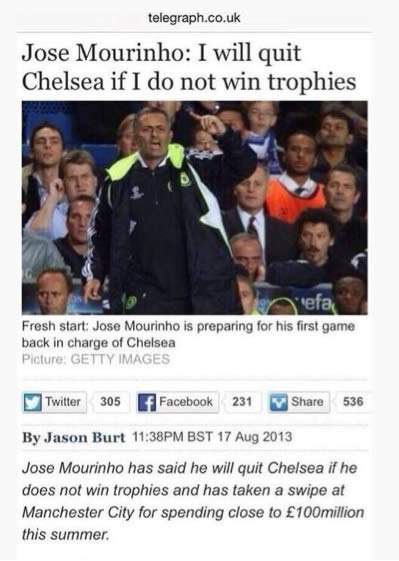 So unless the cad is football’s biggest hypocrite, we have seen the last of him and his tailoring.

Something of a stroll past the unfortunate Magpies, who are now resembling the barcodes on the last minute specials, with the yellow borders, that some of my more poorly paid members of staff rush out to buy at 7pm on a Saturday evening at their local supermarket. You know the stuff. Ten pork pies for a guinea. Some hard rolls, a shilling. A suspicious smelling Indian meal for a florin. Those type of barcodes. Mr. Pardew, their manager for another week or so, is something of a pignut, and it is always a pleasure when he loses. I once saw him dining with Thierry Henry, formerly of this parish, in the Landmark Hotel on London’s Marylebone Road. Mr. Henry looked bored out of his mind with the conversation; lots of polite smiles and kind laughter, and he was mightily relieved when he saw me approach. We exchanged a few pleasantries, and all the while he was motioning over his shoulder to poor Mr. Pardew and rolling his eyes. One wonders where he may end up next season. Perhaps – dare we dream – the White Hart Lane piss trough?

Which brings us, once again, to the feast of St Totteringham. I now bring to you the traditional and ancient verse, ‘Twas the Night Before St. Totteringham’s’, a poem read every year before the annual feast. Apologies to Clement Clarke Moore:

Twas the night before St. Totteringham’s, when all through N5

Not a gooner was stirring, not even a child.

The kits were hung by the front door with care,

In hopes that St Totteringham soon would be there.

The gooners were nestled all snug in their beds,

While visions of Costerley danced in their heads.

And Madam in her ‘kerchief, and I in my cap

Had just settled our brains for a long late spring nap.

When out on the lawn there arose such a clatter,

I sprang from the bed to see what was the matter.

Away to the window I flew like a flash,

Tore open the shutters and threw up the sash.

The moon on the breast of the newly-built ground,

Gave the lustre of mid-day to objects around

When, what to my wondering eyes should appear,

But a shimmering saint, stood there clutching a beer.

With a red and white kit, he was looking so hot,

I knew in a moment it must be St Tott.

More rapid than eagles his chanting it came,

And he whistled, and shouted, and called them by name!

On, Orwell! On, Jack! Flame, now hurry along,

Speed him along, that splendid Saint Tott!

And then, in a twinkling, we shall hear that cry,

That comes every year despite how they try,

As we leap up and down and spin all around,

Down to earth St Tott will come with a bound.

He’ll be dressed red and white, from his head to his foot,

He’ll point at the number and say “See here!

They failed once again, perhaps it shall be next year!”

His eyes-how they’ll twinkle! his dimples how merry!

His droll little mouth will draw up like a bow,

And the beard of his chin will be white as some snow.

He’ll be chubby and plump, a right jolly old gooner,

“It comes every year, usually sooner,

They spend so much and I hope it’s not rude,

One time I had to poison some Italian food!”

“Their Euro hopes lying there buried and dead,

You’d think they’d be happy with fifth place each year,

He’ll spring to his feet, to the team give a whistle,

And away they’ll all fly like the down of a thistle.

But we’ll hear him exclaim, ‘ere he drives out of sight,

“Happy St Totteringham’s to all, and to all a good-night!”

Splendid times. And with Woolwich just three point away from securing the magnificent Fourth Place Trophy, and with it another nerve-jangling European adventure, is this season representative of progression from last year? A trophy? By JOVE, Sir, it is. Hats off to Windsor!*

*And then hats back on to see if he spends some more ruddy tin this summer.