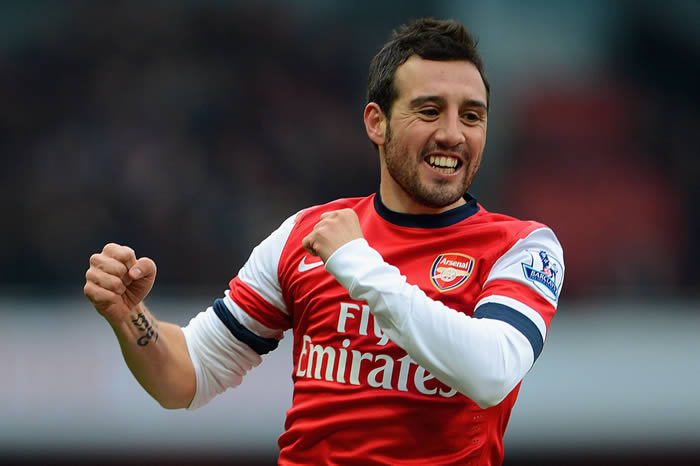 A lot was made yesterday of some quotes from Santi Cazorla in which he questioned the team’s mentality and suggested that better recruitment of players was crucial to any success we might have.

What’s odd to me is that he echoed the thoughts of many, yet for some the initial reaction was ‘Well, shut up, you’re part of the problem.’ I suppose it’s telling that the reaction is to criticise the person who is criticising, rather than address the criticism itself. That’s the world we live in now.

My thoughts are that he hasn’t said anything that we haven’t said ourselves at some point, nor was he excluding himself from any responsibility. For example, he said:

We haven’t got a winning mentality and we have to believe in ourselves more. Sometimes you can get used to not fighting, but we can’t do that. Arsenal is and will always be a historic football club, we have to look forward.

Note the fact he says ‘we’. He is including himself. The fact that he’s played poorly this season doesn’t make what he says any less valid, does it? He’s not the kind of player who goes hiding in games either, so why there was this desire to turn on him is beyond me. What he’s saying is not made fallacious because his own performances have been a bit below par. Questions have long been asked about our ability to win things, and while our failure to go the distance in the title challenge this season isn’t down to one single thing, a mental brittleness at key moments has played a huge part.

Going back to the issue of performance v criticism, when we talk about fatigue as a factor in our collective displays, why is there such little understanding of how Cazorla himself might be affected? He played at Euro 2012, joined Arsenal, played all 38 league games last season (the only player to do so), started 57 times in total for Arsenal and Spain, then, rather than getting any rest, he had to go to the Confederations Cup so his summer was banjaxed and even so he’s started 37 games this season.

I’m not making excuses for him, but I just find the unwillingness to look for reasons behind things a bit annoying. If we can excuse Mesut Ozil’s poor form because of a lack of players around him to make him more effective, surely the same is true of Cazorla who is a similar kind of player? His obvious frustration at what was or, more pertinently wasn’t, happening around him at Goodison Park tells you he’s suffering without the same players we want Ozil to have at his disposal.

And perhaps that goes to his comments about signing new players. It was a common theme last summer for the first team players to go public with their desire for Arsenal to sign players, better players. Check it out. While the signing of Ozil was fantastic, it didn’t happen until 90 minutes before the transfer window closed and as brilliant as it was, it was a reactive rather than proactive piece of business.

Arsenal has everything to win; history, infrastructure, an incredible stadium and great players but we have to improve at crucial moments and sign the best football players because if you don’t do that, you may lag behind others.

How anybody can possibly argue with that is beyond me. Is that not what we all want? For the club to use its resources properly and bring in the best players it can? For Arsenal to go through a season with more than one striker? A decision which, now that things have gone from good to bad, that looks more and more indefensible. Even Olivier Giroud himself said it, despite the fact he changed his tune later.

I know I’ve been frustrated by our inability to act more decisively in the transfer market, so if there are players who also see it as a missed opportunity to strengthen the squad then it’s no surprise. They know as well as anyone that having better players will increase the chances of success.

Some bemoaned the timing of the quotes (which may be more down to when the quotes were released rather than the timing of the interview) – especially as we have an FA Cup semi-final on Saturday. I would posit that not wining in our last four games is much worse in terms of timing than a few home truths from a single player. And maybe airing this in public has only happened because it’s been done to death behind closed doors without the required reaction.

As I said, it just seems odd that some people immediately ignore the message and go straight for the man. I think Cazorla is right: we do lack a winning mentality. Not just the team, but across the board. With all due respect to the men involved, when your summer consists of a former player signed for free and a young kid from France who is so physically unprepared for the Premier League that you have to send him away for months to get him bulked up, you can’t help but question the thinking behind it.

Is that the club doing the most it can with the money it has to make the team better? I don’t think so. We’re content to drift along and if the right deal comes along at the right moment we’ll go for it. On the pitch we’ve been found out away from home – again I’m convinced that’s an issue of mentality over quality – and there seems to be something holding us back all the time.

Maybe it’s this monkey on our back, these trophy-less years. How often have we heard people say we just need to get that one win under our belts and things will change? Well, we’ve got an amazing chance to do that this season in the FA Cup. A semi-final against Wigan provides a great opportunity to reach the final, and the opposition would be either Hull or Sheffield United. And we’re Arsenal.

If Cazorla’s comments lead to some introspection, maybe even conflict, then I’m all for it, frankly. Meek acceptance of defeat, and no reaction to it, is tiresome now. Maybe it will provoke a reaction and fire up the troops. We need something to get us going again, and criticism, despite what some people would have you believe, isn’t always a negative. It’s can be a way of sorting out problems and making things better.

As we prepare for a big weekend – one that requires everyone to pull together – let’s look at what positives we can take from what Cazorla has said, rather than be outraged he’s dared to speak so honestly in public. I’d much rather the players knew there was a problem rather than stick their heads in the sand and say nothing.

Back tomorrow with an Arsecast, and we can start to look forward, even with trepidation (!), to Wembley on Saturday.