We must avoid the dodgy nightclub + Arsecast 314

A football-less weekend awaits us as we don’t play Newcastle until Monday night.

Arsene’s press conference will take place today and we should get the usual team updates, although I’m not expecting much. Maybe a slight return for Kieran Gibbs or Thomas Vermaelen, but that’s about it. Hopefully there’ll be no bad news, nobody will have picked up a training ground knock and we’ll go into this one without any drama.

The weekend sees Everton travel to Southampton and we’ll obviously be hoping that their trip isn’t a success, giving us the chance to extend the lead rather than slip out of the top four (even temporarily). On the one hand, seeing how well they dispatched Man Utd would give you pause for thought, on the other the fact that United’s players knew Moyes was a dead man walking probably contributed to how woeful they were last week.

Southampton have been very good this season and Pochettino is an interesting young manager, but they’re now at a point where they have nothing left to play for this season. There’s no chance of European football and even if there were I’d feel less confident because who wants to play in the Europa League?

Those who suggest a year out of the top four for Arsenal would spark some kind of revolution in the way we think have to balance that against the horror of playing in a tournament which is the equivalent of wandering into a nightclub when you’re way too drunk and you should go home and all they serve is Liebfraumilch and the DJ is a) talking and b) playing Vogue by Madonna and all the people who can still stand and aren’t being sick between their feet are actually vogueing.

Nightmarish in the extreme. Which, I suppose, is something that will be on Everton’s minds although for them I don’t think it would be as bad because they’re not as used to the VIP room of the Champions League as we are (a place where people rarely vogue and there’s all kinds of drinks not just cheap white).

Still, it doesn’t make for a great weekend when you’re simply looking out for other results, but what can you do? The television companies have spoken and that’s why we’re on the Monday night.

There’s little or no news this morning, other than Lukas Podolski talking about a possible return to the Bundesliga at some point, which isn’t shocking in any way. His club, FC Cologne, have been promoted back to the top flight, and obviously he’d be interested in going back at some stage, saying:

In the Bundesliga, my thoughts naturally turn first to the FC Cologne. That is much more than a club for me, this is my home. Maybe I’ll play again with them, this is for me always an option and matter of the heart. You never know in football. Sometimes everything happens very quickly.

To be fair he did say he had a contract with Arsenal, and one that he wanted to see out, but as I mentioned yesterday a summer departure for him wouldn’t surprise me one bit. I guess we’ll find out soon enough.

That aside, in the comments on that article, Frank from Vienna posted this link to a fabulous Ian Wright goal, which reminded me of one of my pet hates in football – when the keeper gets a touch to a shot like that. I don’t know why, but it really annoys me, as if it takes some of the gloss off the goal.

Like Ray Parlour’s in the FA Cup final. I mean, I love that goal like I love bacon sandwiches, but the touch that Cuducini gets just robs it of something extra special. Maybe I need to rethink things. Perhaps I’m overlooking the fact it leaves the keeper, and the opposition fans, even more frustrated because it was nearly a save. Or maybe I shouldn’t worry about it at all.

Finally for today, before we get on with this week’s Arsecast, here’s a look at one of the exclusive player illustrations from the upcoming book. 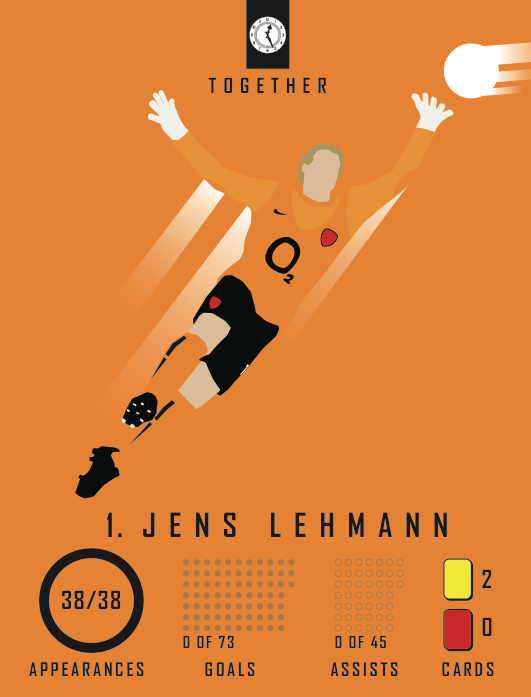 Here are the details about the book and the launch, and if you want to do the whole Facebook event thing you can do that. Today is 10 years to the day that we clinched the league title at White Hart Lane, much to everyone’s amusement. Everyone expect Sp*rs fans, of course. And the launch itself takes place 10 years to the day that we beat Leicester to ensure we went through the entire Premiership season unbeaten. Mark it down in your diary!

Right then, time for this week’s Arsecast, and I’m joined by Goodplaya to discuss the general goings-on, especially in light of a piece he wrote this week about why this season hurts so much after our Premier League collapse. There’s also some Andrei Arshavin doing impressions, a chance to win a poster from printmygoal.com and all the usual bits and pieces of inane waffle.

You can subscribe to the Arsecast on iTunes by clicking here. Or if you want to subscribe directly to the feed URL you can do so too (this is a much better way to do it as you don’t experience the delays from iTunes). To download this week’s Arsecast directly click here – 29mb MP3.

So there you go, all news, team updates and the rest can be found on Arseblog News throughout the day, more here tomorrow. Have a good one.