Hull 0-3 Arsenal: Ramsey shows everything that Arsenal have been missing

It’s been a long time since winning a game felt that comfortable, but for all our efficiency and re-found attacking fluidity, we did have to cope with an opening 20-25 minutes that tested us at the back.

From the very start it was obvious that Hull’s game plan was press high and to try and rattle us physically. It cost Mikel Arteta a tooth (or more likely a crown as an ‘Arsenal Dentist’ emailed me after the game), Nacho Monreal was lifted off the ground by a kick from Meyler, and Wojciech Szczesny was the busier of the two keepers.

Despite the fact referee Jon Moss failed to award us a penalty for a trip on Ozil, Szczesny made a fantastic 15th minute save from Jelavic and, as Hull lashed in a series of corners, set-pieces and crosses, the big Pole was utterly commanding right from the start. He caught, punched and dealt with everything they threw at him which allowed the team to settle, and then take control of the game.

That it was Aaron Ramsey who drove Arsenal on should be no surprise and the opening goal was the kind we’ve come to expect from this team, but haven’t seen often enough lately. Spinning inside an opponent near the halfway line he fed Mesut Ozil and kept running. Ozil effortlessly held off a couple of challenges before playing a superb pass to Santi Cazorla on the edge of the box – the precision and weight of it was just perfect. That allowed the Spaniard to poke it into the path of the still running Ramsey who took a touch and fired home from close range.

I don’t think there should be any controversy about the second goal either. Hull’s complaints for a free kick were understandable, especially as those are the kind you get throughout games, especially at home. But the fact is Jelavic was looking for it, there was no real contact from Arteta and ref didn’t buy it. Arsenal broke from deep, Ozil fed Giroud who stepped inside, took a look up and delivered a brilliantly weighted ball to Aaron Ramsey who had run half the pitch to give us an option. His chest down fell almost perfectly for Lukas Podolski who readjusted slightly before slamming the ball home on the volley. A great move and an outstanding finish from the German.

That Ramsey was involved in our third should come as no surprise. Steve Harper made a fine save from his low shot (set up by Santi Cazorla), but Podolski was poaching (Poachdolski?) and he made sure from the rebound to make it 3-0 to Arsenal, just ten minutes into the second half. At that point there was simply no way back for Hull.

After being quite deliberately elbowed in the face by Elmohamady, Giroud almost made it 4-0 after chasing down the keeper, winning the rebound and smashing a shot on the slide off the underside of the crossbar from a tight angle. And when Alex Oxlade-Chamberlain came on he was clearly tripped in the box but the referee played an advantage because an Arsenal player was in exactly the right position to have a shot. Yes, Ramsey. How did you guess? The shot was saved, it still should have been a penalty, but it didn’t matter for once.

Mertesacker fizzed a header over the bar, and Arsenal decided that possession was key. They just passed it around, Hull knew the game was up so couldn’t be arsed trying that hard to get it back, and the contrast between what we did yesterday and games when we’ve been desperately trying to find an equaliser or a winner couldn’t have been any clearer. I know which I prefer, that’s for sure.

It was a big win. I think the first half was very physical and played at a very high pace where our defenders needed to be very strong in the air on crosses. I believe as well that we looked dangerous when we went into their half and took advantage of that. In the second half when we scored the third goal it looked like we completely controlled the game. Overall it was a positive performance because I think if you look at our individual performances all over the pitch they were good.

What was most pleasing to me was the manner of the goals we scored. It’s been a struggle to find the net at times recently, but to see us score with such quality and incision was fantastic. Of course much of that has to do with Ramsey, the man is just amazing in terms of what he does and how he does it. Look at his heatmap: 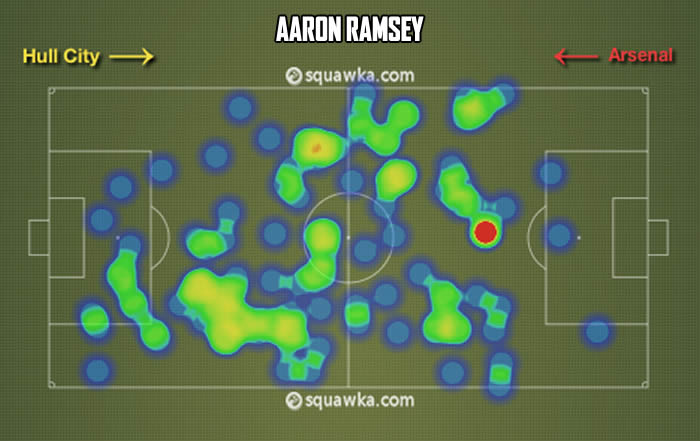 He is the new breed of box to box midfielder. He can defend and he’s hugely conscientious about his duties in that regard, but his first instinct when we have the ball is to get forward and support the attack. But it’s how he gets forward that’s key. He doesn’t amble upfield in the vague hope that something might happen, he busts a gut to get there to make something happen. His progress in the last 18 months has been little short of remarkable and I genuinely believe that for all our other shortcomings this season his absence is what has cost us most in terms of the title challenge.

I’d suggest it’s the equivalent of Liverpool trying to do without Luis Suarez for three months. Would they be sitting so pretty at the top of the table now? I don’t think so. It doesn’t mean we don’t have other issues, but I really think a fit Ramsey would have ensured our league campaign didn’t fizzle out the way it did.

Mesut Ozil’s return was a little more understated, but very promising too. His part in the first goal has been somewhat overlooked, the pass to Cazorla was just brilliant, and with a good hour of football under his belt, and a full seven days from now until the Newcastle game he’s got plenty of time to work on his overall fitness.

Despite the fact that Everton didn’t drop any points as they toyed with Manchester United, it was a good day for us. A solid win, a very encouraging performance, and a team that – as Arsene Wenger said – looks like it’s got the oil back in its engine.

Although it is a bank holiday and other podcasts will make you wait for your dose of aural goodness, there’s no such shiftlessness round these parts. James and I will be here with an Arsecast Extra before lunchtime, so if you have any questions fire them to @gunnerblog and @arseblog on Twitter with the hashtag #arsecastextra and we’ll get to as many as we can.

Finally for today, the winner of the Carlsberg competition is: Andy Wedge, well done to you. I’ll be in touch and we’ll get the stuff sent out to you.