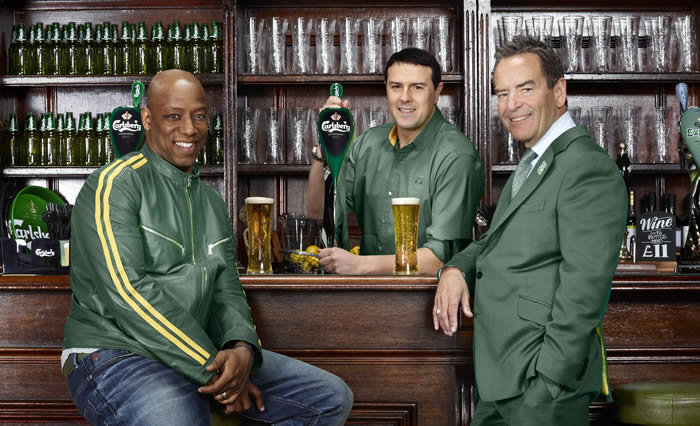 Wrighty is involved with Carlsberg for their Carlsberg Fan Squad World Cup ad, and he kindly grabbed a few bits from the set and signed them for us. Not only that, he also got his co-stars Paddy McGuinness and Jeff Stelling to sign them too. Thanks to Wrighty’s light fingered ways, we have everything you need to turn your pad into the ultimate fan experience for the season run in and the World Cup.

The Carlsberg Fan Squad is a task force led by Ian Wright, Paddy McGuinness and Jeff Stelling with the aim of making football better for fans. They’re giving away tickets to Barclays Premier League games every week via @CarlsbergUK and are taking 1,000 England fans to Wembley for the San Marino game in October for the Ultimate England Experience (go to www.carlsbergfansquad.co.uk to enter). They’re also making sure your local can show all the best games, and recently co-funded a subscription package providing pubs and clubs with a discount of up to 50% on a BT Sport subscription (“That calls for a Carlsberg!”)

The gear up for grabs, all taken straight from the set of the TV ad, includes:

All you have to do to turn your place into the “Eternal Optimist”, the pub featured in the Carlsberg World Cup ad, is answer this question:

From which club did Arsenal sign Ian Wright? Was it:

Answers to [email protected] before Sunday midnight. Winner announced on Monday. Please note: this competition is open to UK entrants only.